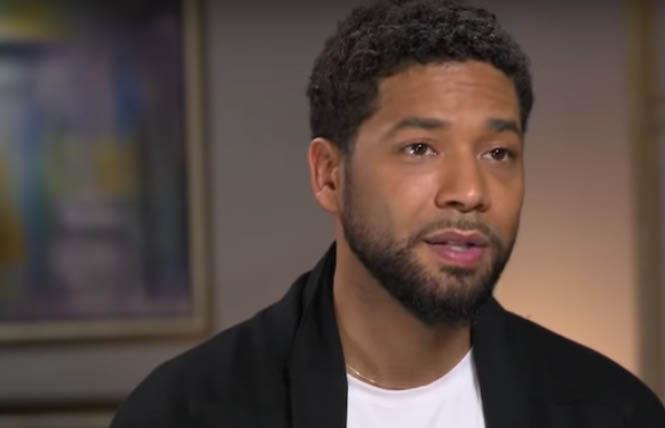 The jury in the case of actor Jussie Smollett reached a guilty verdict December 9 in his trial on five felony charges that he faked a hate crime and was responsible for orchestrating it in January 2019.

The jury deliberated for just over nine hours after the one-week trial saw closing testimony and arguments Wednesday afternoon.

Smollett, 39, convicted on five counts of disorderly conduct, a class 4 felony, is facing potential sentencing of up to three years in prison. According to a Chicago criminal defense attorney speaking on background, he contended that based on his experience with the legal system in the Chicago court system, that the actor will likely be placed on probation and ordered to perform community service.

Smollett, testifying in his own defense, told the court that he was physically attacked around 2:30 a.m. on January 29 by two men who hurled homophobic and racist slurs at him, including the phrase "MAGA country," a reference to former President Donald Trump's presidential campaign slogan.

The former "Empire" star was previously indicted by Cook County prosecutors in February 2019 after law enforcement authorities alleged he had conspired with two friends to stage the attack because he was dissatisfied with his salary from the Fox series and wanted to generate publicity to boost his career. In March, the charges against him were dropped, with little explanation from prosecutors — though at the time presiding Judge Michael Toomin suggested that he could be charged again.

The second indictment came from special prosecutor Dan Webb, who was appointed to the case by Toomin after the initial charges were dropped. In a statement, Webb said that Smollett was charged with six felony counts of disorderly conduct, connected to four separate false reports that he gave to police in which he claimed to be a victim of a hate crime "knowing that he was not the victim of a crime."

After initially investigating the incident as a hate crime, Chicago detectives in their sworn affidavits and testimony noted that their investigation uncovered that Smollett paid brothers Olabinjo "Ola" and Abimbola "Abel" Osundairo, who are from Nigeria, to stage the attack.

During their testimony last week, the Osundairo brothers told the court that the actor had recruited them to fake the attack near his home in downtown Chicago. They testified that Smollett who is gay and Black, instructed them to put a noose around his neck, yell racist and homophobic slurs, and rough him up in view of a nearby surveillance camera.

Evidence presented by the prospectors showed the two brothers in a local retail store purchasing the rope and other items used to stage the attack that Chicago police determined the actor paid for.

On December 8, Webb told the jury that Smollett caused Chicago police to spend enormous resources investigating what they believe was a fake crime the Associated Press reported.

"Besides being against the law, it is just plain wrong to outright denigrate something as serious as a real hate crime and then make sure it involved words and symbols that have such historical significance in our country," Webb said.

Webb also cast doubts on Smollett's integrity and credibility in his testimony, telling jurors that the surveillance video from before the alleged attack and that later night contradicts key moments of Smollett's account of the events.

Smollett's defense attorney, Nenye Uche, disputed the Osundairo brothers' testimony, labeling them "sophisticated liars" who may have been motivated to attack the actor because of homophobia or because they wanted to be hired to work as his security. "These guys want to make money," he told the court.

The special prosecutor during the trial also took aim at the actor's refusal to turn over his cellphone to investigators or give them a DNA sample or access to his medical records to help with the investigation. Smollett testified he doesn't trust Chicago police, and that he was concerned about his privacy.

"If he was a true victim of a crime he would not be withholding evidence," Webb said.

Smollett's defense attorney told the court that it was "nonsense" for police to ask the actor for his DNA when he was still considered the victim of a crime. He also noted Smollett later provided DNA to the FBI for a separate investigation into hate mail he had received at the studio for "Empire" shortly before the alleged attack. "He wasn't hiding anything," Uche said.

The Chicago Tribune reported that Smollett remained stoic as the verdict was announced. He was found guilty on five of six counts. The first five counts related to Smollett's conduct on the day of the incident, while the sixth related to his conversation with a police detective.

Cook County Circuit Judge James Linn set a January 27 hearing date for motions in the case prior to the actor's sentencing.

The actor's lawyers said after the verdict that they are set to file an appeal but his legal problems also extend to the city of Chicago's civil lawsuit against the "Empire" star demanding he repay the city $130,000 — the cost of the police investigation into the incident he reported as an alleged hate crime.