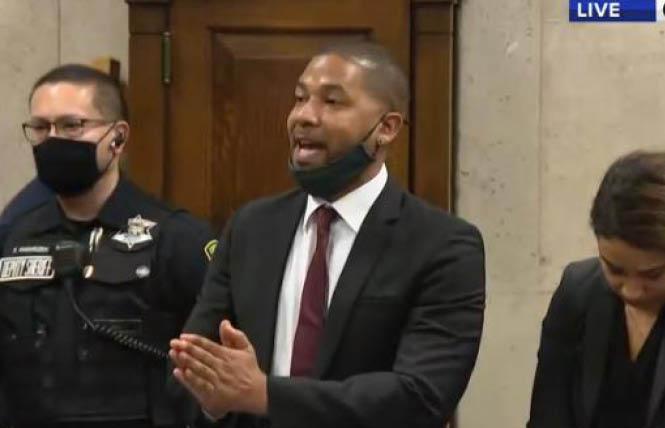 Cook County Judge James Linn sentenced gay actor Jussie Smollett to 30 months of probation and 150 days in jail for lying to police about a racist and homophobic attack that he staged. Linn also ordered Smollett to pay $120,106 restitution to the city of Chicago and a $25,000 fine.

The former "Empire" star's request for new trial was denied ahead of sentencing.

Smollett, 39, who had made the March 10 appearance in Linn's courtroom shortly after 1 p.m. when he walked into the Cook County Leighton Criminal Courts building surrounded by family members and his defense team, first sought to have the jury's verdict overturned on legal grounds.

ABC7 Chicago's Diane Pathieu reported that Linn told Smollett and his defenders: "I do believe at the end of the day that Mr. Smollett received a fair trial, that he was proven guilty beyond a reasonable doubt by a jury based on the evidence that was presented."

Linn also took the actor to task telling him, "I'm going to tell you Mr. Smollett, I know that there is nothing that I will do here today that will come close to the damage you've already done to your own life."

During the testimony prior to sentencing, Smollett's 92-year-old grandmother, Molly Smollett, told the court; "I ask you, judge, not to send him to prison — if you do, send me along with him, OK?"

According to ABC7 Chicago, special prosecutor Dan Webb asked Linn to include "an appropriate amount of prison time" when sentencing the actor for his conviction. Webb said he would not ask for a specific amount of time, leaving that to Linn's discretion.

He also asked that Smollett be ordered to pay $130,000 in restitution to the city of Chicago.

The actor was offered the opportunity to speak, but declined, saying he agreed with his attorney's advice to remain quiet. However, as court deputies took him into custody, Smollett insisted that he was not suicidal, suggesting that "if anything happens" in jail, he did not take his own life.

"If I did this, then it means that I stuck my fist in the fears of Black Americans in this country for over 400 years and the fears of the LGBT community," Smollett said, standing up at the defense table as his lawyers and sheriff's deputies surrounded him. "Your honor, I respect you and I respect the jury but I did not do this. And I am not suicidal. And if anything happens to me when I go in there, I did not do it to myself. And you must all know that."

As deputies led him from the courtroom, Smollett shouted out again.

"I am innocent," he yelled, raising his first. "I could have said I am guilty a long time ago."

The sentencing caps off a three-year series of investigations and two trials since the actor told Chicago police he was the victim of a racist and homophobic attack in January 2019. He was convicted of five of six felony counts of disorderly conduct for lying to police and had faced a maximum sentence of three years in prison for all counts.