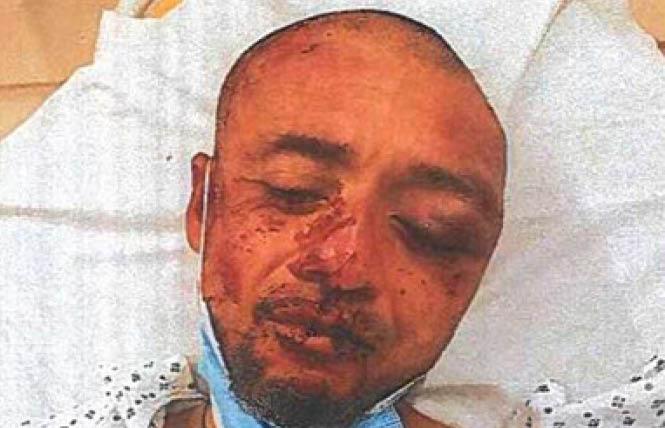 Criminal charges have been dismissed against a gay San Francisco man who was allegedly beaten by police during an altercation in the Castro last year.

Sergio Lugo, 42, was severely injured during what the San Francisco Public Defender's office called an "illegal detention" in a January 12 news release.

According to the public defender's office, Lugo was falsely accused of assaulting a San Francisco Police Department officer when plainclothes police illegally detained him in February 2021. Police claim that the altercation resulted in superficial wounds to an officer. The defense presented evidence, including eyewitness testimony from neighbors, who described what they observed as a "beating" of Lugo.

On February 17, 2021, plainclothes officers observed Lugo walking around the Castro district in the early morning hours, the public defender's office's release states. "Although he had committed no crime, two officers detained and questioned him. When they told Mr. Lugo that they intended to search him, Mr. Lugo asserted his right not to be searched and told them that he intended to walk away. Without any verbal warning, the two officers grabbed his arm, kicked his legs out from under him, and pinned him on the ground," the release states.

Other photos and an internal police report obtained by the San Francisco Standard come after Police Chief William Scott expressed disappointment in District Attorney Chesa Boudin for deciding to drop the charges against Lugo.

"I'm disappointed with the district attorney's decision in this case," Scott stated. "Mr. Lugo resisted arrest and violently assaulted our officers, injuring one of them with an X-Acto knife. These kinds of attacks are unacceptable and shouldn't be tolerated by our criminal justice system. When they are, it sends a dangerous message that emboldens criminals to use violence — and not just against police officers."

The photos obtained by the Standard show one officer with cuts to his pinky and knee, but Lugo with a fractured cheek bone and cuts and bruises to his head after having been punched 15 to 20 times, according to the Public Defender's office, which also confirmed Lugo's identity as a gay man in a phone call with the Bay Area Reporter.

"The police had no right to detain, search, initiate force, and escalate force against Mr. Lugo who committed no crime," Lugo's attorney, Deputy Public Defender Alexandra Pray, stated in a news release. "Police created this situation, and given the evidence, the prosecution finally did the right thing and dismissed these charges."

The B.A.R. first reported on Lugo's arrest in an article last March. Police stated that on February 21, around 5 a.m., two officers at 21st and Castro streets were conducting a burglary surveillance operation when they detained Lugo.

In a news release at the time, the SFPD stated that Lugo had originally been cooperative.

"During the struggle, Lugo produced an edged weapon and lunged toward one of the officers," the news release stated. "Lugo stabbed the officer in his left hand and left knee. A second officer injured his hand during the struggle. Following the assault, officers were able to place Lugo into handcuffs and restrain him. The officers and Lugo were transported to a local hospital where they were all treated for non-life-threatening injuries."

Lugo was arraigned last February 19 and pleaded not guilty, according to the public defender's office.

Pray told the B.A.R. at the time that "from our perspective, Mr. Lugo was acting in self-defense and it's not even clear he was using the knife in self-defense; it was a chaotic scene where the officers were on top of him and they went too far in trying to physically subdue him."

Pray said that "the alleged stabbing was in response to a physical altercation, but prior to [Lugo] being punched in the face."

Rachel Marshall, a spokesperson for Boudin, stated that the case against Lugo was not winnable.

"We carefully reviewed all the evidence in this case, including statements, surveillance, the fact that police officers were not wearing body worn cameras, inconsistencies in police officer statements, the fact that Mr. Lugo was behaving lawfully when stopped by police, and the photos of the injuries of all parties — which depicted severe injuries to Mr. Lugo, whom police badly beat during this encounter — and it was clear that this was not a provable case," Marshall stated.