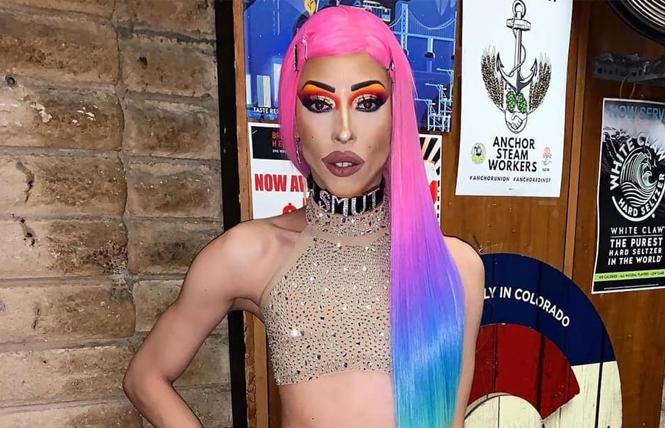 A Union City man will be arraigned April 29 on charges he murdered a transgender woman last week in Milpitas.

The killing of drag performer Natalia Smüt Lopez, 24, of San Jose, sent shockwaves through the South Bay's LGBTQ community. She is the 16th victim of anti-transgender violence this year in the United States, according to the Project MORE Foundation, a nonprofit service provider to South Bay LGBTQs.

Segura will continue to be held without bail until the arraignment takes place. It was originally scheduled for the afternoon of April 27 at the San Jose Hall of Justice, but Segura's attorney, Peter Johnson, asked for more time to meet with his client, and that request was granted by Santa Clara County Superior Court Judge Vincent J. Chiarello.

Segura called 911 around 2:30 a.m. April 23, the district attorney's office went on to state, and officers responding at a residence in Milpitas found Lopez with multiple stab wounds. Segura had visible blood on both of his hands and was arrested at the scene. Lopez was pronounced dead at a hospital.

Santa Clara County District Attorney Jeff Rosen stated that it is the "everlasting hope" of prosecutors to see violence against the trans community come to an end.

"Our hearts go out to Natalia's loved ones," Rosen stated. "We are committed to getting justice for our community against those who commit domestic violence and violence against transgender and nonbinary people."

Johnson, who is defending Segura, is based in Walnut Creek. He could not be reached for comment by press time.

Lopez's family was at the San Jose Hall of Justice April 27 for the originally scheduled arraignment.

Another news release, from Mothers against Murder, a Los Altos-based nonprofit that advocates for crime victims, is calling attention to a GoFundMe account seeking financial support for Lopez's family. The fundraiser had raised $10,000 out of a $22,500 goal as of April 28.

"Our hearts are aching," Lopez's sister, Vanessa Singh, stated. "We are still in shock and overwhelmed with painful feelings. We feel a need to be present in court when the accused appears before the judge to face the charge of murdering my beautiful sister."

The GoFundMe is being organized by Lopez's friend, Kiara Ohlde. "Natalia was ... so young and so full of life! She was fabulous," it states. "She would step into a room like a firework. Everywhere she went, she brought energy, fierce looks, and a personality that shined bright like a diamond. Her beautiful soul and presence is no longer here on earth with us anymore but she is forever in our hearts. If anyone can find it in their heart to donate to help support the family, we would appreciate it so much as this was so sudden. Honestly, anything helps. Thank you. We love you Natalia [Smüt] Lopez and we will continue to seek justice for you until justice is served. All money goes directly to Natalia's older sister, Vanessa Singh."

Victim remembered
There was an outpouring of mourning for Lopez in and around San Jose's new Qmunity District last weekend. A community vigil was held in her honor April 24 at City Hall, and Mac's Club hosted a potluck the following day. The queer district centers on Post Street. The color of the lights in the Qmunity District were changed to the colors of the trans flag for 16 days beginning April 24.

"[Lopez] was known best for her motivating and creative spirit, captivating performances, and her love for advocacy within the community," Nathan Svoboda, a gay man who is president of the Project MORE Foundation, wrote in an email. "Project MORE and the Qmunity District extend their condolences to loved ones, friends, and the community members who knew Natalia and to everyone triggered by this tragic incident."

Speaking with the B.A.R. April 26, Svoboda said the vigil "was coordinated by members of the drag community and members of the family, just kind of an organic thing happening."

"Where we got involved is we coordinated and managed with the Qmunity District in downtown San Jose," Svoboda said. "Our part was to do what we could do for Natalia, to bring awareness to the senseless violence trans people are experiencing, people of color are experiencing, and have for some time."

Svoboda expressed his sorrow that Lopez died at such a young age.

Lopez could have helped others, he noted, come into their authentic selves, too.