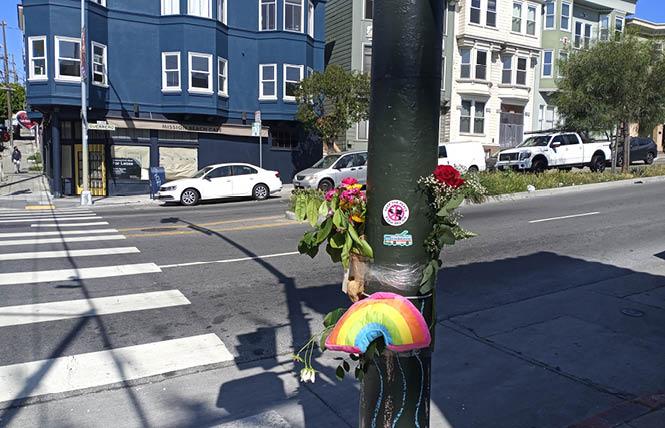 A memorial was set up at 14th and Guerrero streets honoring bi transit advocate Courtney Brousseau, who died after he was shot at the intersection May 1. Photo: Scott Wazlowski

Gay District 8 Supervisor Rafael Mandelman hosted an online town hall May 27 to answer questions about the recent Mission District shooting that killed a bisexual transit advocate and injured one other person.

"This is our opportunity to talk about the horrific incident that occurred," Mandelman said in his opening remarks. "In speaking with the immediate neighbors, it seemed like there was an interest in having a meeting."

As the Bay Area Reporter previously reported, Courtney Brousseau, 22, died several days after he was shot May 1 at around 8:22 p.m. at the intersection of 14th and Guerrero streets. A second person was injured in a fuselage of 50-60 gunshots.

Captain Gaetano Caltagirone of the San Francisco Police Department's Mission Station could not explicitly say much about the investigation into the shooting.

"It's an ongoing investigation and I can't reveal a lot about it because I don't want to jeopardize the case," Caltagirone said.

Caltagirone did say, however, that SFPD's gang task force was trying to identify suspects and make an arrest.

"It's a sad situation, what happened," he said. "It's just a tragic thing.

"We're continuing to have high visibility in the area, and what I'm asking community members is if you see something suspicious — like a car without a license plate — call 911. You can be anonymous," Caltagirone added.

James Caldwell, representing the office of Mayor London Breed, suggested that the May 1 shooting was related to other violence in the Bay Area.

"It's spilled over from things going on around the city," Caldwell said. "There have been issues with Valencia Gardens [the complex near where the shooting occurred.] There has been some cross-county work in trying to de-escalate the violence that's coming from San Francisco, Oakland, Richmond, and San Jose, and how these young men and women are maneuvering throughout the Bay Area. ... A task force has been put together to quell the violence, to ensure that young people take responsibility for their own neighborhood."

Later in the meeting, Caldwell said that innocent people in San Francisco often end up being targeted multiple times unintentionally due to a practice known as "phone pimping."

"Phone pimping — they make a phone call trying to target one individual, and bystanders get hit," Caldwell explained.

Caldwell said that "we're having a season" of the kinds of barrages of gunfire that killed Brousseau.

"There's been a rash of gunfire — multiple rounds — in different areas of the city," Caldwell said. "There's been a high rate of it happening for a couple months."

When asked by Mandelman, Caltagirone said that he could not guarantee violence wouldn't break out in the area again.

Sam Moss, executive director of the Mission Housing Development Corporation that owns and operates the Valencia Gardens complex, said he thinks there is less violence in the area than previously.

"We've been running it for at least eight years. Anyone who remembers the old Valencia Gardens knows it's night and day," Moss said. "Not to say that what happened should happen. ... Our residents felt concerned and were pleased to know we joined the efforts of [Mandelman] to talk about this."

Several virtual attendees of the town hall questioned Moss about why a large gathering in and around the complex before the shooting wasn't broken up, and why the shooting was only mentioned at the monthly apartment meeting at the end when someone broached the issue.

"It's not Mission Housing's policy to overly police our tenants," Moss said. "I know it's frustrating and some people think we should move everyone along."

Virtual attendance was limited to 100 people, but only around 60 attended.

Less than 20 minutes after the meeting ended, the SFPD made an announcement about multiple arrests in the Sunnydale and Ingleside neighborhoods, including one in March that involved 30 shots from multiple firearms, and one in May that involved 40 shots.

"These incidents are part of a recent increase in gang-related shootings that have occurred in several neighborhoods in the City," the SFPD statement reads. "The SFPD Gang Task Force worked with officers from the Patrol and Investigations Bureaus to develop leads and information. The investigation resulted in securing multiple search warrants in connection with the shootings."