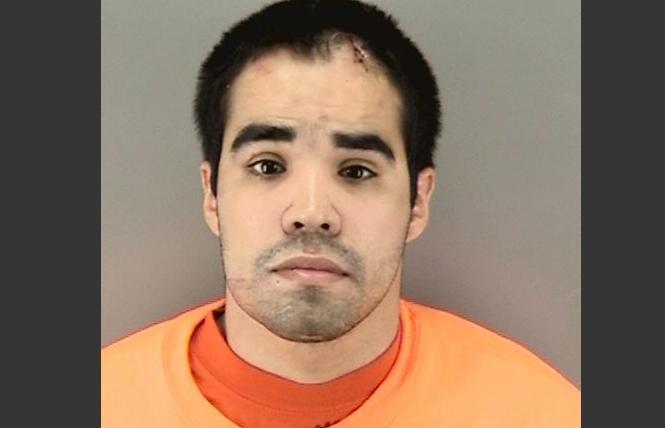 Convicted arsonist David Munoz Diaz pleaded guilty Friday, November 8, to three felony counts before he could stand trial in an attempted murder case, according to a spokesman for the San Francisco District Attorney's office.

Diaz, 29, pleaded guilty to arson, possession of an incendiary device, and vandalism and is expected to be sentenced to four years and four months in prison, according to DA spokesman Alex Bastian.

As the Bay Area Reporter previously reported, the charges stemmed from a February 2018 incident when Diaz allegedly lit a homeless person on fire, according to charges filed by the DA's office.

On February 19, a couple walking on Folsom Street found a fire in the vicinity of a homeless man who was incapacitated due to intoxication in front of 1060 Folsom Street, according to the couple's August 2018 court testimony.

While they were assisting the homeless man, Diaz approached the couple and helped put the fire out. Then he asked them to call the police, according to court testimony.

Later, surveillance footage from three different businesses showed Diaz lighting the fire, according to testimony that same month from Stephen Engler, an investigator with the San Francisco Fire Department.

"You can see through the opaque glass a person lying on the other side and then another person approach, squat down between the glass and sleeping person, and then you see a flash of light from the person's hand," Engler said at the time.

Diaz was initially charged with several arson-related charges and attempted murder, but the attempted murder charge was dropped as part of the plea deal, according to the DA's office.

Diaz was represented by the public defender's office, which did not immediately return a message seeking comment.

This is not Diaz's first run-in with the law involving arson charges.

In 2014, Diaz stood trial for the June 2011 death of Freddy Canul-Arguello, 23, in Buena Vista Park. During the trial, Diaz testified that Canul-Arguello had asked to be choked during a sexual encounter and that he'd accidentally killed him.

Prosecutors said that Diaz lit the body of Canul-Arguello on fire. The arson count was dismissed by the judge during sentencing so that Diaz wouldn't have to spend the rest of his life as a registered arsonist.

But after his release in the Canul-Arguello case, Diaz was again arrested in 2015 after he was alleged to have started a series of fires in the Castro district, including at the Up Hair salon on 18th Street next to the Mix bar.

Diaz pleaded guilty to possessing an incendiary device in 2016 and was then made to register as an arsonist.

But that wasn't the end of the Diaz saga. Two months after becoming a registered arsonist, Diaz was again arrested for assault, battery, and false imprisonment after allegedly biting off a chunk of a man's scalp and handcuffing another man while impersonating a police officer outside of a South of Market nightclub.

Sentencing will be in January.