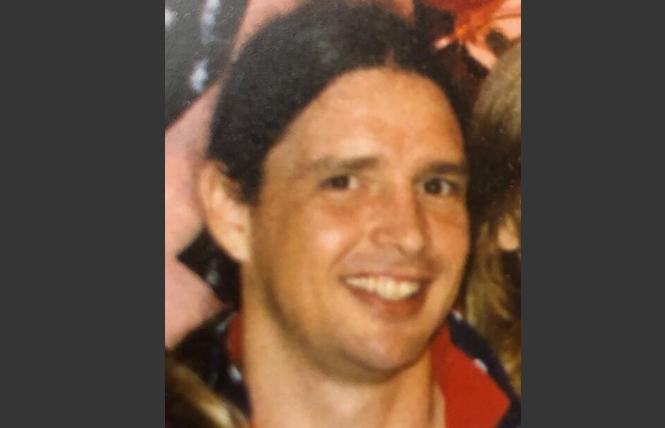 A young Brian Egg attended a party at the Stud bar in the late 1980s. Photo: Courtesy Scot Free

On the one-year anniversary of the grisly discovery of Brian Egg's headless torso in a fish tank in his South of Market home, no one has been prosecuted for the homicide. The San Francisco Police Department is still refusing to release details on its initial response to suspicions from neighbors about Egg's disappearance.

Egg was a 65-year-old gay man who once worked as a bartender at the Stud bar.

"I've truly lost hope for justice for Brian and faith in the SFPD," Egg's close friend and neighbor, Scot Free, told the Bay Area Reporter last week. Free helped rally support from neighbors to keep the pressure on police after Egg went missing. Police said he was last seen in late May or early June 2018. His torso was discovered last August 17.

Free's frustration was echoed by Egg's older brother, Devon Egg, who, like Free, believes Egg's killer is Lance Silva, 40, who was initially arrested for the murder but never prosecuted for the crime. San Francisco police stated in a news release last year that the San Francisco District Attorney's office "discharged" the charges pending further investigation but DA spokesman Max Szabo told the B.A.R. that the DA's office never received the case from the police. Silva was held on a probation violation out of Alameda County until his release from jail in April.

Devon Egg said that since his brother's death, he learned that his brother's bank account was drained in the days when he was missing. He told the B.A.R. last week that his brother sent him a $50,000 check in the spring of 2018 to help buy a home but he never cashed it. After his brother's disappearance, Devon Egg was suspicious and took the check to the bank just to see if there were sufficient funds to cash it. The bank told him there wasn't even close to that much left in the account. Devon Egg said that the bank eventually had to return about $70,000 in stolen money to the estate after acknowledging it was taken in a fraud. The brother said he hoped police were able to obtain surveillance video from the bank of the man who apparently was posing as his brother to withdraw the money.

According to court documents, Silva used Brian Egg's credit card and cash to buy a 2007 BMW 750 on June 1, 2018. Officials cited that as a reason to revoke Silva's parole for a conviction of stealing money from the retirement fund that belonged to employees of an upholstery business that he ran in Emeryville.

Police said that after they got calls from neighbors reporting Egg's mysterious disappearance last summer, officers went to the home three times but never tried to enter the property. Neighbors said that after police left the property after one of the visits, Silva could be seen furiously cleaning. Soapsuds could be seen leaking from the house and they could smell bleach.

Officers were called to the house again last August 14 after getting calls from neighbors after a crime scene cleanup company arrived at the home. They arrested Robert McCaffrey, 53, outside the home. He was there to meet and pay the crew. He was later released. Silva was arrested two days later at a South of Market residential hotel. Free told the B.A.R. that he saw McCaffrey recently walking around the streets in San Francisco.
Police then discovered a corpse with its head and hands missing in a fish tank that was hidden in the home. It was identified as Egg's.

Neighbors were critical of police for not taking their concerns about Egg's disappearance seriously and for not entering the home until after the cleanup crew showed up. Police have refused the B.A.R.'s multiple requests for documentation on the number of calls they got from neighbors about Egg's disappearance. They also refused to release police body camera video of their visits to Egg's house. Police said they would not release that information because the case is still under investigation. Police routinely release information on cases under investigation but leave out details that would hurt the investigation if made public.

SFPD Chief William Scott declined the B.A.R.'s written request for an interview about his department's handling of the case. When asked about the case by a reporter outside of a police commission meeting in October, Scott referred questions to David Stevenson, the department's director of strategic communications. Stevenson said Scott could not talk about the case because it is under investigation. 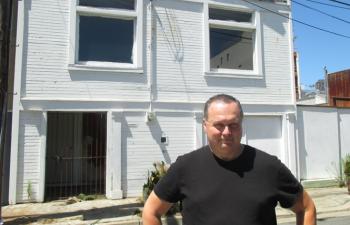 House sold
Egg's house at 228 Clara Street was sold in May for $1.5 million to a Sonoma couple, Shahram and Brittany Bijan. Egg purchased the house in 1976 for $19,000. Shahram Bijan is named as a developer for a six-unit housing project that is currently under consideration in Sonoma. Phone messages to Shahram and Brittany Bijan were not returned.

California Senator and Democratic candidate for president Kamala Harris owns a condominium on the same block as Egg's house. Property records show she bought the unit soon after the building opened in 1998. Free said that it's obvious when she is in town because of the Secret Service detail parked outside the building. He said he often sees Harris' sister, Maya Harris, on the block. An email to Harris' press office was not immediately returned.

Having a high-profile property owner on the block has not insulated it from the problems of homelessness and drug addiction that continue to plague San Francisco. Free said he and his neighbors have had to run off homeless people who have tried to set up camp in front of Egg's former house and he has seen transients hop the fence to the backyard of the home where they could easily gain entrance to the home through the backdoor.

The B.A.R. observed a hypodermic needle next to one of the house's two front doors Monday, August 12. The wood around one of the doors' locks was damaged and it appeared that someone had tried to pry off the doorknob lock. A man was rocking back and forth and talking to himself while sitting across the street from the house. Free said he told a homeless man to move along earlier that morning after he tried to set up camp in front of the home.

Free has stayed in touch with Devon Egg.

"We are both deeply disturbed about Brian's yet to be discovered head and hands," he told the B.A.R. last week

Devon Egg said he and his two siblings will inherit his brother's estate. He said he planned to use the money to donate to an organization that could help, but not enable, people who may be struggling in San Francisco with addiction or other problems. Devon Egg said when he visited San Francisco for the first time in about 50 years last September, he was disturbed by the homeless problem in the city. He said his brother always tried to help people and he wanted to continue to help people in his brother's memory.