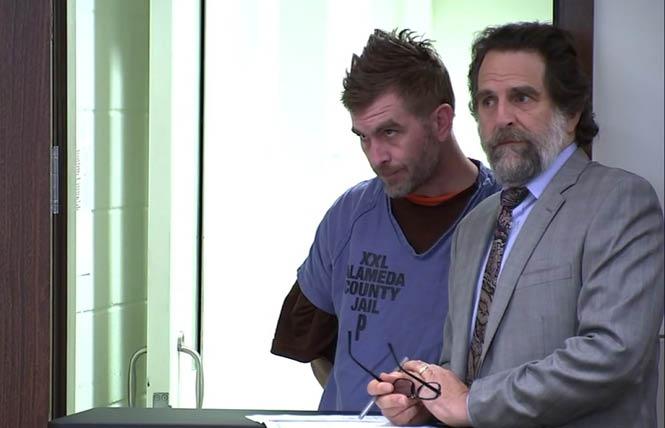 Lance Silva, left, a onetime suspect in the killing of Brian Egg, was released from jail Wednesday. Photo: Courtesy KGO-TV

The onetime suspect in the death of Brian Egg, a gay man whose decomposed torso was found in a fish tank in his South of Market home last summer, was released from jail Wednesday, April 24, the Bay Area Reporter has learned.

Lance Silva, 40, was being held on an Alameda County parole violation in Santa Rita Jail in Dublin. San Francisco police initially arrested Silva and another man for Egg's homicide but the district attorney's office dropped the charges pending further investigation.

"This is a travesty. What a shocking development," Egg's longtime friend and neighbor Scot Free told the Bay Area Reporter Wednesday. "The one-year anniversary is looming but still no real developments. Looks like justice won't be served in this case. Disgusting"

Free learned of Silva's release from the B.A.R. He said that even Egg's family was unaware of his release.

Egg's older brother, Devon Egg, 69, didn't know about Silva's release until after he was freed Wednesday.

"I am very angry about this, the brother said. "I got no notice about this."

The brother added that he was taking solace in his Christian faith, that he forgave Silva and that he believed justice would be done.

"I have confidence that this is going to come to fruition and that Lance Silva is not going to get away with what he has done," the Devon Egg said.

Neighbors said that Silva had been living in the home during the time Egg was missing. Egg's brother, Devon Egg, told the B.A.R. that he called his brother in late June or early July and an answering machine picked up. He was suspicious because his brother never used an answering machine and the recorded greeting was not his brother's voice. The voice asked callers to leave a message. He called again later and someone answered the phone who identified himself as Nate. He said Egg was out walking his dog and that he would have him call right back. No one called back.

San Francisco police initially arrested Silva and another man for Egg's homicide but the district attorney's office declined to file charges, pending further investigation. Silva had previously been convicted in 2015 for stealing money from the retirement accounts of employees who worked for an upholstery company he once owned in Emeryville.

San Francisco police and the D.A.'s office have not immediately responded to the B.A.R.'s requests for comment. According to jail records, Silva was freed as of April 24. The reason listed for his release was "sentenced served."

"I am not in a position to condemn the police," the brother said "I don't know if I could do a better job than the police did. There were a lot of mistakes, all along the way. If I can forgive Lance Silva, I got to be able to forgive the SF Police Department. We all make mistakes."

Updated, 4/25/19: This article was updated to include comments from Devin Egg.