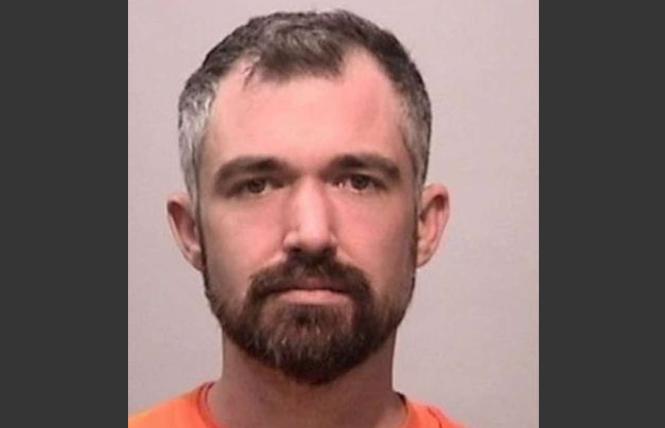 A gay Australian DJ has pleaded not guilty to felony charges of kidnapping and child endangerment following a bizarre incident in the Castro whereby he allegedly grabbed a 2-year-old boy and took off with him.

Roscoe Bradley Holyoake, 34, of Perth, is being held without bail, according to the San Francisco Sheriff's Department.

Holyoake entered his plea April 18, according to the San Francisco District Attorney's office.

The incident occurred Friday, April 12, at around 12:30 p.m., when Holyoake allegedly approached a 32-year-old mother at Jane Warner Plaza in the Castro and grabbed her 2-year-old toddler, running off with the boy in his arms. According to a report in Hoodline, bystanders gave chase to Holyoake, who placed the child down and continued running. Several bystanders caught Holyoake at 17th and Noe streets and held him until the police arrived.

According to the sheriff's department's inmate locater, Holyoake also faces misdemeanor charges of assault upon an officer and emergency personnel, resisting a peace officer, and battery.

Bill Pung, co-owner of Orphan Andy's, a popular Castro eatery, told the Bay Area Reporter that one of the restaurant's surveillance cameras captured the incident. According to Pung, a camera on the front of the building filmed Holyoake standing near the door to the restaurant. The video shows Holyoake grabbing the child and running down 17th Street, but does not show the bystanders detaining him. The footage was handed over to the police, Pung said.

"It was awful to watch a crime happening right on our camera," Pung said. "You hear about these stories happening all the time, but to see it happening right at your doorstep takes it to a different level. I'm thankful that the bystanders were able to detain this person. They risked becoming victims themselves."

DA spokesman Alex Bastian said that Holyoake's next court appearance is May 10, for a pre-trial hearing.

Holyoake is being represented by Steve Olmo of the San Francisco Public Defender's office, who declined to comment on the case.

According to SF Gate, Holyoake was previously investigated for a February 27 incident in Australia in which he was found at a Sydney apartment complex, asking a stranger if he could play with their child. At the time, Holyoake was transported to a local hospital for a medical evaluation.