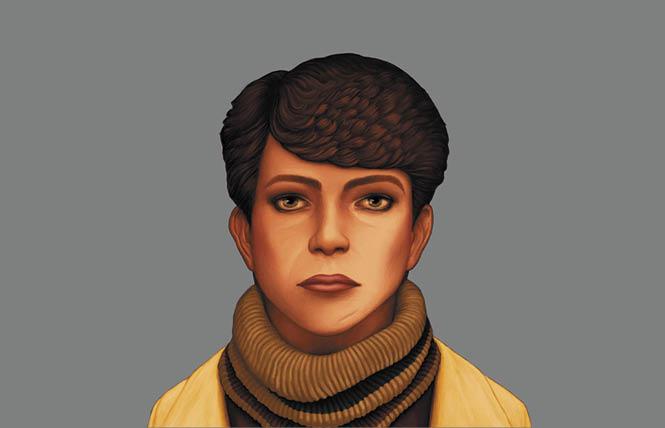 A sketch of Pillar Point Doe, whose body was found in San Mateo County in 1983. Illustration: Kim Parkhurst

A San Mateo 1983 cold case involving the murder of an unidentified possible trans woman has garnered renewed attention thanks to a Trans Doe Task Force at the DNA Doe Project.

On November 26, 1983, the remains of a man, age 19 to 25, dressed in female casual attire was found near Lower Pillar Point in Half Moon Bay, about 30 miles south of San Francisco. Because the identity of the victim is unknown, the Bay Area Reporter will use they/them pronouns to refer to them.

"It's a classic overkill of a trans person," Redgrave told the B.A.R. Friday. "We don't have any information on how the victim identifies, but are assuming they must have been a trans person based on the way they were dressed, modest clothing, but still tucking. They were wearing Capri pants, not dressed up for clubbing. We are assuming, but we can't know anything for certain until we know who they are."

The task force brought the case to the attention of the San Mateo County Sheriff's and coroner's offices, which it has partnered with since January on the case, along with the National Center for Missing & Exploited Children. In the most recent San Mateo County newsletter circulated Thursday, March 22, it mentions the cold case and links to a post on San Mateo County's Facebook page.

"The San Mateo County Coroner's Office is hoping for a successful outcome with finally identifying and providing a name for this 35-year cold case homicide victim," read the March 20 post that said the image of the victim was produced by the National Center for Missing & Exploited Children as requested by the coroner's office (the B.A.R. featured that image in a front page August 8, 2002 story that had also sought the public's help in identifying the victim).

The social media post also claims that the victim "may have been transported to the location from the Tenderloin area of San Francisco." Redgrave said, however, that the detective working on the case has said there is no evidence to corroborate this.

"As far as the investigation it seemed like it was treated as well as it could have been at the time, due largely to the coroner in the area having a very high interest in doe cases," Redgrave said. "It seemed to have been given more adequate care than I have seen in other places."

He also said that the San Mateo Sheriff's Office is "doing a really good job."

The San Mateo Coroner's and Sheriff's offices and the National Center for Missing & Exploited Children could not be reached for comment before this article was posted.