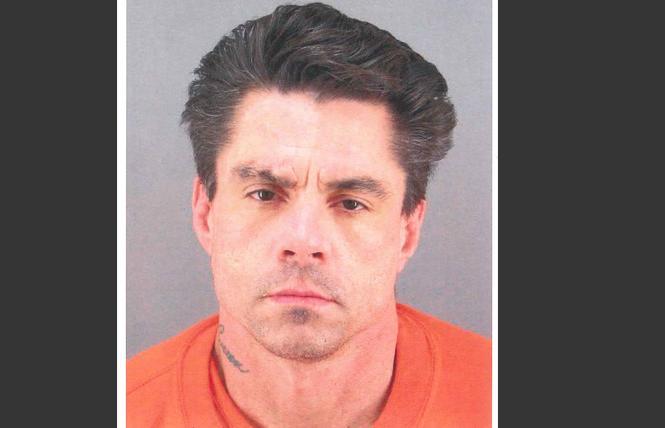 A jury has found James Rickleffs guilty in the 2012 murder of a gay San Francisco hairstylist. Photo: Courtesy SFPD

A San Francisco jury has found defendant James Rickleffs guilty of first-degree murder in the death of gay hairstylist Steven "Eriq" Escalon, whom he had met at a gay bar in the city's Castro district in June 2012.

Police had arrested Rickleffs the day after Escalon was found unresponsive for an unrelated incident. He was in possession of a suitcase filled with items from Escalon's apartment including a laptop, Escalon's checkbook, and a bankcard of one of Escalon's roommates. Escalon, 28, was found dead in the Diamond Heights apartment that he shared with two other roommates on June 12, 2012 after allegedly meeting and bringing home Rickleffs the night before.

Escalon's hands and feet had been bound, a cloth gag was in his mouth, and he'd been wrapped in a blanket. A responding police officer tried to resuscitate Escalon shortly after 6 p.m., but he was soon declared dead.

"Eriq got justice. Eriq got justice that's for sure," Escalon's mother, Esmeralda Escalon, told the Bay Area Reporter outside the courtroom after the verdict was announced.

Prosecuting Assistant District Attorney Julia Cervantes argued throughout the trial that Escalon and Rickleffs met at the bar, 440 Castro, the night before Escalon's death. The next morning, she said, Rickleffs tied Escalon up, gagged him, and poured poppers on his face immobilizing him with the intent to steal from him.

The medical examiner concluded that Escalon died of an overdose of a mixture of amyl nitrates, commonly known as poppers, and gamma-hydroxybutyric acid, or GHB. It was noted in the medical examiner's report that the twisted piece of cloth used to gag Escalon "smelled strongly of apparent amyl nitrate."

Rickleffs has been in custody since September 2012.

In a group discussion with Cervantes and Solis outside the courtroom after the verdict, the jury explained their reasoning behind their decision. Most said that they felt Escalon's death was caused by many factors, including the obstruction of his breathing from the gag, his inability to move from being bound, and the drugs found in his system.

They did say, however, that although they unanimously agreed that Rickleffs did not intend to kill Escalon, it was his doing of the robbery and disregard for human life that swayed them to find him guilty of felony murder.

"We didn't agree on one causation of death; it was a combination of factors," one male juror said.

Another male juror said, "[Rickleffs'] actions were a significant component in [Escalon's] death."

A female juror added, "He walked out the door and left him to die. That was a substantial factor in his death."

The Bay Area Reporter will be updating this story.