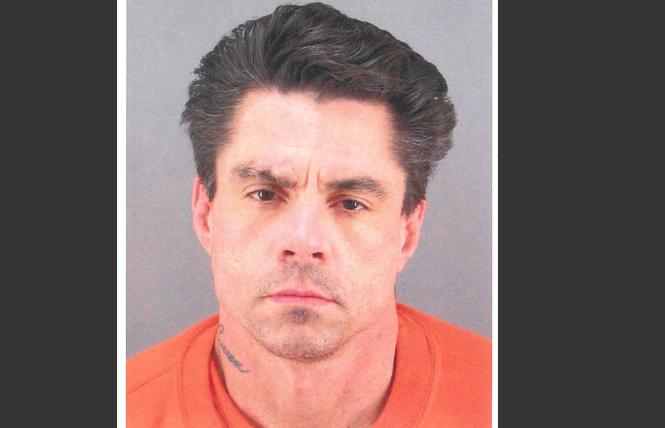 In what prosecutors are calling a confession, James Rickleffs admitted to tying up Steven "Eriq" Escalon, stealing items from his home, and leaving him bound and gagged in a two and a half hour video interrogation shown to the jury this week during his trial.

Rickleffs was charged with murder and first-degree residential burglary in 2012 in connection with Escalon's death. Escalon, a 28-year-old gay man, was found dead in his apartment that he shared with two other roommates on June 12, 2012 after allegedly meeting and bringing home Rickleffs, 52, the night before. Escalon's hands and feet had been bound, a cloth gag was in his mouth, and he'd been wrapped in a blanket. A responding police officer tried to resuscitate Escalon shortly after 6 p.m., but he was soon declared dead.

Rickleffs, who has pleaded not guilty to the charges, has been in custody since September 2012 and is being represented by Deputy Public Defender Niki Solis. The case is being heard by San Francisco Superior Court Judge Gerardo Sandoval.

The prosecution's last witness called by Assistant District Attorney Julia Cervantes this week was the lead investigator in the case, Sergeant Scott Warnke with the San Francisco Police Department. A video was played in court that showed a couple of hours of an almost seven-hour interrogation of Rickleffs by two detectives in August 2012.

Police considered Rickleffs a person of interest in the case when he was arrested the day after Escalon's death for an unrelated incident and found with a suitcase filled with items from Escalon's apartment including a laptop, Escalon's checkbook, and a bankcard of one of Escalon's roommates, according to police.

The video began with police asking Rickleffs if he ever visits the bars in the Castro and if he's ever been to Diamond Heights, where Escalon's apartment is located. Rickleffs denied knowing where Diamond Heights was and said the Castro was "not for me. No offense." Warnke began asking if Rickleffs knew Escalon or his two roommates. Rickleffs replied, "I think you have the wrong guy."

"I think there is something about that incident you don't know," Warnke told Rickleffs in the video. "Eriq died. He's dead."

"I don't hate anybody. I am friends with all kinds of people," Rickleffs continued. "I didn't mean to harm anybody."

"He had some weird requests," Rickleffs said. "He wanted to get tied up. I've heard of that before and stuff."

Prior to tying up Escalon, Rickleffs mentioned that he went to put his pants back on and realized Escalon had taken back the money that was given to him to take the naked pictures. This was a point Rickleffs mentioned several times in the video, seeming to be offended by it.

"He took the money back. He's rich, I couldn't believe it," he said.

The defendant admitted that he used zip ties to tie up Escalon, which he said he found in Escalon's room. Rickleffs first tied Escalon's feet then his hands.

"He said make it rough. Stop being such a nice guy," Rickleffs said of what Escalon kept telling him that night. At one point in the video, Rickleffs said, "I'm fucked."
Rickleffs also talked about using drugs that night.

"He liked that breathing stuff. He wanted to be gagged with it," Rickleffs said of Escalon, further explaining that with both hands and feet tied and a gag in his mouth, Escalon allegedly tipped over a bottle of amyl nitrate on a table, then dragged his face through the liquid, Rickleffs said, adding that he told Escalon to "slow down."

One of the detectives responded to this saying, "Did you pour it on him? This makes more sense to me."

Earlier in the trial, prosecutors said that the cab driver's testimony described how it was Rickleffs who wanted to stop for drugs and Escalon did not want to, but eventually gave in to the request after Rickleffs refused to stay the night with Escalon unless he got drugs.

"The second is the way he was discovered," the detective said. "He was completely immobilized. His torso and arms were wrapped."

The detective also asked how Escalon could have knocked over the bottle and wiped his face in the liquid when his hands were tied in the back.

The investigators asked if Escalon was still alive when Rickleffs left the apartment. He replied, "I talked to him the whole time. I could hear him." Police refuted this saying, "He was gagged." Rickleffs corrected himself, saying he could only hear him breathing.

Rickleffs also admitted to selling the TV and Escalon's iPhone he stole from the apartment and described a mini tool kit found in the suitcase as "burglary tools."

At one point in the video Rickleffs began crying, saying, "I never wanted anything like that to happen, it was all just a game." At the end of the video, as the detectives were walking Rickleffs out, Rickleffs again mentioned that he couldn't believe Escalon would take his money back that was given to him in exchange for the naked pictures.

San Francisco's chief toxicologist, Luke Rodda, Ph.D., who works in the city's medical examiner's office, also took the stand last week. From his testimony it was revealed that Escalon's blood tested positive for GHB and amyl nitrate and that THC was found in his urine. There was no alcohol found in his blood at the time of his autopsy.

Public defender Solis tried to argue that certain substances are known to have different levels of concentration before and after death. Rodda did confirm this, saying that there are known cases in which GHB concentrations have increased and decreased after a person has died, adding however, "GHB does not have a significant amount of degradation 24 to 48 hours after death," which is the timeframe of Escalon's autopsy.

The defense is expected to begin calling witnesses February 13.