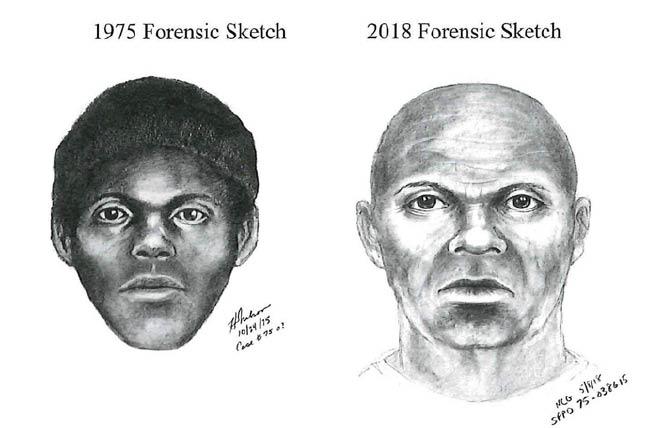 The original sketch of the "Doodler" suspect, left, was updated last year using age progression to show what the man might look like today, right. Illustration: Courtesy SFPD

San Francisco Police officials on Wednesday offered a $100,000 reward for information leading to the arrest and conviction of a man suspected of killing more than a dozen gay men in the city back in the 1970s.

According to SFPD Inspector Dan Cunningham, the lead investigator in the case, 16 gay men were killed in San Francisco over an 18-month period.

In addition to the reward, police released an updated sketch of what the suspect might look like as of 2018.

"In the 1970s we know this was gripping the gay community in San Francisco so inspector [Dan] Cunningham reopened all cases that were involved at that time to see if we could identify who that is so we could get closure for the victims and hopefully make an arrest in this case," Commander Greg McEachern with the SFPD investigations bureau said at a February 6 news conference at police headquarters.

The Doodler is one of San Francisco's most infamous cold cases. Initially, detectives believed that the suspect was responsible for killing at least five people and as many as 14 between January 1974 and September 1975. He would target gay men in the Castro district and other places, luring them into sexual encounters then murdering them and leaving their bodies in parks and beaches around the city.

At the news conference, McEachern asked the public for more information to help identify an East Bay psychiatrist with the last name of Priest whose is believed to have worked with the Doodler in the 1970s.

A 911 recording from 1974 was also played at the news conference of a man who reported a dead body near Ocean Beach. The man declined to give his name. SFPD is asking for anyone with information about this 911 caller. McEachern said this person could be a possible suspect or a witness with more information.

"I was walking along there and I thought I saw somebody lying there, but I didn't want to get too close to him because you never know what could happen ... OK," said the 911 caller in the recording.

McEachern said the investigative team is focusing on five homicides that occurred between January 1974 and June 1975. They are believed to be done by the same suspect because they had "similar injuries including stab wounds to the upper chest and back and a similar weapon was used in that a knife was used in those homicides and that all of the men that were victims were gay white men," McEachern said at the news conference.
Those homicides are believed to be connected to two assaults that occurred at the Fox Plaza Apartments July 1975 of two gay white men who survived and are working with police. These men provided similar descriptions of their attacker and both had said they had seen him drawing characters prior to the attack, leading the suspect to get the nickname the "Doodler."

As well, McEachern said the investigations team is currently awaiting results of DNA testing from a few of the homicides. He did not give a timeframe as to when the results would be in.

"The interest in this case now is no different for all our cold cases," McEachern said. "We take a look at cases we believe are solvable and cases that the victims never had justice in."