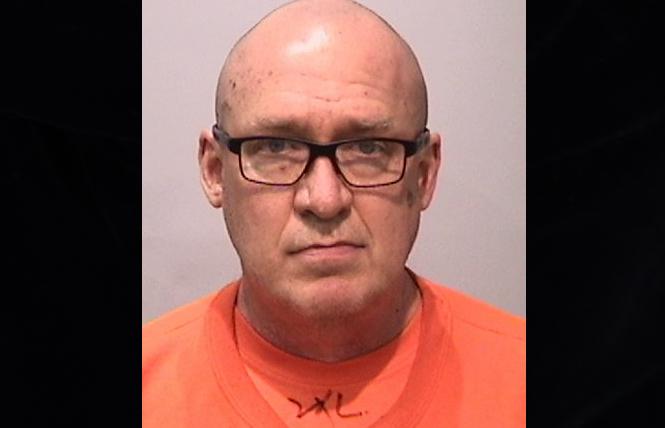 A gay San Francisco pastor, who has historically fought for gay rights in the Lutheran Church, was arrested on charges of possession of child pornography, according to the San Francisco Police Department.

Sabin, 59, was arraigned November 21 and pleaded not guilty to one count of distribution of child pornography and two counts of possession or control of child pornography, according to a spokesman for the San Francisco District Attorney's office. Private defense attorney Art Lipton is representing Sabin. Lipton did not respond to a request for comment from the Bay Area Reporter.

According to an SFPD news release, the department's Internet Crimes Against Children Unit began investigating Sabin in the fall after he was found to have been distributing child pornography through an online social media application. On November 15, the police searched Sabin's home on the 1300 block of Market Street.

"Investigators located a cellphone belonging to Sabin, which contained hundreds of child pornography videos and images depicting juvenile minors being sexually abused. During a subsequent search, investigators found that Sabin was storing child pornography on a cloud storage application," read the news release.

The pastor was released on his own recognizance November 16, according to court documents. "There is not sufficient probable cause to detain the defendant," court records stated.

A pre-trial date is set for December 19.

The day after Sabin was arrested, Christ Church Lutheran posted a comment on its website. "We have learned of the arrest of Steve Sabin, who will no longer serve as pastor of Christ Church Lutheran," the statement read. "We are concerned for, and ask for, prayers for all affected, including all victims of sexual misconduct and for the people of the congregation of Christ Church. We will cooperate fully with law enforcement. We have zero tolerance for clergy sexual misconduct and are committed to providing safe spaces for all children and youth in our church."

Sabin is known in the LGBT community for making headlines in 1998 after being kicked out of the Evangelical Lutheran Church in America for being gay. He later became pastor of the Sunset district church in 2001.

As previously reported by the B.A.R. in a 2005 article that reported on the continuation of anti-gay policies in the Evangelical Lutheran Church in America, Sabin was said to have "received a condemnation, trial, defrocking, and deletion from the official roster that gives pastors a pension fund and assembly vote."

After being booted, in the article, Sabin expressed his disappointment in the results of a four-year task force report that maintained the church's policy against same-sex blessing ceremonies and non-celibate LGBT pastors, along with other LGBT Lutheran pastors. The church released ambiguous guidance policies referring how to discipline LGBT clergy in relationships and their congregation, which urged bishops to use "pastoral discretion" over such matters, he said.

Sabin was also featured in documentarian Pam Walton's film that told the story of three religious leaders who experienced rejection after announcing their sexual orientation to the church. The 1999 article in the B.A.R. said Sabin had been, "outed by his bishop, supported by his congregation, and 'tried' by the national church ELCA (the Evangelical Lutheran Church of America) because he refused to resign."

As previously reported by the Bay Area Reporter, Sabin, along with other LGBT pastors, were reinstated and received as full-fledged pastors in the church at a ceremony July 2010 at St. Mark's Lutheran Church in San Francisco.

Today, church programs across the country include summer camps and homeless shelters for LGBT youth. Additionally, both sexual orientation and gender identity have been included in the churches "Human Sexuality: Gift and Trust" social statement. Social statements set policy for the ELCA and guide its advocacy and work as a public church.

On marriage equality, the Church Assembly has not come to agreement, but a policy has been established that gives autonomy to individual ministers and their congregations, allowing them to celebrate same-sex marriage if they choose.

The SFPD is asking anyone who may have had suspicious contact with the suspect to contact the SFPD Tip Line at 415-575-4444 or Text a Tip to TIP411.

Updated, 12/12/18: This article was updated to include current information about the Lutheran Church and gay pastors.