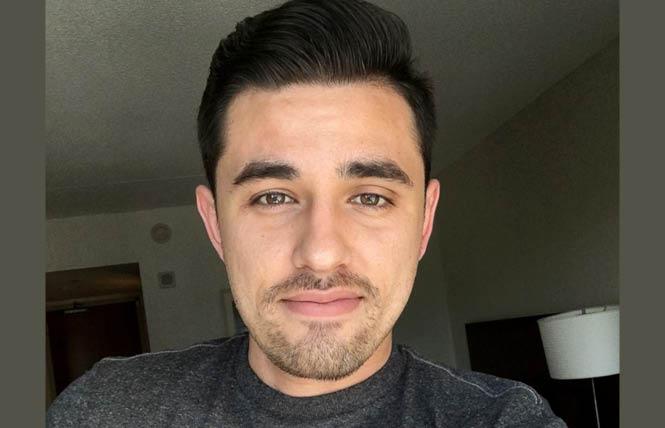 A promising doctoral clinical psychology student at Northwestern University was killed over the deadly Labor Day weekend in Chicago, just hours after his arrival in the Windy City.

Mr. Colombo moved to New York, where he worked as a researcher at Columbia University's Social Cognitive and Affective Neuroscience Lab for the past two years.

He was just hours into starting the next chapter of his life with his fiancé, Vincent Perez, in Chicago. The couple, who had a long-distance relationship for the past two years, recently bought a condominium near Northwestern, where Mr. Colombo received a full scholarship and was about to start his doctorate psychology program.

Mr. Colombo was only in Chicago for four hours after visiting his family in southern California before tragedy struck.

He was out running errands, getting clothes hangers and exploring his new neighborhood, texting photos back to Perez at home, when he was walking down the 7600 block of North Clark Street in the Rogers Park neighborhood September 2.

Then the texts suddenly stopped coming. Perez, who had asked Mr. Colombo to stay home and rest that evening after his travels, became worried.

"I got worried because he wasn't responding to my texts," Perez told reporters during a news conference Tuesday, September 4.

Perez checked Mr. Colombo's location on his phone and saw that he was at the hospital.

"I called, and they told me he had just passed. So, I didn't get to say goodbye to him," Perez, said, breaking into tears and calling Colombo "the love of my life."

At about 8:25 p.m. Mr. Colombo got caught in the crossfire of two people who started shooting at each other, authorities said. Mr. Colombo was shot once in the abdomen. He was rushed to Presence Saint Francis Hospital in Evanston, Illinois. Mr. Colombo was pronounced dead shortly after 9 p.m. local time, Chicago police told reporters at the news conference.

Mr. Colombo's mother said she was worried about dropping her son off at the airport that morning.

"I was very concerned about him coming out here, and he was killed within four hours of being in the city, four hours of stepping off that plane," Mr. Colombo's mother, Tonya Nishimuta-Colombo, told ABC News.

"I kissed him goodbye, and that was the last time I saw him alive," she said of her son who survived cancer when he was 15 years old and put himself through school.

Mr. Colombo was one of six people who were shot to death over the holiday weekend, police said.

A total of 28 people were wounded in shootings across Chicago over the Labor Day Weekend, reported ABC 7 Chicago.

Chicago's Area North detectives are conducting a homicide investigation. Police released photos of three suspects caught on video running through a Bank of America parking lot less than a block from the scene of the shooting soon after the incident late Sunday night.

No arrests have been made.

Perez, Nishimuta-Colombo, and Tracy Nishimuta, his aunt, are currently in Chicago arranging to bring Mr. Colombo back to California.

Fiancé devastated
Perez, 28, and Mr. Colombo met at SFSU during their undergraduate studies in 2013.

The couple, who were both from southern California, stayed together as Mr. Colombo pursued his goals, while Perez stayed in San Francisco working in tech, and studying abroad in Wales, as well as in New York.

They shared a love of dance. Their first date was to a dance class. Mr. Colombo also minored in dance, Perez said, still in awe of his late fiancé.

"Shane was amazing. Shane was the most beautiful person," Perez told the Bay Area Reporter during a phone interview September 6. "He loved San Francisco. He fell in love with the food, the people, the nightlife, [and] the music. That's where we fell in love."

He's appreciated the love and support that has come from San Francisco's academic and dance communities and their friends in the city, he said.

"He is the love of my life and he will continue to be for the rest of mine," Perez added.

Through the pain and remembering Mr. Colombo's desire to help people, Perez's only wish is that Chicago has resources to tackle social issues and violence.

"I know if there were more resources for them, these boys could do good," he said. "I wish the resources would be made more available to them, and I know Shane would be the one helping them ... he just wanted to help people."

"People are just trying to memorialize him and give this legacy which is amazing," said Perez.

In earlier interviews, Mr. Colombo's mother lashed out at Chicago, saying she hated the city, but Perez told the B.A.R. that she regrets her statement.

"It's not that she hates Chicago, she just hates the fact that this happened to him in Chicago," said Perez.

Beloved and respected
"He was so passionate about what he was doing," Nishimuta-Colombo said. "He was going to be a doctor. He wanted to do clinical research. He wanted to give people answers."

The academic community expressed its condolences to Mr. Colombo's family and sadness for the loss of a colleague.

Mr. Colombo's death is hitting faculty and students at SFSU "pretty hard," said Katrina Echon, a 52-year-old queer woman who is the GradStop coordinator at the Division of Graduate Studies

Echon hired Mr. Colombo while he attended the college and became friends with him.

"I've lost some friends before but this one hit pretty hard because he was so young and had a lot going for him," Echon told the B.A.R.

"We are all pretty devastated," she said about Mr. Colombo, who inspired her and his fellow students with his intelligence and work ethic. "It's been a really hard week for all of us."

Personally, Echon said she will miss his laugh and energy recalling their love of music and dancing. The two had gone to Outside Lands, a music concert in Golden Gate Park, just last month.

"He has a very distinct laugh that I will miss," she said.

"Our hearts and minds are with Shane's loved ones during this difficult time," wrote Teresa K. Woodruff, dean of the graduate school at Northwestern, and Adrian Randolph, dean of the university's Weinberg College of Arts and Sciences, in a joint statement.

The academic heads expressed sadness that the incident occurred in their "vibrant and caring community shared by fellow members of Northwestern," they wrote.

"It also saddens us that the world will not one day be able to benefit from the research Shane was about to pursue," they wrote.

The academics' feelings were shared with fellow researchers and students who expressed their condolences on the family's GoFundMe page.

Lauren Ellman, principal investigator at the Ellman Lab at Temple University, one of the programs Mr. Colombo applied for before joining her Northwestern colleague Vijay Mittal's program, called him an "exceptional person."

"I was amazed by his ability to overcome hardships and turn his experiences into future goals to help those who were suffering. I, and my whole lab, were incredibly impressed by him," she wrote.

"We felt so lucky to have Shane coming to join us at Northwestern," Mittal wrote, praising Mr. Colombo and his focus on "helping youth at risk for serious mental illness - the types of people who need care and understanding the most but are often overlooked."

"I can't help but think of all he could have done to advance science and to provide compassionate care to those who need it most. I will never forget him," she wrote.

Outpouring of support
There has been an outpouring of condolences and support to Mr. Colombo's family for funeral services and other expenses. The academic community and friends have raised more than $21,400 surpassing the $20,000 goal on Go Fund Me as of Wednesday evening.

The funds don't include the more than $7,000 raised by colleagues at the Columbia University's Social Cognitive and Affective Neuroscience Lab on a separate GoFundMe page for Mr. Colombo.

Mr. Colombo's family is planning memorial services sometime next week in Menifee, California, according to the GoFundMe page.

Updated 9/6/18:This article was updated to include comments from SFSU colleagues.

Updated 9/6/18: This article was updated to include comments from Vincent Perez.