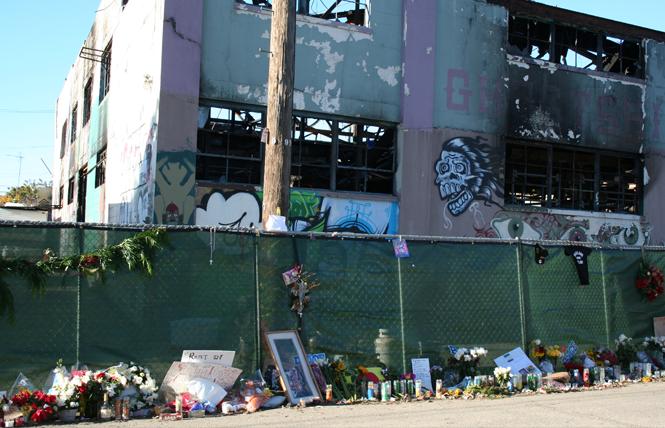 Flowers, candles, and signs line the exterior of the burned out Ghost Ship warehouse a couple of weeks after the 2016 fire that killed 36 people. Photo: Michael Nugent

In early July, Almena, 48, and Harris, 28, reached a joint plea agreement that sentenced them to nine and six years, respectively, in county jail for their part in the December 2, 2016 warehouse fire in Oakland that killed 36 people, including three trans victims. With good behavior and credit for time served, the pair could have served half that time.

Alameda County Superior Court Judge James Cramer came to his decision after a two-day hearing last week, where families intensely criticized the plea deal as being too lenient; some called it a "slap on the wrist." [See related story for an interview with Almena.]

The mothers, fathers, and siblings of the victims expressed their anger at the negligence, greed, and lack of remorse shown by Almena and Harris, who had both pleaded no contest as part of the agreement. They also called out the "apathy" and "incompetence" of the city of Oakland and its various departments for not taking action in response to the multiple calls received about the noise, trash, and illegal happenings at the warehouse.

He described the night of the fire and how he and his wife got in their car and headed toward the Ghost Ship after getting word their daughter was at the dance party that night.

"We had no idea what to expect and assumed it must be some exaggeration and we could get there and all would be fine," he said. "As we crossed the bridge we saw the smoke billowing and that's when we smelled it, the acrid smoke."

He described their daughter as a beautiful, charismatic, and magnetic person who people flocked to.

"Cash was right on the precipice of coming into her greatness as an adult woman. All of that potential, all of that shimmering potential was snuffed out in that warehouse on December 2."

Askew was a musician in the Bay Area pop-duo Them are Us Too, and was taught to play the guitar by her stepfather, who was the former manager of the Lexington Club, a now-closed lesbian bar in the Mission district, according to the Washington Post.

Feral Pines' mom, Nancy Fritz, was not present, but wrote a statement that was read by her attorney, Mary Alexander, at the August 9 hearing. Fritz was more outspoken about her anger toward Almena and Harris and blamed them for the fire.

Almena had previously rented the warehouse and illegally converted it into an entertainment venue and residence for about 25 people, some of who died in the fire. Harris helped collect rent and schedule concerts. Each man was charged with one count of involuntary manslaughter for each person who died in the fire.

The cause of the fire was not determined.

In her statement, Fritz criticized Almena for not installing sprinklers or receiving the proper permits for running a residential space, and not having fire extinguishers or ensuring the exits were accessible that night.

"Were you ever motivated by anything beyond expediency and profit," Fritz's statement read. "Your sentences are unbelievably generous for the damage you have done and the unnecessary tragedy you are responsible for."

Speaking on behalf of the other parents of the Ghost Ship fire victims, Fritz said, "The rest of our lives we must go on with the excruciating, heartbreaking fact that our children are gone, and life will never be the same."

Pines was a bassist, artist, and poet who lived in Berkeley.

Bohlka's wife, Natalie Jahanbani, who is also being represented by Alexander, did not speak. Bohlka held a master's degree in literature, rhetoric, and composition from Cal Poly Pomona and was a published poet, according to KQED.

Other families
Many of the other family members talked about how their lives will never be the same, the incredible loss they feel on a daily basis, and the anger they still have toward the defendants and the city of Oakland.

As well, their frustration that the city has not yet created a permanent memorial dedicated to the victims, though it held a ceremony outside the ruins of the warehouse on the one-year anniversary of the fire.

Oakland City Councilman Noel Gallo, whose district includes the Ghost Ship, said there are legal reasons preventing the city from creating a permanent memorial at the site.

"We are just waiting for permission," Gallo told the Bay Area Reporter. "We need to wait until the civil and criminal lawsuits are handled."

Another ceremony is scheduled for November 4, Gallo said, near Fruitvale Village in Oakland.

Colleen Dolan, mother of 33-year-old Chelsea Faith Dolan, who died in the fire, spoke the day before Cramer threw out the plea agreement and expressed her frustration over not being able to have the satisfaction of a trial.

"I used to be a nice person," she explained. "I taught my two daughters to be nice people, but the incompetence and apathy surrounding the Ghost Ship fire and this convenient cover-up of a plea bargain has changed me."

She continued, "This plea bargain has nothing to do with sparing the families. What bullshit," she said. "We deserve the investigation that would have come from a trial."

The Alameda County District Attorney's office declined comment for this story. However, on Thursday District Attorney Nancy O'Malley sent a letter to the court stating that her office would "not be entering into anymore settlement discussions with defense counsel prior to trial." The letter was first received by the East Bay Times.

Updated, 8/16/18: This story was updated to include new information from the district attorney's office.