Hate crimes against LGBTs on the rise in SF, CA 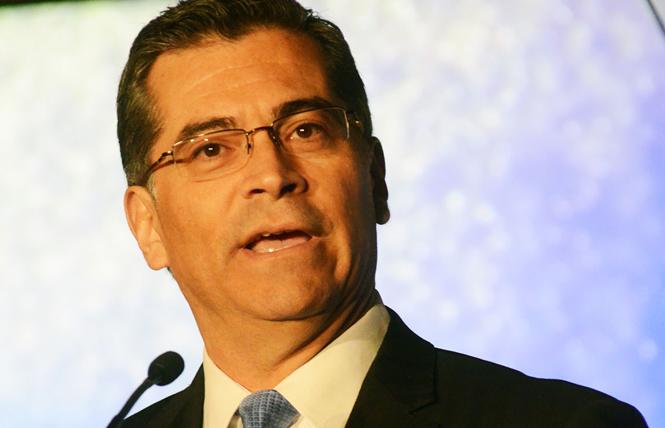 Hate crimes in San Francisco and California are on the rise for the third year in a row, according to annual reports released by state Attorney General Xavier Becerra. The reports show that hate crime incidents in San Francisco rose by 30.5 percent and increased by 17.4 percent in the state.

The statistics alarmed many local and statewide LGBT officials, some of whom blame the exclusionary, anti-immigration and anti-minority rhetoric coming from President Donald Trump and his administration.

In San Francisco, Sneh Rao, a gay man who's director of policy for the San Francisco Human Rights Commission, talked to the Bay Area Reporter about how the White House's rhetoric is impacting communities across the nation.

Equality California, the state's largest LGBT rights group, reminded supporters that the fight for equality is far from over.

"With intolerance and hate on the rise across our country, these findings clearly illustrate how much work is left to be done right here in California," said EQCA Executive Director Rick Zbur in a news release. "These tragic statistics are just one piece of the story. Behind these numbers are parents and siblings and children, students and teachers, co-workers and neighbors - people who deserve to live safe and healthy lives with equal dignity and respect. We owe it to them to continue doing everything we can to end the epidemic of hate and violence in our state and in our nation."

Just days after the July 9 release of Becerra's report, Senator Kamala Harris (D-California) joined Democratic lawmakers in the Senate and House to introduce the Gay and Trans Panic Defense Prohibition of 2018. The legislative ban would mitigate the use of so-called gay and trans panic defenses, in which defendants attempt to blame a victim's sexual orientation or gender identity for their violent, sometimes deadly, reaction.

"There is no place for prejudice against people who are lesbian, gay, bisexual, or transgender in our country," said Harris in a news release. "The so-called gay and trans panic defense allows people carry out hate crimes and denies justice to the victims of those crimes."

Lesbian Senator Tammy Baldwin (D-Wisconsin) and gay Representative David Cicilline (D-Rhode Island) are among the co-sponsors of the bill, which was introduced July 13.

Harris, who was state attorney general before her election to the Senate, added, "I was proud to be part of the effort to outlaw it in California and am committed to banning it nationwide."

Recent attacks
In the Bay Area, recent reported attacks against members of the LGBT community are being investigated by police as possible hate crimes. Tim Tait, 40, whose drag name is Ginger Snap, was leaving the Eagle Tavern June 9 when he was allegedly attacked, leaving him with two black eyes, a gash on his forehead, a broken front tooth, and other cuts and bruises.

Tait could not recall any details of his attacker and filed a police report about a week and a half after the incident. Police had no new information on Tait's case.

Global LGBT rights activist Scott Long was brutally attacked and hospitalized June 9 in Oakland. Long was walking to a friends apartment when a man came out from behind a fence in a neighboring driveway and attacked him from behind with what Long believes was a tire iron in the East Bay city's Laurel neighborhood.

Though Becerra stated how important data is to creating "smart policies that ensure public safety throughout our state," he neglected to mention that the majority of hate crime incidents go unreported, according to a recent report released by the United States Department of Justice.

In California, a state audit released in May revealed that outdated policies have led law enforcement agencies to misidentify or fail to report incidents.

"Although reported hate crimes have increased by more than 20 percent from 2014 to 2016, law enforcement has not been doing enough to identify, report, and respond to these crimes," Auditor Elaine Howle wrote in a letter accompanying the audit.

Some efforts are being made to combat this, however. Last month Governor Jerry Brown signed Assembly Bill 1985 that sets minimum standards for hate crime policies adopted by local law enforcement agencies and will improve hate crime reporting across the state. The bill is authored by Assemblyman Phil Ting (D-San Francisco) and co-sponsored by Equality California.

Becerra also led a coalition of 10 attorneys general to submit a comment letter to the U.S. Justice Department opposing a proposal that would end the collection of data related to violence against LGBTQ youth.

Other crime statistics
According to Becerra's report, the homicide rate in California decreased by 6.5 percent per 100,000 population, while arson and rape rates increased 10.7 and 6.9 percent, respectively. Violent crime in general rose 1.5 percent.

The San Francisco Police Department also released its own 2017 crime date report for the city, which showed that the homicide rate decreased by 3.4 percent, homicide by firearms decreased by 5 percent, and non-fatal shooting incidents decreased 15.8 percent.

"Reducing violent crime is and will always be our top priority," said San Francisco Police Chief William Scott in a news release. "We're working closely with community members and our city partners to reduce gun related violence. Protecting lives and providing safety for the public - particularly our youth - is key to ensuring a vibrant future for everyone."