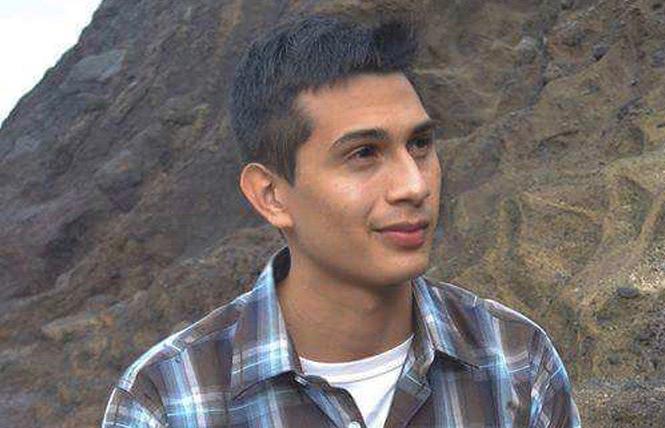 The last text message sent by a young, gay man traveling on an Amtrak train before ending up in a coma, was to his great-grandmother that he found a new friend and was going to go exploring with them.

Aaron Salazar, a 22-year-old Latino student at Portland State University, is in the intensive care unit at Renown Regional Medical Center in Reno, Nevada after traveling on Amtrak from Denver to Portland, with a layover in Truckee near Lake Tahoe.

His family is calling the incident an attack and a hate crime while the Amtrak Police Department, which is leading the investigation, is claiming, "there is nothing to suggest criminal intent." Detectives from the department are also "trying to push the narrative" that Salazar jumped from the train, said Aaron Salazar's cousin Austin Sailas, an allegation the family is fiercely disputing.

[Updated 5/24/18: Truckee Police Chief Rob Leftwich responded to media attention on the case Thursday, writing on the department's Facebook page that Aaron Salazar did not get off the train in Truckee.

Leftwich stated that the "incident originated and appeared to be entirely contained on the Amtrak train."

"On May 15, 2018, at approximately 11:30 a.m., the Truckee Police Department responded to a call regarding a person lying near the railroad tracks at the far east end of Truckee," Leftwich wrote. "When officers arrived, they located a person with significant injuries laying only feet from the railroad tracks. That person was quickly identified as Aaron. Officers assisted with medical aid, and Aaron was transported to Renown Medical Center in Reno, NV.

"It was almost immediately discovered that Aaron was a ticketed passenger on the westbound Amtrak train that had passed through Truckee earlier that morning," Leftwich wrote. "Because the incident originated and appeared to be entirely contained on the Amtrak train, the Truckee Police Department turned over the investigation after our preliminary response. Aaron never disembarked in Truckee, as he never made it to the Truckee station, and there is no information to suggest Aaron had any connection to Truckee or interactions with anyone from Truckee."

Sailas said he believes Aaron Salazar got off the train in Truckee with this new person he met and was attacked at that time.

In the TPD statement, Leftwich said the department, has "no control over the release of substantive information in this incident, since another agency is handling the investigation." He acknowledged the frustration that comes with the withholding of information in a situation like this.

The statement also commented on the possibility of the crime being covered up by police.

"The Truckee Police Department will never allow a conspiracy or cover-up to occur regarding any incident or investigation," Leftwich wrote. "Any suggestions to the contrary reflect a lack of factual information or knowledge of our organization and community. The Truckee Police Department will also never allow a crime against the LGBTQIA community to go unaddressed or uninvestigated. A case where a hate crime was committed would be addressed to the fullest extent of our capabilities. The Truckee community is not in danger and never was. We did not release information out of professional courtesy to Amtrak and to protect the investigative process as well as the confidentiality of the Salazar family."]

Aaron Salazar was found May 15 in Truckee lying on the side of the railroad tracks beside the Union Pacific Railroad right-of-way property within the town's corporate limits by railroad workers shortly before noon, according to the Los Angeles Blade. He was ground transported by officials from the Truckee Fire Protection District to the Reno hospital.

His injuries include multiple brain injuries with an MRI showing damage to his brain stem, a broken pelvis, and severe burns near his groin and upper thighs. Sailas and Aaron Salazar's sister, Alyssa Salazar, said there were many signs of self-defense, including blood under Aaron Salazar's fingernails and marks on his left hand indicating defensive punches.

Yet, Amtrak did not check for DNA, according to Sailas, and is also withholding information and items from the family like Aaron Salazar's cellphone, laptop, where exactly he was found, and what time.

"Please give us the answers we want and need to allow us and Aaron to heal and to stop pushing this hurtful narrative that he tried to commit suicide," Sailas told the Bay Area Reporter Wednesday.

The burns on his groin are a sign to Sailas that the incident was a hate crime against Aaron Salazar for being an openly gay man.

It's been over a week since Aaron Salazar was found, and the family hasn't been given any new information. Amtrak police continue to give them the same response they gave the B.A.R., that no signs point to criminal intent and no further information is given.

"The Amtrak Police Department, in coordination with local authorities, is conducting an ongoing investigation into this incident and we are in contact with the family to provide them updates," Amtrak's statement said. "At this time, there is nothing to suggest criminal intent."

The location where Aaron Salazar was found falls within the federal jurisdiction of Amtrak, leaving the entirety of the investigation to the transportation company's in-house police department. The train ride had a layover in Truckee close to where Salazar was found, Truckee Police Department Detective-Sergeant Danny Renfrow told the Blade.

"I think whoever this friend was he met on the train, they got off the train in Truckee, went to explore and get food, and he attacked him," Sailas said.

Aaron Salazar still had his wallet with $286 and his cellphone on him at the time he was found, evidence the police department is using to support its theory that he jumped, the family said.

The family has set up a GoFundMe for Aaron Salazar's medical costs and is asking people to use to the hashtag #JusticeForAaron.

On Wednesday (May 23), Aaron Salazar opened his eyes for the first time and his cousin said doctors are hopeful.

"He was such a goofy, happy, loving kid at his heart," Sailas said. "He loved Lady Gaga. We used to sing Katy Perry and Lady Gaga together and dance. He would never get mad, he trusted everybody, he loved everybody, and was a self-proclaimed pacifist."

To donate to Aaron Salazar's medical costs, visit http://www.gofundme.com/bv5cn-justice-for-aaron. The B.A.R. reached out to Renfrow, but did not receive a response before this article was published.

Anyone with information is asked to contact the Amtrak Police Department at 800-331-0008.