Man pleads no contest to violating Castro stay away order 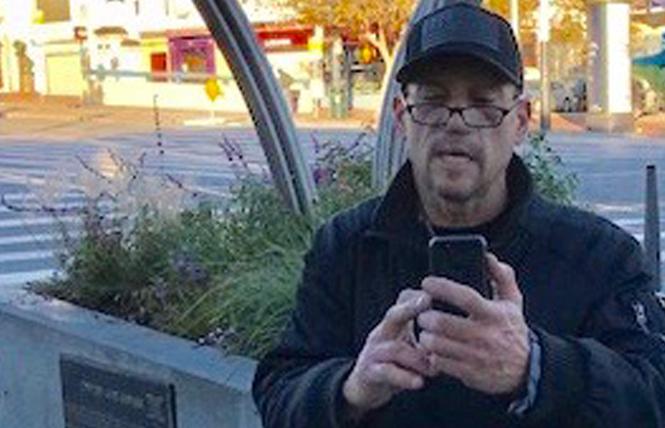 Juan Carlos Mesen can't seem to stay away from the Castro district. After being issued a temporary restraining order in December 2017 for allegedly assaulting a man in the Castro Theatre parking lot, Mesen has since been arrested twice for coming within 150 yards of 18th and Castro streets.

Greg Carey, chief of patrol for the neighborhood watch program Castro Community On Patrol, recalled the incident in December that led to Mesen's restraining order.

"When I came on the scene, I saw [the victim] lying on the ground with Juan Carlos on top of him," Carey said in a recent phone interview with the Bay Area Reporter.

Mesen, 53, was charged with felony assault. Then, on January 27, Mesen was arrested again in the Castro for threatening the public. In violation of his restraining order, Mesen was then issued a stay away order from the San Francisco District Attorney's office, according to Alex Bastian, deputy chief of staff for the SFDA's office, which is effective for three years.

Mesen again violated his stay away order and was arrested April 12 in the Castro.

According to Mesen's attorney, Deputy Public Defender Will Helvestine, Mesen pleaded no contest to a single misdemeanor stay away order violation stemming from his arrest last month. Helvestine said there are no pending charges against Mesen and, as part of his plea deal, all his cases have been resolved in what is known as a global resolution.

The stay away order is still active.

Helvestine did not provide a comment on behalf of Mesen.

CCOP has put out flyers asking people to call authorities if they spot Mesen in the neighborhood.

"He is very verbally assaultive and threatening," Carey said. "In the Castro, he often accosts people on the sidewalk in the neighborhood. He is very intimidating both verbally and physically."

Carey said he has received additional calls from the public about Mesen's threatening behavior, although not all calls resulted in an arrest. Mesen is also known to be aggressive while riding his red motorcycle in the area.

A motive for Mesen's actions is not known, and Carey said there is nothing that points to Mesen specifically targeting LGBT people. It is not known if the person Mesen assaulted in the Castro Theatre parking lot was LGBT.

The San Francisco Police Department did not respond to the B.A.R. for further information regarding Mesen.

Car break-ins
Although Mesen continues to be a concern to Castro community members, Carey said crime has been relatively low in the area. He said the weekends have been relatively quiet recently and he has seen a decrease in reports of incidents on the online community forum, Next Door.

"It's been nothing beyond minor incidents lately," Carey said. "There is a high level of pick-pocketing though. That's always common, nothing new."

CCOP was instrumental in getting security cameras installed in the Walgreens and Castro Theatre parking lots, which have been a deterrent for car breaks ins.

"Walgreens is one of our most prevalent lots for car breaks-ins," Carey said. "But when we patrolled this last weekend, we saw no fresh broken glass, and normally when we patrol these lots, we see one to three cars with broken windows."

The cameras are part of a citywide initiative called the Parking Access & Revenue Control System launched in May 2017. It is now collaborated on by the San Francisco Municipal Transportation Agency, Mayor Mark Farrell, Supervisors Aaron Peskin and Catherine Stefani, and San Francisco Police Chief William Scott. The program aims to make city-owned parking garages and lots safer with the use of cameras, lighting, signage, and fences.

MTA spokesman Paul Rose did not have data on the Castro district's cameras' effectiveness, but said the agency is working with SFPD to gather it.

He said there were about 31,000 car break-ins last year and said although conviction for these crimes is an "uphill battle," improvements are being made, thanks in part to the security cameras, whose footage can be used as evidence. Of the 31,000 car break-ins, only 550 cases or fewer, about 2 percent, resulted in an arrest, said Gascón.

"When I became DA, the conviction rate in our office was less than 50 percent for misdemeanors and 60 percent for felony convictions," Gascón said at the meeting, which was streamed live via Facebook. "Consistently in the last couple years, our conviction rate has been over 80 percent and last year almost 85 percent.

"I do believe we will see car and other burglaries and property crime go down and continue to go down every year," he added.