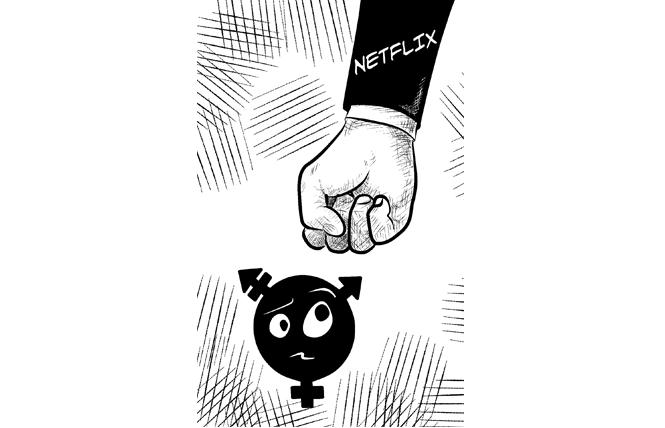 In February 2006, Dave Chappelle was interviewed by Oprah Whitney about walking off his eponymous Comedy Central sketch show. The moment for him was when — while doing a sketch in blackface as a "visual personification of the N-word" — someone on the set laughed in a way that Chappelle read as laughing at him, rather than with him. That made Chappelle reevaluate what he was doing, and if his comedy was sending the wrong message.

Yet there was one other comment Chappelle made during that interview that really caught my ear. In speaking about the way the entertainment industry disrespects Black entertainers, he said, "When I see that they put every Black man in the movies in a dress at some point in their career, I start connecting the dots."

Fifteen years later, and I don't think Chappelle is in any danger of donning a dress. His more recent comedy special, "The Closer," is on Netflix and Chappelle makes anti-trans animus a signature of his routine.

In the show, Chappelle wears his transphobia like a badge, as if being transphobic exempts him from general kindness. He declined a hug from a trans comedian after a comedy set where he claimed "this bitch bombed for 45 minutes, straight," and just after he promised to mentor her.

"She grabbed me real tight, hugged me, squeezed me. And I pushed her off violently, 'cause I'm transphobic. I said, 'Boundaries, bitch!'" he said.

I'm not going to spend many more words specifically on what Chappelle said this time about transgender people in "The Closer," any more than I want to rehash what he said in his previous special, "Sticks & Stones." I'll spoil nothing by noting that he spent a fair amount of time talking about cancel culture, and JK Rowling, and even proclaimed that he is a trans-exclusionary radical feminist, or TERF. It's all ugly and, at the same time, dreadfully boring.

Chappelle wants to say that transgender people are outraged by his words. I suppose that makes him feel somehow like the fresh-faced rule breaker he once was all those years ago.

I'm not outraged. I'm disappointed. I assumed he was better than this.

It seems remarkably easy, in a time when the conservative movement is busy trying to destroy trans rights in the same breath that they attack critical race theory, to make transgender jokes. It clearly pays very well to spend large chunks of a comedy monologue attacking some imaginary notion of a powerful transgender force canceling their enemies.

No, Chappelle will, surely, continue to be a brave storyteller fighting back against those terrible transgender cancel warriors who are trying to silence him. He's welcome to believe that all he wants. I know that plenty will speak out but, unlike his beliefs, we have precious little power in this discussion.

In the wake of the release of "The Closer," Terra Field — a trans Netflix employee — took to her Twitter account to speak out. She directly spoke to the problem with Chappelle's comments in his show. I am going to let her speak for a moment:

"This all gets brushed off as offense though — because if we're just 'too sensitive' then it is easy to ignore us."

Field and two other Netflix employees were suspended, supposedly for listening in on a meeting they weren't allowed to attend, even after having been given the link from a manager. They were later reinstated.

A day later another Netflix employee, a Black, trans employee who also happens to be pregnant, was fired. The official reason was that they released "commercially sensitive" information about "The Closer." It seems notable that the same employee was organizing a walkout over the Chappelle special and the way Netflix has handled fallout over it.

The sensitive information? That Netflix spent $24.1 million for Chappelle's show.

Meanwhile, Netflix co-CEO Ted Sarandos, apparently not having any concerns about his own employment status, had his own spin on the controversy, saying in an internal email on October 8 that, "we don't allow titles on Netflix that are designed to incite hate or violence, and we don't believe 'The Closer' crosses that line." A second memo from Sarandos elaborated, saying that "content on screen doesn't directly translate to real-world harm."

In the transgender community, death is an all-too-common occurrence. We have seen a record number of anti-transgender violent killings, and the vast majority of those victims — like every year — are Black trans women.

Unlike Sarandos, I know that that violence doesn't exist in a vacuum. It is the culture that amplifies the hatred, and that hatred leads to the violence we see. "The Closer" is, indeed, part of that culture.

Meanwhile, Chappelle still has nothing to worry about when it comes to him having to wear a dress, but I suggest he think strongly about why he quit "Chappelle's Show" and consider what that Chappelle might think of today's Chappelle.

It is as if Chappelle sold his soul to Netflix's Sarandos, and now it is the transphobes who are actually the ones laughing at him — not with him.

Gwen Smith has said all she hopes to say on this. You can find her at www.gwensmith.com