Transmissions: So be it 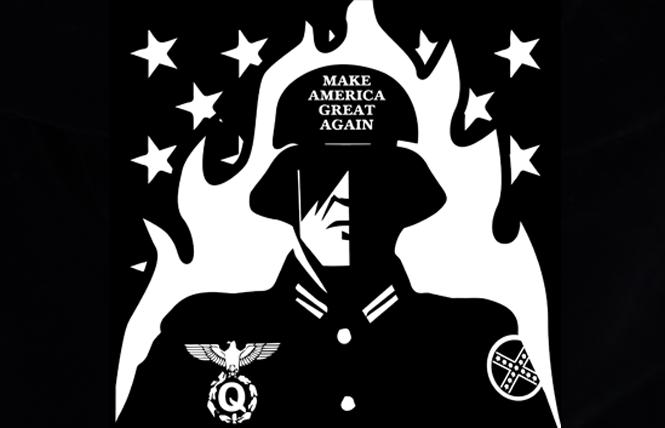 Around 2 p.m. Eastern Standard Time on January 6, a mob of pro-Trump forces, QAnon believers, Proud Boys, and others assaulted the United States Capitol, whipped up into a frenzy by weeks of propaganda and speeches by outgoing President Donald Trump and members of his staff and family.

When all was done, five people were dead and several others were injured. The mob had overtaken police and had nearly free rein of the building, as staff cowered behind barricaded doors. All indications are that the whole scene could have been so very much worse.

Hours before the siege, Donald Trump Jr. took to the stage at the "Stop The Steal" rally — the same place his father riled up the crowd who marched to the Capitol. Early in his speech, after thanking the crowd for "standing up to the bullshit" and "being in the fight with us," Trump Jr. sarcastically said "Amen and A-Woman," mocking the similar phrase used by Congressman Emanuel Cleaver (D-Missouri) during the first daily prayer of the 117th Congress two days prior.

Just for a point of order, I want to note that "Amen" is not a gendered word per se, but a Hebrew word that translates to English as "so be it."

Trump Jr. then segued into a transphobic rant, citing a recent study from the British Journal of Sports Medicine that states that transgender women have an athletic edge over non-transgender ones even after a year on appropriate hormone therapy. The advantages begin to fade after that point, and there appears to be no benefit after two years.

"That shows you the mentality of where the Democratic Party is," said Trump Jr. "They spent money on a study that came to the incredible conclusion yesterday that trans women playing female sports have a competitive advantage."

"No shit," he screamed. "Who could have seen that coming?"

Trans rights have been under constant attack during the Trump administration, so Trump Jr.'s words come as little surprise. It was his father who initially tweeted a ban of transgender military members in July 2017, and his father's administration that has sought to roll back trans and LGBTQ rights across the board. Fights against trans rights have been raging across the country too, from the loss of an equal rights ordinance in Houston and the doomed anti-trans House Bill 2 in North Carolina to dozens of anti-transgender bills sitting in statehouses right now, awaiting the start of the legislative year.

It's not to say that trans people are the only minority group under attack during this administration, or even the one treated the worst by same. We live in a time where women and minorities, sex workers and immigrants, have been stripped of rights or faced rollbacks of federal protections. Things have gone so far as to end up with young children being removed from their parents and being forced to live in cramped, unpleasant conditions in chain-link cages in the Arizona desert.

Nevertheless, we have served as a useful lightning rod for the conservative right, stinging from defeat over same-sex marriage becoming legal nationwide nearly six years ago. We have become an easy target for the right, whether it is attacks on drag queen storytimes or the aforementioned anger over transgender people in sports.

And so, in the afternoon on January 6, a mob whipped up by speeches against all of the usual enemies of the right wing, including transgender people, assaulted the United States Capitol. Inside, congressmembers, their aides, and others scrambled for safety as Capitol Police attempted to protect them.

Among those aides was at least one transgender person, whom I will not name for her own privacy. She was in the Capitol as rioters entered. One called her a "faggot cunt." She was punched twice in the tumult, leaving her bruised and hurt. Thankfully, that is largely the extent of her injuries.

Those who sought to overtake the Capitol act like they, alone, are American: that they are standing up to all these outside forces that are perverting the American way of life, and they are here to protect it.

Yet every trans woman who calls this country home is just as much an American, as are so many others who are disenfranchised by the outgoing administration. We have made this country ours as much as anyone — and deserve the same rights. That this is somehow inconvenient for the followers of a failed president is not my responsibility.

In the wake of the insurrection, many on the right have made disingenuous calls to seek healing and unity, putting the onus on the left once again, expecting us to set aside real hurt to reach out to people who would like to see people like me — and many others — dead. There's been no expectation that they need to temper their attitudes and actions from those expecting me to reach across some imagined aisle.

Around 2 p.m. Eastern Standard Time on January 6, things changed. This genie, let out to wreak havoc at the behest of Trump, is not so easily going back into the bottle. More may be hurt, and serious tumult may yet be our lot.

Gwen Smith had planned a much more hopeful column for this week. You can find her at www.gwensmith.com