Transmissions: She, her, hers 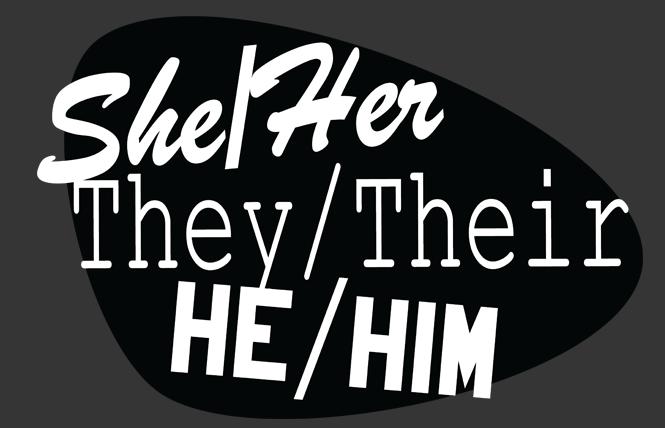 I find myself grappling with an unusual contradiction, one with which I find myself having somewhat unique challenges grasping for an answer that satisfies me.

Over the last few years, a movement has been afoot. Initially picked up by trans and nonbinary activists, non-trans allies took up the mantle and have begun to push to include their preferred pronouns in introductions, online biographies, email signatures, and more.

Some events provide stickers and buttons where one can easily declare that their pronouns are "she/her," "they/them," "zie/hir," "he/him," and so on.

The goal of all this is simple: by normalizing the practice of asking and/or declaring preferred pronouns for everyone, transgender and nonbinary people will not feel "othered" when they need to provide their pronouns, or when asked which ones they use.

This seems like a good thing to me. As a trans woman, I've been in plenty of awkward situations where I have been asked about my pronouns, or where I have had to assert my pronouns of choice: she/her/hers, for those who might be wondering. By having everyone declare their pronouns up front, we all have a level playing field from the get-go, and all end up being included in the process.

I lived a lie for many years, having to present in a gender that did not fit me. During all those years, a completely different set of pronouns was applied to me, and those pronouns stood for everything that was wrong with how I was seen in the world.

I transitioned some time ago. I am largely accepted within my gender, and all the years of sweat, and toil — not to mention medical bills — have essentially paid off. For the most part, everyone finally can see the person I always knew I was, without having to second-guess.

So, it feels awkward and uncomfortable when I find myself in a position where, after all these years, I still have to clarify my pronouns for people. I want to scream, "Isn't it obvious?" when I am confronted, as I was for decades, about what my pronouns are.

I have to remind myself, in those times, that those who are asking are well-meaning, and don't mean to cause pain. They may not know the years when such a question may have had a sharpened edge, wielded against me in challenge. The "wrong" answer then would open me to mockery and derision, and could be a source of pain.

In this way, it would provide the exact opposite of what is meant by asking. Rather than a tool of affirmation designed to prevent me from feeling othered, it singles me out with laser-like precision, revealing any self-perceived shortcoming. It becomes fuel for any lingering dysphoria I may hold onto.

It's hard to say.

This notion of asking for preferred pronouns, while it has caught on in a lot of places, is still new. It hasn't quite yet normalized the practice of providing one's pronouns no matter if one is trans or not.

One worry I have is that this is all a trend in some circles, a transgender flag-colored "ribbon magnet" where one can show they are a good ally without really doing anything of substance to help nonbinary and transgender people. Just another example of doing the literal least one can do to try and bring true acceptance of trans and nonbinary people to the world.

I am sure, too, that it's even less a part of culture outside of the relatively progressive circles I tend to run in. It may be a lot less common in parts of the country and world that still feel that men are from Mars and women from Venus, or whatnot.

In those places, I suspect that most non-trans men and women might be offended by such a question. They likely react negatively, as if you should be able to tell by their appearance, their name, and their actions exactly what their pronouns are.

In short, they — like me — might find themselves responding to any inquiry about their pronouns with the same frustration I would. They might exclaim just as vehemently that their gender should be just as obvious.

In short, this becomes all so very complicated — but that's OK.

If the goal is to normalize this development, then I, too, need to be part of that normalization process. I am not giving up any hard-won right to my gender by declaring my pronouns, no more than any non-transgender person is giving up anything of their own by declaring the same. We are simply giving voice to what is, to ourselves, obvious.

I don't know if declaring pronouns is ever going to be a routinely accepted thing. It may not even be something I'll see in my lifetime, given that people still fight over gender-neutral terms like "flight attendant," or cross swords over gender-specific dress codes. These are fights I've seen since the 1970s, and I'm sure date back, in one form or another, much, much further.

Is asking pronouns good? Is it bad?

I don't know. It might be both. It could even be neither. I simply do not have an answer I am fully happy with.

All I can say is this: it seems a worthwhile thing to explore. We can only learn by trying.

Gwen Smith has grown accustomed to her pronouns. You'll find her at www.gwensmith.com.