by Bradford Wolfe and Alex Grey 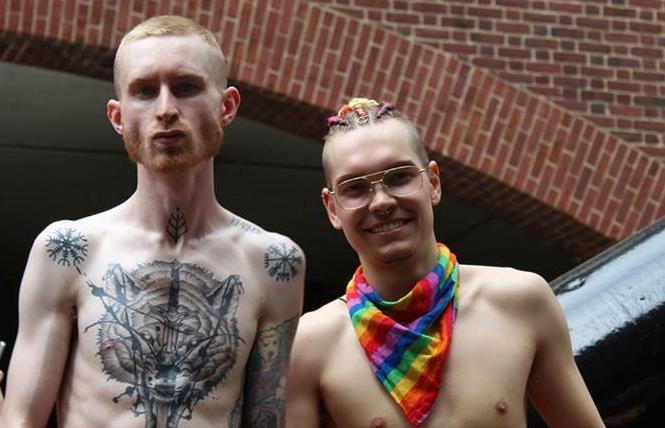 Bradford Wolfe, aka Tatttwink, left, and Alex Grey, aka Son of the Sea.

Among the thousands of talented performers across the world, are us, Tatttwink and Son of the Sea, who are known to family and friends as Bradford Wolfe and Alex Grey, respectively. Interestingly, we share much more than just a profession; we are actually in a relationship, a polyamorous relationship to be exact, with a third partner, who asked that his last name not be published. Between filming scenes and interacting with our loyal fan bases, we live as part of a happy, committed trio.

While we continue to live happily within our poly relationship, we also work in collaboration with Xtube, an internationally acclaimed LGBTQ adult entertainment site. Seemingly, we lead an incredibly busy and rich lifestyle. In our own words, we'll discuss how we're successfully following this polyamorous path to X-rated fame, building our own brands, living in harmony, and finally finding the family we've always wanted.

"I met Bruce, my husband, six years ago after finding him on Plenty of Fish when I was 19," said Wolfe. "Then, three years on, we decided that we wanted to open up our relationship; however, we didn't just want to do this sexually, we also sought an emotional connection. We met Alex on Grindr and what started off as friendly sex and making videos together quickly progressed; me and Bruce went on holiday together while Alex babysat our dogs and he never left, he moved straight in. When you know, you know. Three years later, we're still together and we're happier than ever.

"Sex is work for us, which is why an emotional connection means so much more," Bradford added. "We looked for something more personal than an open relationship. Many wouldn't think it but having a third party in our life and relationship has brought us so much and benefited us in ways we couldn't have imagined, it truly helps our dynamic."

For any married couple, the idea of adding an additional member to an already solidified relationship may seem a little daunting ... how would this work? Would someone feel a little 'left-out'? Grey, 21, and most recent addition to this trio, suggested otherwise and emphasized that the process was actually very natural and entirely positive.

"I looked at them as one unit, they left a lot up to me and always said that the ball was in my court. We wear similar obsidian black rings and they've done all they possibly can to make me feel like I'm an equal, which I do," Grey said. "The pie is very much split three ways. We have considered other options, such as getting my name on insurance papers, but we're very happy."

The two emphasized that their relationship is actually very similar to typical two-way relationships, with their advice simply being "give everyone enough attention and make sure you're having a great time, it's important to have fun!"

As an inevitable consequence of their career choice, Wolfe and Grey face regular criticism and are often unfairly stereotyped as overtly promiscuous. The two are passionate about speaking their truth and tackling this misconception. They said, "A majority of three-way relationships are in it for the companionship and sense of family. It's the family aspect that appeals to us most. If you wanted to be promiscuous, you'd just have an open relationship. Poly is more about the emotional side of it."

This is something that Wolfe and Grey's family recognize, as they remain entirely supportive of this three-way relationship and the pair's controversial careers. Wolfe said, "My family and friends are supportive. I think most of them were more surprised to learn that you could make a living off selling yourself online than what I was actually doing. My family's support throughout has definitely helped to keep me going long enough to be successful."

The third member of their trio is never left out; he joined the two in New York City and is extremely proud of their accomplishments. He does, however, wish to remain anonymous for he continues to work for the government. Evidently, no matter your preference or background, what is most important in any relationship is trust, respect and commitment.

Between filming, the trio spend time with their three dogs, one of which is a 130-pound Great Dane. Wolfe and Grey also love gaming and have big dreams for the future; they work continuously to build their personal brands, are always willing to try new things and remain thankful for their loyal fan bases.