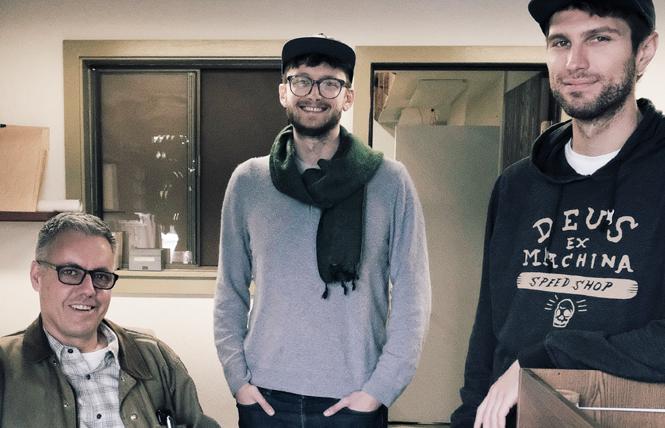 A new San Francisco-based cannabis delivery service is offering legal pot at 30 to 50% less than prices at brick and mortar retail stores.

That's the pitch from FlowerCompany.com, now serving the counties of San Francisco, Alameda, and Los Angeles with plans to open in Sacramento soon.

"I grew up with Costco," co-founder Ted Lichtenberger, 29, said in a telephone interview with the Bay Area Reporter. "That's the business model we're aiming for."

Like all cannabis consumers, my ears perked up when I read about Flower Company's prices, which are for the same brands sold in dispensaries, including flowers, edibles, and concentrates. Since legalization in 2018, retail prices of cannabis have gone up as much as 50%, half of that due to new taxes.

So when I reached Lichtenberger, I immediately asked him whether the start-up was using the same business plan as ride-hailing companies like Lyft and Uber: generating revenue by pricing items below cost in order to create a rapidly growing business. I was not the only person who wondered out loud whether this was Flower Company's business plan; several industry executives, who would speak only on the condition of anonymity, had similar thoughts.

"Absolutely not," said Lichtenberger. "We have a lean business model and are able to sell with lower markups" than retail stores. Lichtenberger acknowledged that retailers all pay the same wholesale price for branded products, but that Flower Company simply operates on smaller markups.

Flower Company charges customers an annual upfront fee of $79 to use its service, which still makes its products a bargain for anyone who plans to spend several hundred dollars during the year. Orders are accepted over the weekend, beginning at 4:20 p.m. Fridays, and are delivered later the following week. As the company expands, it plans to add a more rapid delivery option. Currently, new customers can place their first order without paying a membership fee.

Lichtenberger, who worked for the elite consulting firm McKinsey and Company before getting into the cannabis business, said Flower Compoany is run by three partners: himself; Tony Diepenbrock, 29, an engineer whose background is in the technology industry; and Scott Davies, 54, a longtime Humboldt County grower. All are straight allies.

Before founding Flower Company, the three created a brand of products, Humboldt Legends, and developed a software supply chain that would enable them to buy and distribute cannabis with minimal expenses. They also launched Old Pal, an economical flower and vaporizer oil brand. Flower does not have licenses to cultivate or distribute, Lichtenberger said, but uses the same legal growers and distributors that the rest of the industry does.

While its product selection varies, right now consumers can buy Kiva chocolate bars for $12 ($22-$24 at many San Francisco dispensaries) as well Maven flowers, a top shelf indoor brand for $26-28 for an eighth ounce, compared to $60 in Los Angeles.

The company's goal, said Lichtenberger, is to pull people away from buying black market products, which have typically not undergone testing.

"We want to add to the California tax base," he said. Citing industry studies by Arcview and BBS, Lichtenbergrer said illegal sales appear to be four times larger than legal ones in California.

Right now, the future of the company looks rosy, with companies in Oregon and Massachusetts indicating an interest in partnering with Flower Company, Lichtenberger said. He expects competition, "but that's good," he added.

Details about future plans and financing are under wraps, as the company is preparing to raise $8-$10 million in a Series A private financing round, he said, adding that initial backing came through angel investors.

While the founders hope the company will bring a profitable return for their investors, they are also interested in continuing their community outreach programs, in which they have offered free memberships for financially strapped medical patients through the nonprofit East Bay Canna Community.

Joanna Arenstein, the former director of East Bay Canna, praised Lichtenberger's efforts. In an email to the B.A.R., Arenstein wrote, "Ted always impressed me with his humble generosity. He found creative ways to support the cannabis community and never asked for anything in return, which made the community want to support him and his company more. It was wonderful working with someone who wanted to give for giving's sake, and not out of obligation or for media attention. That kind of pure, humble giving is becoming more rare, which makes me revere it that much more."