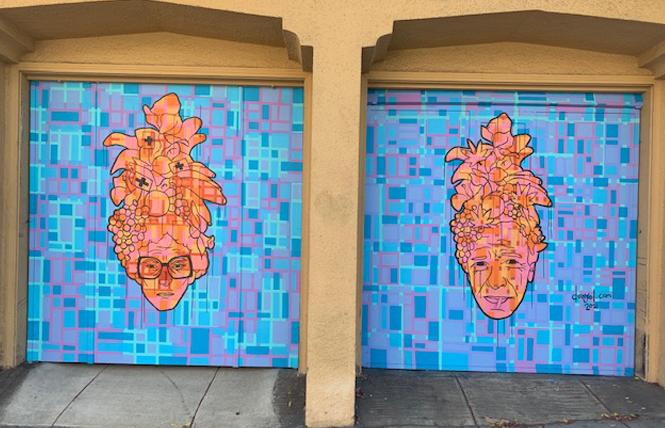 It's "Croptober," the time outdoor cannabis is ready for harvest and, this year, also the time that cannabis compassion programs are gearing up to go back into business. Compassion programs distribute cannabis products to low-income medical patients but they slowed down because Proposition 64 (2016), which legalized the recreational sale of cannabis starting in 2018, also contained a provision that hurt the compassion program by requiring operators to pay the sales tax on donated goods.

Thanks in large part to the passage of Senate Bill 34 in 2020 — waiving the tax on donated cannabis products — the programs are back in business and bigger than ever. The bill was sponsored by gay state Senator Scott Wiener (D-San Francisco), who has been a major supporter of cannabis during his political career. As previously reported in the Bay Area Reporter, the bill was named the Dennis Peron and Brownie Mary Act. Peron, a gay man, and Mary Jane Rathbun, known as Brownie Mary, were medical marijuana pioneers. Peron died in 2018, Rathbun passed away in 1999.

Two longtime cannabis advocates, David Goldman and his husband, Kenneth Koehn, have launched a new compassion program under the auspices of the San Francisco chapter of the Brownie Mary Democratic Club, where Goldman is president and Koehn serves as secretary. The gay couple had been operating a compassion program informally in the Castro for years, with mostly neighborhood residents who met monthly at their home to pick up donated products.

The new program is currently serving some 30 patients but has a waiting list for low-income patients with a physician's recommendation.

In a telephone interview with the B.A.R., Goldman urged anyone interested in joining the movement for improved cannabis access to attend the club's virtual meetings on the second Wednesday of every month. They are currently looking for a new space to eventually resume in-person meetings, Goldman said.

While the Brownie Mary club program is not limited to gay men, Goldman, who lives in the LGBTQ Castro neighborhood, has brought many residents into it and estimates the club will donate about $30,000 worth of products. The Brownie Mary club has recruited the California Street Cannabis Company and Ease to be its supply chain partners.

Goldman was also encouraged by the September 22 San Francisco Board of Supervisors vote on an appeal to approve a new cannabis dispensary at 5801 Mission Street. The vote was 8-3 with no votes from Supervisors Connie Chan (District 1), Gordon Mar (District 4), and Ahsha Safaí, who represents District 11, where the dispensary will be located. During public comment, dozens testified in support, only two people spoke against the project.

That vote came about after the dispensary was first approved by the San Francisco Planning Commission by a vote of 4-2. The neighboring church filed an appeal of that decision to the San Francisco Board of Supervisors.

Sweetleaf Collective
As reported previously in the B.A.R., Sweetleaf has been donating to low-income medical patients, most with HIV or cancer, for several decades. Joe Airone, its founder and executive director, told the B.A.R. in a recent phone interview that the group hopes to donate $2 million worth of pot this year.

Airone, a straight ally, said his group is also compiling a wait list.

Airone said the program has undergone some changes. Sweetleaf used to deliver products donated by growers but that too was prohibited by the cannabis legalization measure, requiring the group to use legal, already packaged products. Sweetleaf is partnering with SPARC, founded by a gay man, Erich Pearson.

Sweetleaf is growing rapidly. Its patients have received over $3.5 million worth of cannabis since 1996. Sweetleaf has launched its own fundraiser to pay for the compassion giveaway, selling lighters and rolling papers through dispensaries and delivery services. They retail for $3 each. The money raised from the sale of one lighter or one pack of rolling papers goes to pay the overhead on dispensing 3.5 grams of compassionate cannabis, Airone said.

Airone said Sweetleaf gave away more than $500,000 worth of cannabis last year and, thanks to a recent donation of 200 pounds of pot, the goal this year is the aforementioned $2 million. Airone said they are in talks with dispensaries in Humboldt, Mendocino, Sonoma, Sacramento, and Los Angeles counties and are hoping to have more locations providing free medicine.

In a prepared statement, legislative sponsor state Senator Ben Hueso (D-El Centro) said that "end-stage patients in California medical facilities are given heavy opiates that take away precious last moments with family and friends," Hueso said. "This is a simple yet important move that brings relief, compassion, and dignity" to Californians.

The law was named after Ryan Bartell, a California native and Coast Guard veteran who died in 2018 after fighting pancreatic cancer. Bartell was given morphine and fentanyl in the last few weeks of his life and was unable to keep awake for his family and friends, according to the legislation.

New SF dispensary approved
And finally, congratulations are in order for Oakland's Amber E. Senter, a longtime cannabis entrepreneur, on the San Francisco Planning Commission's approval of a dispensary at 2428 Clement Street in the Richmond district. On September 30, the commission approved the retail store, following a three-year wait from the time Senter first filed her application for a new business.

Senter, a lesbian, was also honored in early October with two awards during a cannabis industry retreat. Senter, who is president of Breeze Distro, a distributor of cannabis products, was recognized for having the best equity organization and the best social equity program in California.

"We accept these awards on behalf of all the advocacy organizations doing the hard work of lowering barriers of entry for Black and Brown people in cannabis," she posted on Facebook.

As previously reported in the B.A.R., last year Senter launched the first publicly funded social equity kitchen supporting people of color to enter the infused cannabis market. Senter is also a co-founder of "Supernova Women," a 6-year-old nonprofit whose mission is to empower people of color to become self-sufficient shareholders in the cannabis industry."