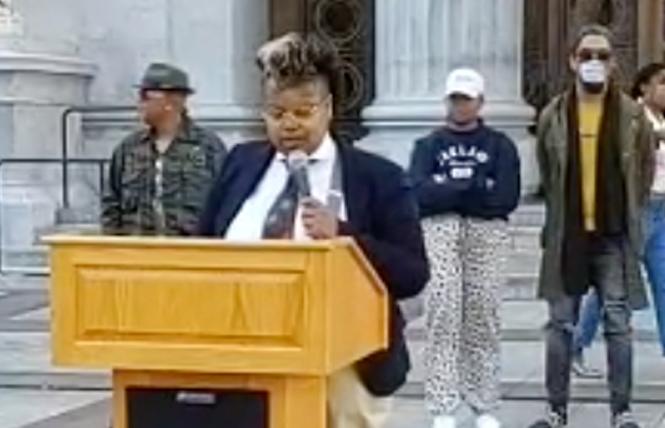 The news conference was organized by two queer industry leaders, Amber E. Senter, founder of Supernova Women, a group promoting Black and Brown women in cannabis, and Nara Dahlbacka, a partner in the LGBTQ cannabis consulting firm the Milo Group.

Senter, a lesbian who owns and operates cannabis businesses in manufacturing, distribution and cultivation, said she called for the news conference after more than 25 cannabis businesses lost over $5 million in a spate of targeted robberies the weekend of November 15, when people also burglarized downtown San Francisco shops and at least one dispensary, Bay Area Safe Alternatives, located at Grove and Divisadero streets.

Senter said the cannabis industry is now facing more dangers than before marijuana was legalized in 2016. The industry is asking for "real time response" by the Oakland Police Department, she added, and a reduction on Oakland's city taxes as well as state cultivation and excise taxes.

Mayor Libby Schaaf's office did not return the Bay Area Reporter's inquiries about police department staffing, but Schaaf held a news conference that same day where she said Oakland believes in a "comprehensive and effective approach to gun violence."

Acknowledging shortages in police staff, Schaaf promised to bring a "revised hiring plan" to the City Council. "We will be presenting an analysis to reverse the cuts planned for eight months from now, making a case that additional staffing is necessary because of this violence spree," she said. "There is nothing progressive about unbridled gun violence."

Although he didn't specifically address the cannabis industry crimes, Oakland Police Chief LeRonne Armstrong held a news conference November 30 to discuss the surge in violent crime as well as police staffing issues. A gay father was shot in the mouth inside his West Oakland home by what police say was a stray bullet, as the B.A.R. noted in a story this week.

Armstrong claimed the department was "prepared" for the recent spate of caravan robberies throughout the area, but acknowledged that current levels of staffing must be increased. With 676 sworn officers on staff, the department has the lowest staffing levels in several years, with 740 on board a year ago, he said.

Some of those shortages will be alleviated by two classes that will graduate from the police academy in coming months, 26 this month and another 39 in January.

Armstrong also called for improved use of technology to prevent and solve crimes. The fact that Oakland doesn't have a citywide surveillance program "puts us behind the 8 ball," he said.

Tax relief requested
In terms of taxes, Oakland has one of the highest tax rates in the state, at 10%, while neighboring Berkeley is 5% for non-medical and 2.5% for medical. Emeryville has a 3% tax, according to a 2019 San Francisco Chronicle article where the City Council voted to phase in a tax reduction.

Senter, whose equity manufacturing business was burglarized and damaged, said in an interview with the B.A.R. that the crime spree had been going on in the East Bay for several months.

Dahlbacka said previous pleas for a tax cut have fallen on deaf ears. Oakland's high rate of taxation is threatening the viability of cannabis businesses because shoppers can drive a few minutes from Oakland to other cities.

Senter emphasized the immediate need for tax relief. "Cannabis equity businesses (which are owned by individuals who have been harmed from the war on drugs) need more money and resources," she said. "Small businesses and small farmers need help. Piling on and increasing taxes, and now the threat of robberies and violence, is proving to be unbearable for most cannabis operators. When we are faced with targeted attacks, the effects are magnified. Our communities do not have the runway for robberies and tragedies of this kind. We need more protection and we need more money for security so that we can protect ourselves."

In addition to stolen merchandise and money, the alleged thieves damaged and destroyed equipment at a number of dispensaries, including Senter's shared manufacturing equity kitchen. "We'll have to close for at least a week," she said. That business is a training ground for equity applicants to learn the business, she said. While insurance will cover losses at some businesses, "that can take forever," she said. In the meantime, cannabis businesses may not have the capital to tide them over.

"In a year where the pandemic and global logistics has disrupted business growth and sustainability, additional robberies mark another significant barrier," she added.

J. Henry Alston Jr., co-founder of cannabis brand James Henry said, "This is just so heartbreaking and stomach-turning. We employ 14 people and we have been trying to grow our business since we first started in 2017."

Alston, who identifies as queer, said the damage and stolen goods represent significant losses that they have to find a way to cover. This includes local and state taxes on the inventory that has been stolen.

"This one might be too much for us to overcome," Alston said, adding that his business was robbed five times during the week before Thanksgiving. "We need help from the Oakland Police department to come up with real solutions."

Chaney Turner, an activist who is chair of the Oakland Cannabis Regulatory Commission, said neither the mayor's office nor the city administrator's office has been willing to prioritize safety.

Police "shouldn't take hours to respond to a violent burglary," he said. "Business operators have spent years building their businesses," he added, with many giving back to the community with compassionate medicine.

"They don't deserve to be treated like this by the city supposed to be the champion of cannabis equity," he said.

FLYT Lounge and delivery service in Oakland owner Paul Semonian, who grew up in the East Bay where his parents taught school, said the city is "neither a safe place to live or to work." With the police claiming that they don't have resources to adequately protect the community, Semonian asked, "Where are the voices of the mayor and (vice mayor Rebecca) Kaplan?"

Oakland City Councilmember Rebecca Kaplan, a lesbian who serves in the at-large seat, did not return a message seeking comment.

SF supes OK tax break
Speaking of taxes, the San Francisco Board of Supervisors on November 30 unanimously approved an ordinance suspending the city's cannabis business tax for the 2022 tax year.

"Cannabis businesses create good jobs for San Franciscans and promote safe, regulated products to their customers," Mandelman stated in a news release. "Sadly, the illegal market is flourishing by undercutting the prices of legal businesses, which is bad for our economy as illegal businesses pay no taxes while subjecting workers to dangerous conditions and customers to dangerous products. Now is not the time to impose a new tax on small businesses that are just getting established and trying to compete with illicit operators."

The legislation must be voted on a second time by the board at its December 7 meeting and then sent to Mayor London Breed for her signature.