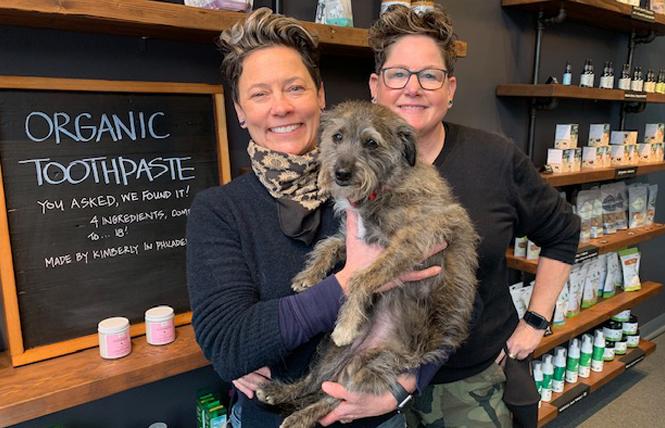 For Jen and Kristi Maxwell, 2020 was the year they began "living the dream."

The couple, who married in 2008 (when Kristi took Jen's last name), had the same vision: to open a neighborhood-centric business that would add value to the community. The specific idea of opening a pet-related business was Jen Maxwell's, who learned about pet health and nutrition while working at Pet Food Express.

In late November, they opened the doors to Maxwell's Pet Bar at 1734 Church (between 28 and 29th St.) a storefront previously occupied by a dog groomer, VIP Scrub Club, which closed last year and had been owned by a lesbian couple, Sage Cotton and Lancy Woo. (The Maxwells said that they don't identify as lesbian or queer because they "don't like labels.")

Maxwell's features more than a dozen brands of fresh natural pet food as well as supplements, including the trendy CBD, which has become increasingly popular for use in quelling anxiety in dogs and cats. In addition, five oversized orange bathtubs are available for self-washes. Most days, Hazel, the couple's 3-year-old rescue terrier, is at the shop.

The day I visited in early January, I asked the women to put together a selection of their favorite foods for my cocker spaniel to try. When I told them I normally served Trader Joe's dog foods, they grimaced — the same reaction I've gotten from a number of veterinary professionals, who seem to agree that natural, whole foods are higher quality than the kibble sold in most grocery stores.

The women suggested a handful of products, including a 2.2 pound bag of "gently air dried" New Zealand free-range chicken, which my dog inhaled at record speed. I loved the product too: the smell, the look, the package, and the fact that the food was 96% chicken, organs, and New Zealand Green Mussels. I also brought home a container of frozen winter squash and a roll of raw duck, all eaten with gusto by my spaniel.

But I had a case of sticker shock when I saw the $46 price tag on the 2.2-pound bag of chicken. While it is true that fresh foods typically go further than kibble, I generally pay $25 for a 20-pound bag of kibble; it was like switching from a Volkswagen to a Tesla.

"Our furry friends deserve to eat as well as we do," Jen Maxwell said. "Grocery store kibble contains renderings, carbohydrates, and fillers. Whole foods are the way to go."

The women are both true believers in the cannabinoid cannabidiol, or CBD, for use in dogs and cats. (CBD, which is non-psychoactive, is one of at least 85 active compounds inside cannabis plants and has quickly gained favor among the wellness crowd.)

Often plugged as useful for overall health and wellness, both women say they have seen for themselves how useful CBD can be when used for anxiety. According to Jen Maxwell, studies now underway on CBD promise to yield scientific data on the compound's usefulness in humans and animals.

Kristi Maxwell, who has worked in the hair industry for almost three decades, owns a shop in San Bruno, which has been closed due to the pandemic.

She is optimistic that the new business will succeed. When I visited, the shop had only been open nine weeks, but already, business was gradually climbing.

"We're doing better than we had expected," Kristi Maxwell said. "We feel like we've been very well received."

For more information, go to https://maxwellspetbar.com/

SF dispensary approved
In other local cannabis news, the San Francisco Planning Commission has approved a 5,000 square foot dispensary and consumption lounge at 560 Valencia Street, between 16th and 17th streets, formerly the home of Blu-Dot Furniture.

The new business, dubbed Project 560 according to an article on Mission Local, expects to begin construction in June and is set to open in early 2022. It will have an 835 square foot consumption space, according to the company's application.

And in the Castro, the Flore Store at 258 Noe Street, between Market and Beaver streets, has announced its grand opening on 4/20, the unofficial national holiday for cannabis.

Co-owner Terrance Alan, who bought the business in 2018 but has had numerous delays, made the announcement in a prepared statement. Alan, who is gay, has a long history in the cannabis industry and was the chair of the San Francisco Cannabis State Legislation Task Force, which advised the city on how to regulate the industry under state Proposition 64.

And in news about a proposed cannabis dispensary that will not open, the cannabis magazine High Times had announced that it was putting a dispensary at Geary Boulevard and 20th Avenue, one of two the high-flying company planned to open in San Francisco. But when High Times' initial public offering fell through, the company announced it would not be entering the San Francisco market at this time.