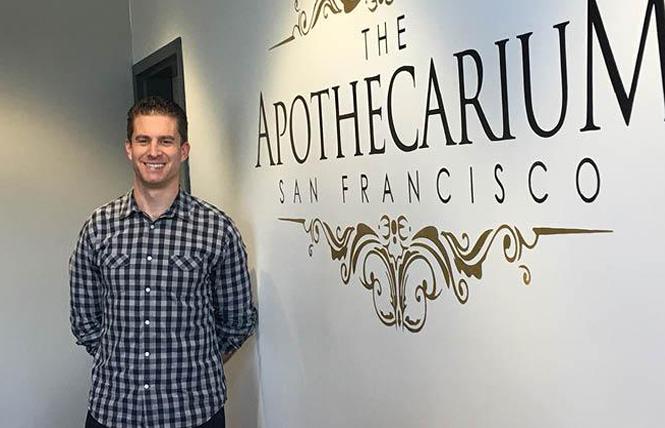 Although San Francisco cannabis industry leaders breathed a sigh of relief when the city reversed itself to allow dispensaries to stay open and operate as essential businesses after the stay-at-home order was issued in mid-March, layoffs and furloughs have hit some of the larger companies as demand for products in the COVID-19 era has remained weak.

Two of the largest local companies, the Apothecarium and SPARC, have each downsized.

Ryan Hudson, CEO and co-founder of the Apothecarium, whose flagship store is at 2029 Market Street, wrote in an email to the Bay Area Reporter, "The current economic situation due to COVID-19 and San Francisco's strict rules on social distancing inside retail operations have had an impact on customer traffic at The Apothecarium.

"Even though online orders for delivery and pickup have increased significantly, our business is facing a difficult time," he added. "Unfortunately, that means we have had to furlough a little more than 20% of our staff because of the current economic situation. We've also had to lay off a much smaller number. Twenty-five people total are affected. These were very difficult decisions involving staffers we love and respect. As business returns to normal we hope to welcome back our furloughed staff."

The Apothecarium was the Castro's first cannabis dispensary, opening at 2011 at 2095 Market Street as a medical dispensary. Since then, it has donated more than $400,000 in cash to community groups and nonprofits — plus more than $300,000 worth of in-kind donations, according to media consultant Eliot Dobris.

SPARC, which has a large footprint in the Bay Area, has also had to reduce its staff. Founded in 2010 by Erich Pearson, a gay man, at 1256 Mission Street, SPARC was one of the first in the city to incorporate a smoking lounge within its store. It also has two other dispensaries in the city and two in Sonoma County.

In a telephone call with the B.A.R., Michael Bossart, SPARC's director of strategy and implementation, said that the company has reorganized and eliminated some roles and has also furloughed seven people from its staff of 120. The company's executive team also took a cut in salaries, he said.

SPARC said the company has seen a huge shift to online ordering, although customers are able to shop in person, one at a time for physical distancing. SPARC has also "beefed up" its website, emphasizing online ordering, he said.

The recent protests of racial violence and the killings of African Americans by police has also taken a toll on both companies. The Apothecarium and SPARC were both victims of robbers who reportedly struck two-dozen dispensaries over the past few days, in protests that turned violent following the murder of George Lloyd by Minneapolis police.

As of Monday, June 1, the Apothecarium said it plans to open all three of its San Francisco locations later this week. Please check the website for the latest updates.

SPARC has closed all shops until further notice for the protection and safety of staff and customers. Check the website for updates.

Hard times for others, too
Hard times have hit a number of local manufacturers, including Somatik, which markets a line of infused cold brews in partnership with Ritual Coffee Roasters, as well as a line of chocolate products.

In a telephone interview with the B.A.R., Christopher Schroeder, a gay man who founded the company in 2016, said the firm's difficulties began before the pandemic kept people at home. Last fall, the cannabis industry went through months of rocky times when the investment market suddenly chilled.

Somatik downsized, laid off its staff of seven, and last month, closed its manufacturing facility to share a kitchen with another company.

"It was really a blow to have to let the team go," said Schroeder, who is still optimistic that the company can succeed, noting that Somatik is the only THC-infused cold brew on the market.

The pandemic has not only kept people at home, but also probably has discouraged many new users from experimenting with cannabis.

"It's a social activity. Many people enjoy cannabis with a friend," he said.

Oakland lesbian Amber Senter, who manufactures and distributes a line of her own products, said her business "really hasn't been hurt" by the recent developments. In a telephone interview with the B.A.R., Senter said that she hasn't had to furlough or lay off any staff and, in fact, is giving delivery workers additional "hazard pay" for working through the pandemic.

Senter, founder and CEO of Breeze Distro, a manufacturing and distribution company, also has two applications in the San Francisco pipeline for new dispensaries, one in the Bayview and one in the Richmond.

"I have to tell you that the folks in the Office of Cannabis have been working really hard" through the pandemic, helping her to push her paperwork through the system, she said.

Despite the seemingly gloomy retail sales, over three-dozen companies are advertising for help on the employment website, Indeed. While most of the jobs are entry-level positions in delivery or manufacturing, there are also a number of sales jobs with greater potential.

"Cannabis is hiring," said a May email from www.flowerhire.com, which labels itself a cannabis executive search and staffing company.

"Cannabis is a multidisciplinary industry that requires teams with both industry specific skill sets" as well as people from outside the industry with transferable skills and experiences, the email states.

Jobs in cannabis manufacturing "look a lot like other agricultural- or food-based manufacturing jobs — albeit with a lot more regulation and safety requirements," the recruiting company added.

"As cannabis goes digital and brand building continues, we see tremendous demand for folks out of tech and e-commerce. ... Many folks who have been hard hit due to COVID in other industries find themselves exploring cannabis as a future career," the company said.