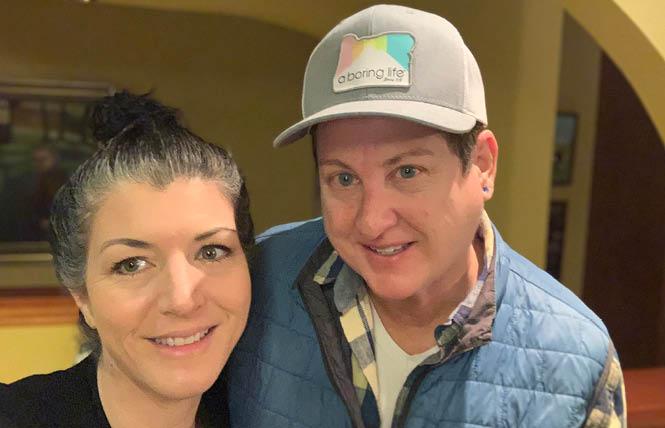 A year after selling Hip Chick Farms, their multimillion-dollar natural foods company, two Bay Area lesbians moved to a 10-acre lavender farm in Oregon to build what they hope will be their next successful startup: a CBD snack business.

CBD, or cannabidiol, is a nonpsychoactive component found in the cannabis plant. It's being researched for many possible medical benefits, and unlike tetrahydrocannabinol, or THC, CBD doesn't get you high. While there are no large scientific studies of its efficacy, people are using it to help manage a number of conditions, including pain, inflammation, anxiety, insomnia, and seizures.

Jennifer Johnson, 53, previously a chef at Berkeley's swank Chez Panisse, and her wife and business partner, Serafina Palandech, 47, an experienced fundraiser, last year launched A Boring Life, producing a line of raw, unfiltered local honey infused with CBD hemp oil as well as herb- and CBD-infused almonds and walnuts, and Boring Bones for dogs. The company is named after their new home in Boring, Oregon, a town of some 8,000 a few hours from Portland.

As previously reported in the Bay Area Reporter (LINK: ), the women launched a successful organic chicken company, Hip Chicks Farms, in 2013, which they sold to a competitor last year.

After the women married and had their first child, they were both ready to leave the Bay Area for a slower pace. At the time, Johnson was working long hours as the executive chef for the Getty family, while Palandech was juggling the business and family.

Having raised over $8 million for their organic chicken company (whose products were eventually sold in over 250 food stores), the women weren't daunted by the already-crowded market for CBD products. Because CBD is derived from hemp and does not have psychoactive properties, the regulatory landscape is less complicated than with THC-infused products.

As with their earlier venture, Palandech "handles the business side while Johnson is the chef and is in charge of operations," she said in a recent telephone interview with the B.A.R.

"Jen says I am the brains and she is the brawn," quipped Palandech. 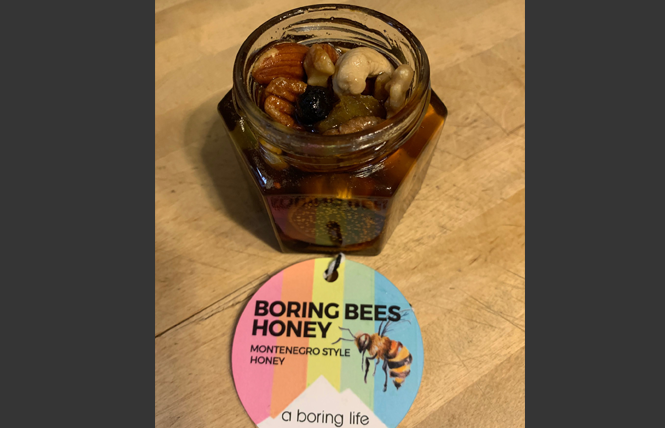 A sample of A Boring Life's honey. Photo: Sari Staver

Based on tasting some samples of their products the women sent me, they are scrumptious. The honey is infused with fruits and nuts and turned my lunch of cottage cheese into what could pass as dessert. (As far as the effects of CBD, I'll leave that to researchers doing a scientific study.)

The women have been recognized for their talents, being named "Most Innovative Women in Food" by Food & Wine magazine, and invited twice to the White House, where they prepared a meal for former President Barack Obama and his staff of 200.

Their interest in CBD came about after a close friend told them she was able to stop taking Klonopin, an anti-seizure medicine, when she began using CBD. Johnson began using it for attention deficit hyperactivity disorder, or ADHD, and Palandech for anxiety, she said.

"We were both enamored with its properties, saw opportunity to heal minds, bodies, and the environment" by producing a carefully sourced, high quality line of CBD products," Palandech said.

The idea for honey-infused products came about by chance, while Johnson was visiting family in Montenegro, a Balkan country, where she tasted some local honey.

She brought home a jar and the women agreed it had "tremendous potential" in the specialty foods market, with or without CBD. Using honey from a neighbor's farm, the women also added local nuts and fruits, hired a couple of employees to do marketing and distribution, and their startup was off to the races.

With the company just a year old, their products are available on their website as well as from Amazon. They are also sold at some 100 retail stores, mainly natural foods retailers. They plan to soon launch in thousands of other locations around the country.

And as far as the competition goes, "We carefully source our products," said Palandech. "Many of our competitors are getting their CBD from China. Ours comes from a farmer in Colorado, which we selected" after considering many other growers.

After a recent visit to the fancy food convention in San Francisco, where the women introduced a line of honey-products without CBD, they think they have "a much wider audience opportunity."

Anticipating a rapid growth spurt this year, the women launched a crowdfunding campaign through the website www.republic.co, hoping to raise $438,000.

"We chose Republic because their platform is focused on LGBT- and other minority-owned businesses," said Palandech.

"We're optimistic that we will be able to successfully launch this company. We did it once and we think we can do it again," she added.