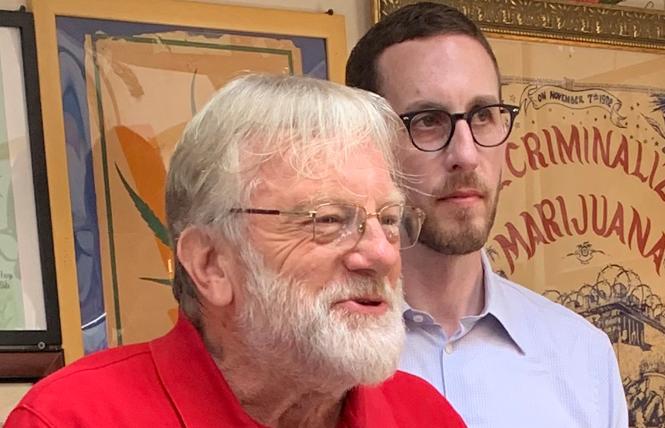 Despite the rollout of new products and retail outlets, both cannabis consumers and sellers are expected to face a difficult year in 2020.

While the Bay Area continues to approve the establishment of both new retail spaces and delivery services, prices are expected to jump close to 20%, thanks to new state taxes that went into effect January 1.

Even worse, it is unclear whether compassionate use programs, which offer free cannabis to people who are terminally ill and indigent, will get off the ground this year.

"The taxes are killing the small business owners," said entrepreneur Amber Senter, an Oakland lesbian who is planning to open two new dispensaries in San Francisco this year.

"We have got to continue letting our legislators know" about the difficulties the industry is facing, she said in a telephone interview with the Bay Area Reporter.

California collects a 15% excise tax from cannabis consumers; every transaction also includes a sales tax that is at least the 9.25% charged by the state on all consumer transactions and may be more when cities and counties have their own sales taxes. Those rates will remain the same in 2020, but retailers will face a 12.5% bump in taxes and farmers will see an increase of more than 4%, which are both expected to be passed on to consumers.

What's more, said longtime dispensary owner Wayne Justmann in a phone interview, "There is no end in sight to the many, many people who are sick and cannot afford" to buy cannabis.

A new law that is expected to encourage compassionate use programs takes effect in March, but it is unclear how quickly that niche will ramp up. Last year, California lawmakers approved, and Governor Gavin Newsom signed, Senate Bill 34. The legislation, authored by gay state Senator Scott Wiener (D-San Francisco), will allow retailers or other organizations to donate medical marijuana to low-income consumers without any additional tax to the seller or the user.

Justmann, 74, a gay man, has been a vocal proponent of compassionate use for decades.

"Taxation is crippling the industry," said Justmann, adding, "the excitement over legalization" was premature.

"Proposition 64 was a disaster," he added, referring to the voter-approved initiative that legalized adult recreational marijuana use. It went into effect January 1, 2018.

Before legalization, and its accompanying regulations and taxes, many dispensaries and freestanding organizations were able to donate cannabis to people who were indigent and needed medical relief, he said.

But once the businesses had to pay new taxes and comply with myriad new regulations, "of course they can't afford" to donate products without taking a big hit on their bottom line, said Justmann.

Justmann urged cannabis consumers to "let their elected representatives know" what has happened to the market.

An increasing number of farmers "have told me that they cannot afford to participate in the legal market," said Justmann. Some have left the business while others are turning to the black market to survive, he said.

The cannabis industry is still going through its growing pains, said Justmann, noting that a number of the larger organizations have downsized recently.

Pot-delivery company Eaze laid off 36 workers and replaced its CEO, according to an October story in the San Francisco Chronicle.

"It's a great company," said Justmann, "but I have to admit I was really surprised when I toured their downtown offices, with views from a high floor of the Embarcadero Center. There is a lot of confusion about who is going to be able to succeed" in this market.

Senter is confident that the two dispensaries she plans to open in the city will be successful.

Senter, who founded SuperNova Women, a networking group for women of color, said there are some rays of light amidst the darkness.

For example, she said, the city of Oakland reduced the taxes on cannabis from 10% to 5% over the next three years.

"That's the sort of thing we need to encourage," she said, adding that she's optimistic that consumers and industry leaders together can improve the climate in the cannabis industry.

Right now, the burden of taxes is making it increasingly difficult for businesses in the regulated market to compete with those in the unregulated market, she said.

Senter predicts that the new year will bring increased transparency to the industry.

"Some of the big businesses are going to crack," she said, exposing the mismanaged capital invested by the public markets.

"There will be a shake out," she said, "and I'm looking forward to the industry having room for small businesses to succeed."

SF equity dispensary opens
Gay-owned Eureka Sky was the first equity applicant to be approved by the San Francisco Office of Cannabis, but another one beat it to the punch and opened first.

As previously reported in the B.A.R., Berner's is a collaboration between two San Francisco natives, Shawn Richard and Gilbert Milam, known in the industry for developing Cookies, a family of trademarked cannabis strains and related merchandise. The brand also owns a non-cannabis retail store that opened at 1429 Haight Street five years ago, selling apparel and accessories.

The others involved with the project are Conor Johnston, a gay man who was chief of staff to London Breed when she was District 5 supervisor, and John Delaplane.

As previously reported in the B.A.R., the first equity applicant to be approved by the city was Eureka Sky, located at 3989 17th Street in the Castro.

Co-owners Romwald (Ray) Connolly and Desmond Morgan, a married couple, said that they expect to be fully open in January. Eureka Sky's equity applicant is Chris Callaway, a local marijuana grower who moved to the Bay Area 20 years ago to get involved with medical cannabis.