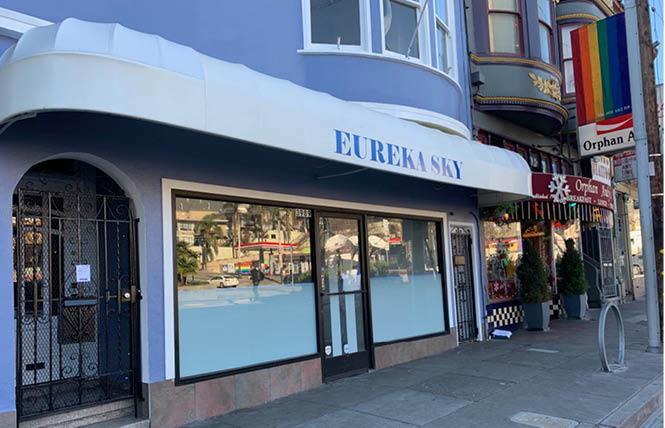 A married gay couple on Tuesday received the first business permit for equity applicants by San Francisco's Office of Cannabis for their soon-to-open Castro cannabis retail store, Eureka Sky. They plan to soft open after Christmas.

Co-owners Romwald (Ray) Connolly and Desmond Morgan told the Bay Area Reporter they expect to be fully open in January 2020. Eureka Sky is located at 3989 17th Street, adjacent to Jane Warner Plaza, on a retail block that has seen significant turnover in recent years.

The cannabis store is taking over the storefront that had housed the gift shop Wild Card, which moved into the space in 2006 and closed in May 2018 after 22 years in business. In the retail space next door Cafe De Casa, a Brazilian cafe, continues to work on opening its doors after missing its initial plans to welcome patrons in early November. It now hopes to open by mid-January.

The city's equity program enables cannabis businesses that partner with an equity applicant to receive priority review when applying for a business permit in the city. Eureka Sky's equity applicant is Chris Callaway, a local marijuana grower who moved to the Bay Area 20 years ago to get involved with medical cannabis.

Connolly told the B.A.R. that he and Morgan appreciated the work done by Office of Cannabis director Marissa Rodriguez and her staff.

"They have all been wonderful to work with," Connolly said.

Connolly and Morgan will live part-time in an apartment above the new retail location, which will be open seven days a week, tentatively from 9 a.m. to 9 p.m. The showroom is approximately 1,000 square feet. Eureka Sky will not offer delivery service or onsite consumption, Connolly said.

Connolly, who worked in software, and Morgan, who worked in biotech, both have had an interest in medicinal cannabis because their fathers died of cancer.

The men are hoping to introduce some new medical products next year, Connolly said. They also plan to carry pet-related CBD products, he added.

The planning commission in June approved Eureka Sky. Connolly and Morgan received unanimous approval for their concept from the Castro Merchants last year.

One person who spoke at the commission meeting worried about illegal drug sales. But Connolly promised that the storefront would contain at least six onsite cameras to monitor the behavior of customers. Anyone seen smoking on the street will be prohibited from buying at the store in the future, he said at the time.

The couple, who have no prior experience in the cannabis industry, had twice attempted to open retail cannabis stores in the city, one near Fisherman's Wharf and one at 2352 Market Street, but both applications were subsequently withdrawn. Their cannabis store will be the second marijuana retailer in the city's LGBT Castro district, as the Apothecarium was the first to open in 2011.

In 2016 it relocated up the street to 2029 Market Street. In February TerrAscend, a Toronto-based biopharmaceutical and wellness company that is focused on the cannabis market, acquired the Apothecarium in an acquisition valued at $118 million in cash and stock.