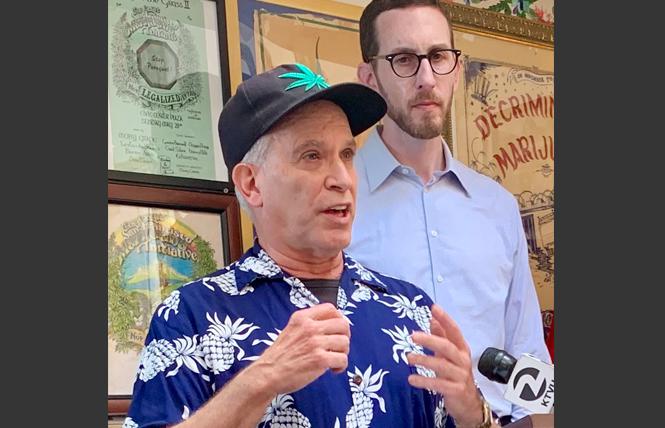 State Senator Scott Wiener (D-San Francisco) and more than a dozen cannabis activists urged Governor Gavin Newsom to sign Senate Bill 34, which will make it possible for indigent patients to receive free cannabis. Such programs, known as compassionate care, have suffered over the past 18 months because they have been forced to pay taxes, typically at least 25%, on the goods they have received as donations.

At a news conference held at the "Castro Castle," the former home of the late gay marijuana advocate Dennis Peron, Wiener said the bill was necessary because one of the "unintended consequences" of Proposition 64, which passed in 2016 and legalized adult use of cannabis, was that the bill imposed new taxes, making it very difficult for indigent patients to continue receiving the free cannabis they'd gotten for the past two decades.

Prior to passage of Prop 64, numerous organizations were able to donate free cannabis to patients without paying the government any taxes. Following passage of Prop 64, local governments had discretion in setting tax rates, which have added an average of at least 25% to the cost of retail cannabis, driving many people to the black market.

Wiener, a gay man, noted that he has lived in the Castro, near Peron's home on 17th Street, for the past 22 years.

"An entire generation of activists" risked their own safety to provide medicine to people who were getting sick and dying of AIDS, he said. "We owe them a huge debt of gratitude."

According to Wiener, the authors of Prop 64 probably "didn't intend to wipe away the gains" made in the past two decades, when many groups were launched to help patients get medicine.

But it did have that consequence, a number of activists said. David Goldman, a gay man who is president of the Brownie Mary Democratic Club, said that before Prop 64 was passed, he was able to regularly supply free cannabis to 25 patients in meetings at his home in the Castro, thanks to donations from growers. The $2,000 worth of cannabis often available for each patient would now cost Goldman about $500 in taxes, he explained, causing him to cancel the program. If the bill passes, Goldman hopes to restart the program, he said.

Another activist, Joe Airone, a straight ally who founded the Sweetleaf Cooperative in 1996 to distribute free cannabis to AIDS and cancer patients in San Francisco, described the current dire situation many patients face, now that most compassionate programs have had to close their doors.

"Patients have told me they have to choose between buying food or buying cannabis," Airone said at the news conference. "It's a horrible predicament."

Airone introduced Ed Gallagher, a visually impaired man with AIDS and cancer, who has been getting cannabis from Sweetleaf for many years.

"I couldn't function without it," said Gallagher.

Sean Kiernan, representing Weed for Warriors, an organization of veterans who are cannabis activists, said the proposed legislation won't solve all of the problems of cannabis access for veterans, "but it's an on-ramp," he said.

Kiernan, who described himself as a "suicide survivor," pointed out that Veterans Affairs is one of the largest purchasers of pharmaceuticals in the nation, including psychiatric drugs and opioids.

"We should be giving our veterans a choice," by also providing cannabis, he said.

Wiener's bill is backed by the cannabis industry, said Eddie Franco, who represented the California Cannabis Industry Association. According to Franco, indigent patients are increasingly buying from black market dealers to avoid the taxes levied by retail cannabis shops.

According to Franco, under SB 34 all of the donated cannabis will still fall under the "track and trace" umbrella mandated by Prop 64, which requires the products to undergo the same testing as those for sale at retail locations.

"This is not a loophole to get free cannabis," he said.

At the news conference, when asked why Brown vetoed the bill last year, Wiener said he "never understood the reasoning" behind the decision.

Brown's veto message stated that SB 829 contained provisions that conflicted with Prop 64, which prohibits giving away products free of charge.

A number of speakers voiced optimism that Newsom, who replaced Brown after he was termed out of office, would sign the bill, which had wide bipartisan support.

Wayne Justmann, a longtime cannabis activist who worked closely with Peron to distribute free medical cannabis, said that Newsom has been a "longtime supporter" of cannabis.

According to Justmann, Newsom signed a letter of recommendation to a landlord when Justmann opened a dispensary in the mid-1990s. "We believe we have his support," he said.

Taxes in Oakland
Taxes on cannabis are also an issue in Oakland, where activists and business people are hoping the City Council will eliminate the 10% tax on pot that goes directly into the city's coffers, said Amber Senter, a manufacturer and distributor who launched her company, LLProducts Inc., earlier this year.

The push to eliminate the tax began last year, said Senter, a lesbian, and threatens businesses like hers that take in less than $1.5 million in revenue.

"The tax is crushing," said Senter, who said she might have to move to San Francisco if it's not eliminated.

"But this isn't the solution," she explained. "Oakland must be sure their policies encourage new business" not chase them away, she said.

"Larger businesses may be able to survive" with the tax, she said. "But for small businesses, that can be our total profit margin. We're asking that we just be taxed at the same rate as other businesses."

If Oakland "wants to be a national model for equity business, as we all hope they will," there has to be tax relief, she added.

People who are interested in supporting small cannabis businesses should let City Council members know their feelings, she said. The council could take up the issue as early as October, she added.