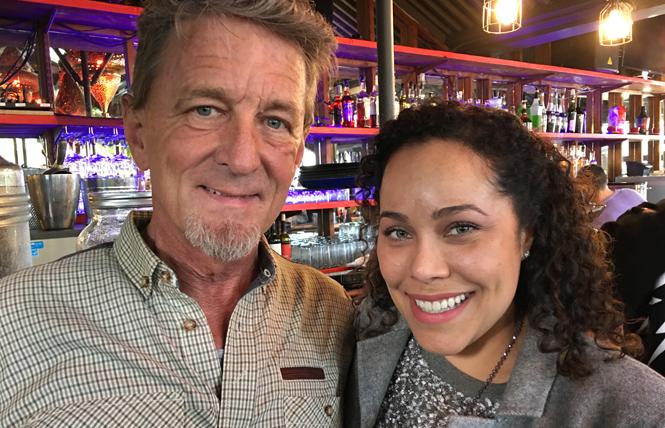 More than 100 people crowded into the Castro's Flore on Market recently, anxious to shake hands with Marisa Rodriguez, the newly appointed director of the city's Office of Cannabis.

Rodriguez, who declined to give her age, spent the last nine years as an assistant district attorney in San Francisco, where she was involved with the city's groundbreaking program to retroactively wipe out more than 9,000 marijuana-related convictions. She took over the cannabis office in April after the previous director, Nicole Elliott, was named senior adviser on cannabis in Governor Gavin Newsom's Office of Business and Economic Development.

At the May 23 event at Flore, Rodriguez was the guest of honor at a meet and greet hosted by cafe proprietor Terrance Alan, former chairman of the now-defunct Cannabis State Legalization Task Force, as well as an applicant to open a new dispensary, Flore Store, across the street from his café. Formerly known as Cafe Flore, it has a long history in the city's cannabis movement and is where late marijuana activists Dennis Peron and Mary Jane Rathbun, aka Brownie Mary, often met.

With a crowd six-deep in line to talk to Rodriguez, we decided to say hello and follow up with a telephone interview to get an update on the latest developments in the city's efforts to shape and regulate the cannabis industry.

Rodriguez suggested we scan her office's website (https://officeofcannabis.sfgov.org/) to get an instant picture of what is happening now in the cannabis business.

To be sure, the map of the existing 37 retail dispensaries is just a hint of what's to come, since another graphic points out that there are more than 293 applicants waiting for licenses, which includes people who want to open delivery, manufacturing, cultivation, and distribution businesses.

The website, a gold mine of details about how to get into the industry, can answer many questions about the complicated process and gives contact information for further details.

Currently, Rodriguez and her staff of four are spending the majority of their time processing applications from equity candidates, a term used by the city to even the playing field by lowering the barriers to cannabis licensing for those hardest hit by the war on drugs. People can qualify as equity applicants based on eligibility criteria including their residency, income, criminal justice involvement, and housing insecurity.

Rodriguez conceded that the application process is complicated and time-consuming, but said that she is "optimistic" that her staff is making "good progress" in making its way through the long list of applicants.

The application process began 18 months ago, she explained, and "thanks to the city committing more resources to the office," it has gotten "some momentum going" in getting people through the first phase of the application and into the next, where they must be approved by the planning department.

When Rodriguez took over, some 24 applicants had finished their work with the office and were being processed by the planning department. Since she came on board, 10 more applicants were forwarded to planning.

Rodriguez predicted the first of these equity applicants will be finished with the entire application process by the end of this year.

In addition to being time consuming and complicated, getting a license is "incredibly expensive," acknowledged Rodriguez. If you want to open a dispensary in a pricey area like Union Square, she said, start-up costs can easily be at least $1.5 to $3 million.

Most equity applicants don't have that kind of cash or credit line available, she said, but many are finding investment partners who can either provide commercial space for their business or technical assistance in launching the business, she said.

The city's cannabis website also lists potential investors who have indicated an interest in partnering with an equity applicant, Rodriguez said.

As for the concerns of the general public, Rodriguez said "number one" is probably whether they want a new cannabis business to open in their neighborhood.

While much of the stigma of cannabis has disappeared since the state has legalized the herb for recreational use, "there will always be some people" who are opposed to having any sort of cannabis business near their home, she said. A number of studies have indicated that cannabis businesses do not present a danger to a neighborhood, either in terms of additional crime or harm to other existing shops.

As the new applicants make their way through the planning department, often accompanied by public hearings, Rodriguez said she expects that there will continue to be differences of opinion among San Franciscans.

"Both sides are organized," she said of the cannabis industry and opponents.

"We will continue to hear both sides of the story," she added.

The Office of Cannabis is located in City Hall Room 018, 1 Dr. Carlton B. Goodlett Place, and is open weekdays from 1 to 5 p.m.