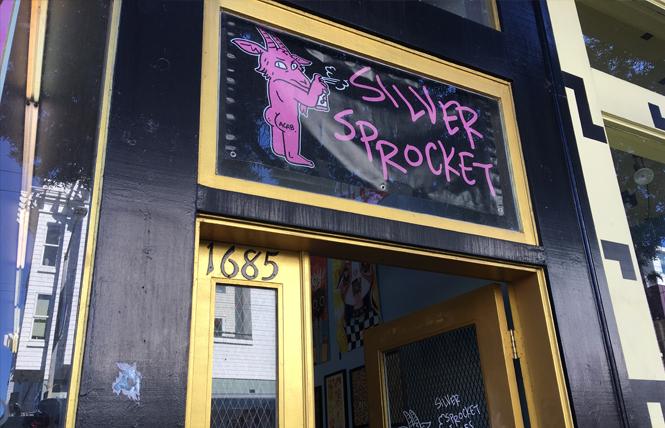 San Francisco's first cannabis dispensary equity applicant got the green light from the city's planning commission this month, enabling the founders of Cole Ashbury Group to begin renovations on a storefront at 1685 Haight Street.

On February 14, the commission voted 6-0 to approve a conditional use permit for the proposed dispensary in a 1,250 square foot storefront now occupied by a pop-up business.

The San Francisco equity-owned cannabis program enables people from communities that have been affected by the war on drugs to receive incentives to apply for licenses to open retail dispensaries.

At the hearing, Cole Ashbury Group CEO Shawn M. Richards, a San Francisco native and founder of the anti-violence group Brothers Against Guns, told the commissioners that he began selling drugs at age 13, but has turned his life around and hopes the new business will "benefit the community."

The others involved with the project are Conor Johnston, a gay man who was chief of staff to London Breed when she was District 5 supervisor, and John Delaplane.

At the hearing, dozens of activists testified in favor of Richards' application, which had also been recommended for approval by the planning staff. Individuals from over a dozen neighborhood business and community groups said they were in favor of the proposed business.

Only one speaker, another applicant for an equity permit, testified against the project, claiming that the founders of Cole Ashbury Group seemed to have received preferential treatment because of their relationships with City Hall employees.

David Goldman, president of the Brownie Mary Democratic Club, said he has known Richards and Johnston for many years and is "confident they will be exemplary merchants."

Michael Cohen, also a member of the gay, cannabis-oriented Democratic club, echoed the sentiments, praising Cole Ashbury Group for "doing their homework" in getting its application in promptly.

In response to questions from the commissioners, the founders said the new business has hired a professional security firm to staff the shop and will have "cameras all around" the interior and exterior.

Longtime gay Planning Commissioner Dennis Richards (no relation) said Shawn Richards' life has been "a great turnaround story" and offered him accolades for bringing a complete application — "a fully baked cake" — to the city.

The dispensary is expected to open before the end of the year.

Shawn Richards is also a founding member of the SF Equity Group, a grassroots organization designed to address the damage sustained by communities of color as a result of the government's war on drugs.

Following the planning commission decision SFEG said on its website that the approval was "certainly a cause for celebration."

"At the same time," the group wrote, "there's an enormous amount of work yet to be done in San Francisco and across the nation. The War on Drugs has disproportionately targeted people of color and devastated communities for decades, creating damage that will take years to heal.

"While the SF Equity Program was established to correct the wrongs done by the War on Drugs by prioritizing those impacted for licensing and permitting, the fact that it took well over a year from the program's creation to reach just one equity-owned business, points to how many barriers remain," the statement read.

The group urged other equity applicants to contact it at http://www.sfequitygroup.org to learn about available resources.