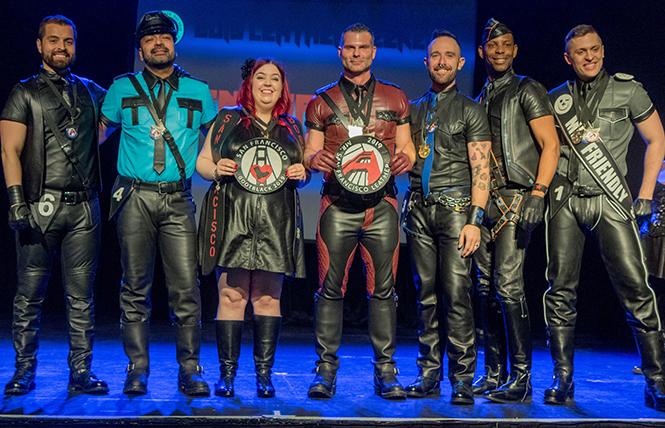 Mr. S Leather hosted the opening meet and greet party at their store on Thursday night. A large, diverse crowd socialized while some also shopped. The contestants were introduced and the audience immediately started deciding on their favorites. 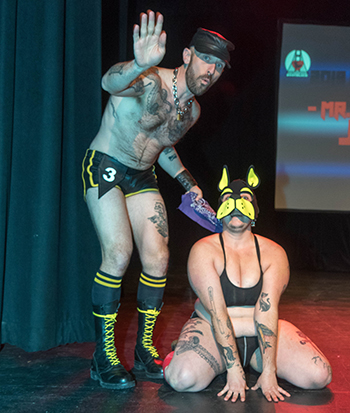 A big hit with the audience was the grab bag impromptu fantasy portion of the Mr. SF leather contest. Here Gunner Friesen amuses the crowd by making his pup wave to the audience. photo: Rich Stadtmiller

I liked the way they handled the fantasies. Each contestant pulled three items from a bag and had to create a two-minute scene with the same selfless volunteer bottom. It was fun, sometimes silly, and it put every contestant on a level playing field; a great addition to the contest.
For the leather community awards portion of the evening, local people, clubs, organizations and events were honored for their contributions in 2018. 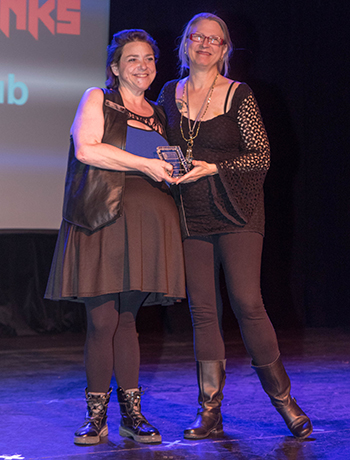 On Saturday, those vying for a sash in this year's contest were interviewed at SOMArts in open-to-the-public interviews and there were also kink education sessions and a vendor area open for business.

That evening the main contest event was held.

Well-known stage performer Alotta Boutté sang the National Anthem to start the evening off. Then she and Lance Holman served as the night's emcees.

Competing for the SF Bootblack title was Allison Boots.

Charged with making sure the score tally totals were accurate were Jay Rose and Rob Brooks.
There was one Bootblack contestant and there were six men competing to be Mr. SF Leather 2019. I was amazed at how well they all did. Many people in the audience were telling me as the contest progressed that they couldn't decide who they thought was going to win the Mr. SF Leather portion.
They all did themselves proud. 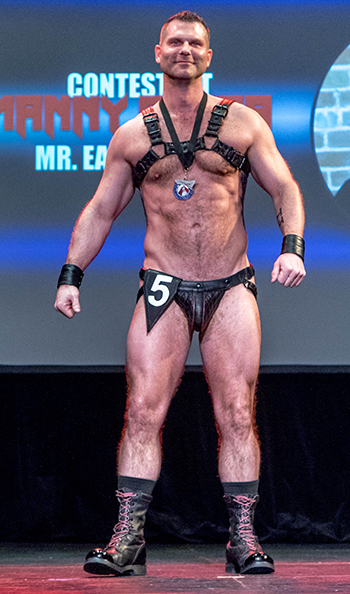 Allison Boots entered and exited the stage to cheers and applause from a clearly supportive crowd and when the scores were tallied, she garnered the points to become the new SF Bootblack 2019.

Amp Somers won the Leather Heart Award voted on by his fellow contestants.

Congratulations to Allison and Jawn. I hope your title years are both fun and fulfilling.
All the people who work hard to create such a weekend often go unrecognized. I'd like to point out some of the main contributors to the weekend's success. I'm sure I'll miss someone. So, apologies in advance.

The weekend and associated contest could not happen without a lot of volunteers. Spencer Adam was the Stage Manager with Fifi LaFille the Assistant Stage Manager. Den Staff was Jesus Nunez-Jirgl, Ub Kelly, Boy Lynn, Ken Berard, and Alex. Lighting Technical Director was Jesbian with Kevin as the Sound Technical Director. Judges' Coordinator was Pixie Alexandrite and Judges' boy was Boy Tyler. Community Awards Co-Chairs were Larry Rivera and Rio Spooner. The weekend's logo was created by Colton Long. Catering was done by Gather and Grub. Staff Photographer was Devlin Shand.
And, that's a wrap for another Leather Alliance Weekend. Lots of other fun stuff took place I didn't have the space to report. So, you'll have to come check out next year's Weekend for yourself to experience it all firsthand. Be on the lookout for details which you can do by bookmarking the Alliance's website for future reference. www.leatheralliance.org