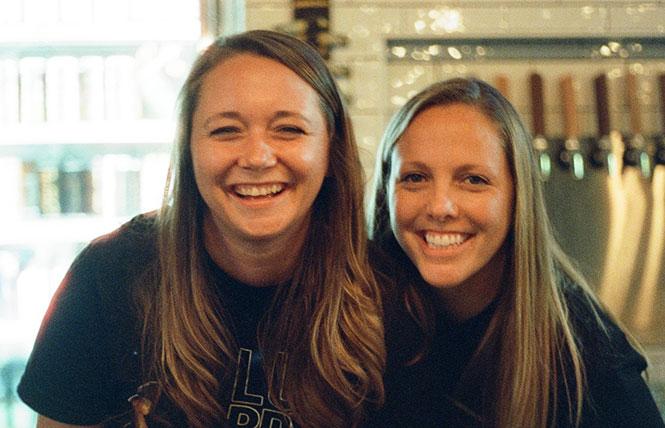 Years ago Kristen Iosco had tended the bar at Tap 25, a taproom in downtown Livermore showcasing more than two-dozen beers on tap. She then was hired as the general manager at Almanac Beer Co., a taproom and brewery in Alameda.

She stayed in touch, though, with her former bosses during the COVID-19 pandemic and inquired in November 2020 if they would be interested in selling the business. Deciding to move permanently to Vermont, their old bosses worked out a deal to transfer ownership to Iosco and her wife, Briana, whom she met nine years ago through friends in the beer industry.

"I think they were just ready to fully leave California. It became difficult traveling during the pandemic," said Kristen Iosco. "It is amazing to be back as a co-owner. It is a full circle dream come true."

Once she finishes training her replacement in the coming weeks, Kristen Iosco will be leaving Almanac to focus full time on Tap 25. Briana Iosco already left her position as an assistant GM at Almanac to oversee the couple's taproom since it soft opened in February.

"This opportunity sort of just evolved and came about during some really trying times for people," said Briana Iosco. "We are thankful we were able to keep our jobs and pursue a dream. Now, here we are."

The women had announced last August that they, along with their dog Bentley, a black lab/Great Pyrenees mix, had purchased the taproom and hoped to have it reopened by the fall. But it wasn't until October that they were able to begin the demolition work, which they did themselves, to prep the space for a complete remodel.

They switched the bar from the left end of the taproom to the right end and installed all-new taps that connect to the cold storage area for the kegs of beer they carry. The women left the exposed wood beam ceiling but had a brand new wood floor put in with a grayish-blue hue.
"We gave it a nice little facelift," said Kristen Iosco.

The couple decided to keep the name of the taproom, located at 25 South Livermore Avenue, but had designer and illustrator Jenni Curtice, the wife of a longtime employee, create a new logo. It features an elongated tulip-style beer glass in front of a hop.

The reaction from former regulars of Tap 25 and new patrons alike has been immensely positive, said Briana Iosco, joking that there was "nothing soft" about their soft opening a few weeks prior to their official grand opening on February 24.

"Livermore came in hot," she said.

Added Kristen Iosco, "I feel great that Livermore is so happy and excited that we are open again. I couldn't be more thrilled that my wife and I just started something so beautiful, and that the town and community are accepting so well."

Kristen Iosco, 35, had moved from Wadsworth, Ohio to the Bay Area at age 19 to be with her biological father, who was in the Air Force. Briana Iosco, 32, grew up in East Stroudsburg, Pennsylvania, and moved to the Bay Area in 2014 from South Florida.

They live in Pleasant Hill, a short drive from Tap 25, which is situated in Livermore's historic Blacksmith Square. The brick building housing the taproom used to be an auto repair business, with people driving their cars into the space where customers now pull up a seat to enjoy a craft beer, noted Briana Iosco.

Behind it is Livermore's newly renovated Stockmen's Park, dedicated to U.S. military veterans and named in honor of the Stockmen's Rodeo Association that donated the land for it. New housing is going up nearby and a boutique hotel is to be built across the street from the taproom. 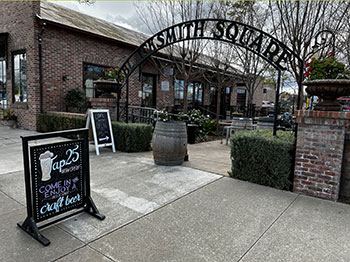 Blacksmith Square in downtown Livermore has been revitalized with businesses like Tap 25. Photo: Matthew S. Bajko

"Blacksmith Square has really come together. It is more connected to downtown so it won't be too isolated and there is plenty of free parking," said Briana Iosco.

The taproom can seat 42 people inside while accommodating upward of 100 people in the outdoor patio it shares with several stores and an eatery serving focaccia sandwiches, flatbread pizza, and wines by the glass. On weekends, bands will perform in the courtyard starting at 2 p.m.

The Iosco's are self-professed fans of lagers, with Kristen also partial to hazy IPAs while Briana gravitates to stouts. They always have 25 beers on tap, but the selection can change throughout the day as each keg is kicked.

At this time the Ioscos have no plans to brew their own beers, though it could be a possibility in the future, and they do not offer food other than bags of chips. They partner with food trucks to set up adjacent to their patio and welcome patrons to bring their own food with them.

"We wanted to solely focus on beer," said Kristen Iosco, adding that they also carry several ciders and sell cans of both to go. "We are making sure we have something to appease everyone. We are making sure to have a variety of IPAs, lagers, and pilsners, especially for Livermore's summer days."

They are also excited to partner with the local LGBTQ community on events and have already reached out to the organizers of Livermore's Pride festival on ways to collaborate. The Tri-Valley has a growing LGBTQ population that has received strong support from the larger community over the last several years.

"We are very excited, especially, to help bring more diversity to the Tri-Valley and to Livermore," said Kristen Iosco.

Most days the women bring Bentley with them to work, and their customers are also welcome to bring their own canine companions. Visitors from outside the area can plan an entire day around a stop at Tap 25 and several of the nearby wineries.

Many are also dog-friendly like the taproom, such as Page Mill Winery a short drive away in Livermore, or Ruby Hill Winery in Pleasanton. (Reservations can be made for both, though Ruby Hill does have tables set aside for walk-ins.)

Tap 25, for now, is currently closed Mondays and Tuesdays. Eventually, the Iosco's expect to be open seven days a week.