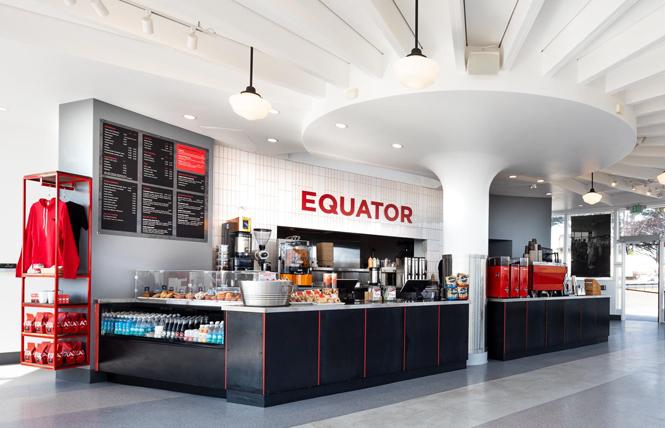 Bicycling over the Golden Gate Bridge on weekends from her Marin County home to check in on Equator Coffee's latest San Francisco location, Helen M. Russell marvels each time she sees the neon signage for the company she co-founded.

It is displayed above the bridge-facing entrance to the historic Round House Cafe, part of the visitor facilities to the iconic span overseen by the Golden Gate National Parks Conservancy. Equator took over management of the eatery with breathe-taking views last year and opened over Labor Day weekend.

"After 27 years of being in business, to go over the Golden Gate Bridge and to see our name, it is pretty spectacular," said Russell, the company's executive chair. "It is such an important crossroads; I just can't get over it."

Russell and her life partner, Brooke McDonnell, co-founded Equator as a coffee roaster and grew the San Rafael-based company into having its own locations in San Francisco and the North Bay. It is set to open its first Southern California outpost, in Culver City, this month.

In 2016, Equator became the first-ever LGBTQ-owned business to be named a Small Business of the Year in the U.S., as the Bay Area Reporter reported at the time. A year later it opened its first national park location inside the historic Gatehouse to Fort Mason Center in San Francisco's Marina district.

That led to conversations with officials at the parks conservancy, the nonprofit that raises money to support the sprawling Golden Gate National Recreation Area. The federal park consists of nearly 83,000 protected acres across San Mateo, San Francisco, and Marin counties.

Two of its main retail spaces, the cafe at the bridge and the Warming Hut in Crissy Field, are managed by the parks conservancy, which also operates the store inside the Welcome Center at the Golden Gate Bridge and one on Alcatraz Island. The profits they generate support the philanthropic group's work, so having to shutter them for most of 2020 due to the COVID-19 pandemic meant a hit to its finances.

"We had a pretty extended period where our parks stores were closed and so was Alcatraz," noted Christine Lehnertz, a lesbian who is the parks conservancy's president and CEO, as well as a former superintendent of the multi-county federal park site.

In looking at its plans to reopen the Round House site, the nonprofit decided to make a pivot and no longer operate it itself.

"We wanted to go with someone who could elevate the experience there," explained Lehnertz, noting that, "Equator Coffee's values align with ours."

Not only is it a locally-owned company founded and led by women and members of the LGBTQ community, Equator has been a leader in its industry in addressing how climate change is impacting coffee yields around the globe. It operates its own coffee farm in Panama and has worked to reduce its carbon emissions from its fields to its roasting facilities.

Fair trade certified, Equator is also a certified B Corporation that strives to be in the forefront on sustainable practices. It buys from coffee co-ops in order to invest in local communities, and its corporate ethos has resulted in a loyal customer base that includes Lehnertz.

"I don't think it hurt that Christine is a fan," said Russell about Equator being selected to operate the Round House Cafe, though she added they still conducted "a rigorous negotiation" over the terms of the lease. "It is something we are so proud of, to be operators there at what I see as the gateway to the world. It had 12 to 14 million visitors pre-COVID who are still making their way back."

For now, a main focus is catering to locals and, in particular, the legions of Bay Area residents who bike across the Golden Gate Bridge. Cyclists use the cafe location as a staging area for their rides, as did the coffee company for its New Year's Eve ride that saw 150 riders embark from the site on the Tour de Equator that included a catered lunch and champagne toast atop Mt. Tam.

"The cycling community is a big part of our history," said Russell, speaking by phone in late January during a break in her own bike ride outside of Palm Springs. "Cyclists gather in front of the Welcome Center and Round House to ride over the bridge but would never stop there. They didn't have gourmet coffee or the type of foods they wanted, like avocado toast, vegan and gluten free options, and those are all things we had."

Typical coffeehouse treats from doughnuts and muffins to croissants and cookies are available at the Round House in addition to various coffee and tea drinks. Customers can also purchase heartier fare, such as avocado toast ($9, plus $2.75 to add an egg), a Cobb salad ($13) and a vegan BLAT ($12) made with tempeh bacon, lettuce, avocado, tomato, and vegan mayo. 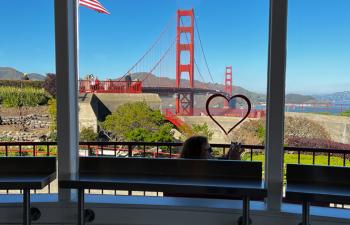 The view from inside Equator Coffee looks out on the Golden Gate Bridge. Photo by Matthew S. Bajko

"This is a whole different ballgame," said Russell of the menu available.

And it comes with spectacular views that can be enjoyed from several benches situated on an outside walkway the wraps around the cafe. The vista stretches from the orange span on the left to the former island prison on the right, where Equator is in talks with the parks conservancy about providing at some point a coffee service near the gift shop.

"I love that a women founded, LGBT-certified company is operating at that location," said Russell, "at one of the top locations in the world. It just gives me goose bumps."

Calling it a "pinnacle" in her career, Russell told the B.A.R. that weekends are the busiest for the Round House Cafe while sales throughout the week have been "steady." As COVID cases decline and tourists return to the Bay Area, she expects business to continue to increase.

"I think this year we will have a very good year," she predicted.

The parks conservancy also expects to see a pick up in visitors this year at both its Welcome Center at the bridge and Warming Hut a short hike down to the shoreline of the bay. Pre-pandemic it changed up the operations at the site, doing away with a food counter to instead stock various pre-packaged snacks from local producers.

It continues to offer hot beverages made to order, using Equator beans for the coffee.

"We have been working with them ever since we reopened in March 2021," said Robert Lieber, a gay man who is the parks conservancy's vice president for interpretive sales, of the store situated between the northern edge of Crissy Field and the historic Fort Point under the southern terminus of the Golden Gate Bridge.

One of the more popular offerings is the Crissy Mocha ($3.50), a blend of half coffee and half hot chocolate. It has been "a big hit," said Lieber. "We do the best mocha."

The cafe at the Warming Hut wasn't working out financially, explained Lieber, so he and his staff decided to change its operational focus. Most of the food items come from local businesses owned by women or immigrants.

"It wasn't profitable for us. We needed to make a change," said Lieber, who joined the nonprofit in 1996 as a product developer. "Part of what we do is generate income for the projects we do. We couldn't support a program that was losing money, so we decided to reframe what the Warming Hut is doing."

It is still up in the air if they will add a similar drinks program at Alcatraz, said Lieber. And due to bringing in Equator at the bridge cafe space, he said the parks conservancy plans to transform the nearby vacant Bridge Cafe space into an "interpretative" space to for visitors. 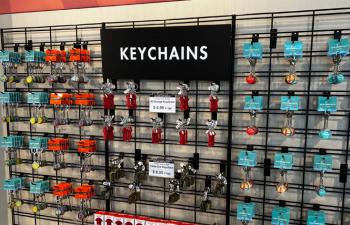 Keychains and other items can be purchased at the Welcome Center. Photo: Matthew S. Bajko

Welcome Center
Across the plaza from it is the Welcome Center, which is stocked with numerous items the parks conservancy creates in-house. From books about the local national parks and San Francisco-themed pins and magnets, it is chock-a-block with unique gift items and educational materials for purchase.

"We have over 1,500 unique items we have designed and developed ourselves," said Lieber, whose job includes traveling the globe to ensure its manufacturing partners, many of which are family-owned, meet its standards in how they operate and treat their workers.

One of its best-selling items are the fog globes ($34.95) it created a decade ago. Inspired by snow globes, the fog globes sport hand-carved designs of the bridge, Alcatraz, or the redwoods of Muir Woods. How, or where, its gets the fog for them is a secret Lieber wouldn't divulge.

"It was a yearslong project to get the fog right," he did allow. "To do fog is very unique."

What sparked its in-house efforts, said Lieber, was the success of images for the different park sites that were based on posters created by the Works Progress Administration in the 1930s. They adorn magnets, keychain, T-shirts, mugs, and other items for sale.

"What really put us on the map were the park images," said Lieber. "It was when we really understood we could develop a retail program that could generate income that could support the parks."

With all of its stores, the parks conservancy aims to educate visitors about the history of the numerous federal parks sites in the Bay Area, as well the flora and fauna that can be found in the local parks, explained Lieber. It is why it carries more than 75 books, including ones geared for children, about the different parks.

"We have a terrific team who really know what the parks are about," said Lieber, saying of its store sites, "you can learn a lot about [the area's history and natural resources] and how to enjoy the park."

The parks conservancy has been marking its 40th anniversary and is gearing up to mark the GGNRA's golden anniversary when it turns 50 later this year. With the opening this spring of the new Presidio Tunnel Tops park space built atop the Presidio Parkway Tunnels, with new trails connecting to the Warming Hut and Golden Gate Bridge entryway, there will likely be an influx of visitors and customers to both.

"People can go into our interpretative retail stores and get a wonderful memory of their visit," said Lehnertz.

To see some of the parks conservancy items for sale, visit its online store.