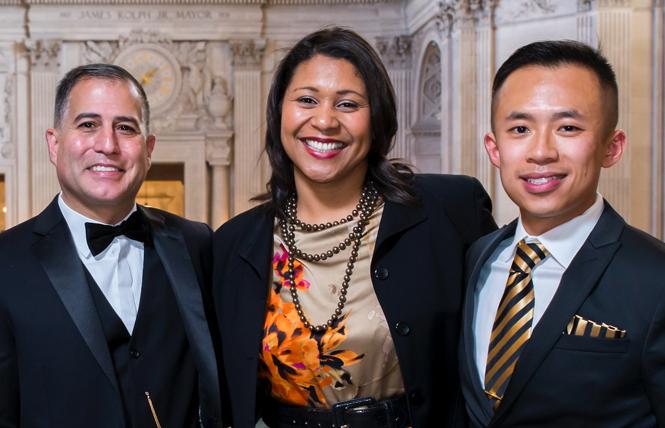 At the start of the COVID-19 pandemic last year photographic homages to beloved movies and television shows started popping up on the social media feeds of brand and communication strategist Jack Song. Featured in the pop culture tributes alongside Song was his Chihuahua Terrier rescue Goldie.

A spoof of the hit Netflix docu-series "The Tiger King" had Goldie adorned in a lion outfit. Another depicted Goldie as the alien creature from "E.T." camouflaged as a ghost in the bike basket of his human child protector Elliott, played by Song.

They recreated the famous pottery-making scene from "Ghost" starring the late Patrick Swayze and Demi Moore. And the duo portrayed numerous Disney characters, including Aladdin (Song) and his monkey sidekick Abu (Goldie) and the title canine characters of "Lady and the Tramp" sharing a candlelit dinner of spaghetti and meatballs.

"I capture people's attention with my storytelling. With these photoshoots, I wanted to delight people during a time of uncertainty," Song, 38, told the Bay Area Reporter. "We all needed some healthy distractions. Of equal importance, this was my love letter to my buddy, Goldie."

It was a fitting pandemic pastime for Song, who grew up in Southern California not far from Hollywood and has served on the San Francisco Film Commission since January 18, 2019 after Mayor London Breed appointed him. Song, who identifies as queer, is currently the oversight body's sole LGBTQ member.

"I wanted to do something creative to get my energy out there, stay focused and positive because it was tough times for all," said Song about his quarantine photoshoot series. "I realized people were entertained by it." 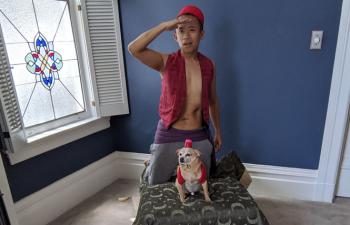 Jack Song and his dog Goldie dressed up as Aladdin and Abu, respectively, part of a photo series depicting the pair as characters from movies and TV shows they staged during the COVID-19 pandemic. Photo: Courtesy Jack Song

Goldie proved to be a "good sport" about the productions, said Song, and was rewarded with treats. Their neighborhood pet store The Animal House in the Lower Haight benefited, as any costumes or pet props needed for the photos Song purchased there.

"The owner of the shop and I exchanged ideas. She would sometimes provide art direction or suggest what costume to get. It became just fun," said Song, married to Gregory Stuart Flores, an assistant district attorney.

At age 8 Song and his family emigrated from Taiwan in the early 1990s, settling in Los Angeles. He earned a B.A. in political science and public policy from UC Berkeley in 2004.

On campus Song promoted Taiwanese American director Justin Lin's "Better Luck Tomorrow," a 2003 indie film about striving Asian and Pacific Islander high school students. In it, Song saw himself and realized change in the film industry could be achieved behind the camera.

"Seeing my people on screen had a huge impact on me," said Song. "That was an aha moment for me. I want to be a part of that change, so no more stereotypical racist portrayal of voices that do not have representation in the room."

After graduating Song became director of marketing and media relations at David Magdael & Associates Inc., an entertainment and public relations firm in Los Angeles. He credits as a mentor the firm's president/CEO, David Carlyle Magdael, a gay Filipino who has long advocated for more diversity on screen.

"He always said you got to represent," said Song.

Some of the movies Song helped publicize were the LGBQTI films "Colma: The Musical" and "Do I Sound Gay" and Asian American-featured films "Harold & Kumar Go To White Castle" and "Kubo & the Two Strings." He relocated to San Francisco in 2009 after City Attorney Dennis Herrera hired him as a spokesperson the same day Song watched a special screening of the Oscar-winning biopic "Milk" about the late gay San Francisco supervisor Harvey Milk.

He left in early 2014 to focus on marketing tech companies but stayed involved in politics through the Alice B. Toklas LGBTQ Democratic Club, now serving as its programs co-chair. When an opening came up on the film commission, Song jumped at the chance to again engage with the film industry and promote San Francisco as an ideal location for film shoots, television shows and commercials.

"I understand the film industry both on the production side and talent side. I want to be able to share my knowledge with Film SF," said Song, using the official name for the film permitting office under the auspices of the Mayor's Office of Economic & Workforce Development. "I think another mission is that yes, San Francisco is a funky town but also absolutely gorgeous. San Francisco's got soul, and I want to be able to help promote that and be active in promoting filming in San Francisco. It does bring in jobs; it does bring in visitors."

The COVID pandemic initially brought filming in the city to a standstill. After safety protocols were put in place for film shoots, permits steadily increased. Between June and September of this year, 93 permits totaling 177 shoot days were granted; in 2020 there 42 permits and 90 shoot days. Yet compared to pre-pandemic summers, permits were still down 26% and shoot days 15%.

Nonetheless, it is still a significant boost for the local economy. The latest Marvel blockbuster featuring its first Asian superhero, "Shang-Chi and the Legend of the Ten Rings" which opened last week, shot for seven days in San Francisco last October. The first major production to do so during the health crisis, the production spent an estimated $5 to $7 million on the weeklong shot.

"As I said, blockbusters that shoot here, even for a short amount of time, can inject significant dollars into our local economy," Susannah Greason Robbins, Film SF's executive director, told the B.A.R.

Robbins, a straight ally, is bullish about the return of the local film economy. In addition to the city's beauty, San Francisco offers a rebate program as an incentive, noted Robbins, that results in $14.03 spent locally between purchases and wages for every dollar rebated.

"I do feel optimistic. Probably by spring or summer 2022 we will be close to normal levels," predicted Robbins. "I do think we are just going to see an increase in productions."

Robbins also hopes more local businesses will sign up for Film SF's vendor discount program and offer deals to lure workers on the various shoots to patronize their stores, restaurants, or services.

"We want to encourage productions to shop locally," she said. "It is going to definitely bring them more foot traffic into their businesses."

Marvel has based a number of its movies in San Francisco and will be shooting scenes in the city for two of its upcoming slates, sequels of its "Ant-Man" and "Venom" movies. Song took particular pride in seeing "Shang-Chi" set in the city even if mostly filmed on a soundstage in Australia.

"Now to have an Asian superhero in a Marvel film that is nuts," he said. "And for the lead actors to all be Asian, and it is not a foreign film, that is crazy, that is progress, and we are not done yet. There is more to be done."

Song and Goldie's photo parodies could be returning again. His new job as vice president of Gravitate PR gives him less time to focus on them, but he may post new ones on weekends and holidays.

His aim is to turn the series into a coffee table book or calendar benefiting a local LGBTQ nonprofit. If nothing else, it was a bonding experience with Goldie, now nearly 16 years old, Song will always treasure.

"He helped me through the pandemic and kept me out of trouble, I feel," said Song. "By trouble I mean keeping me in a positive mood as much as we can."