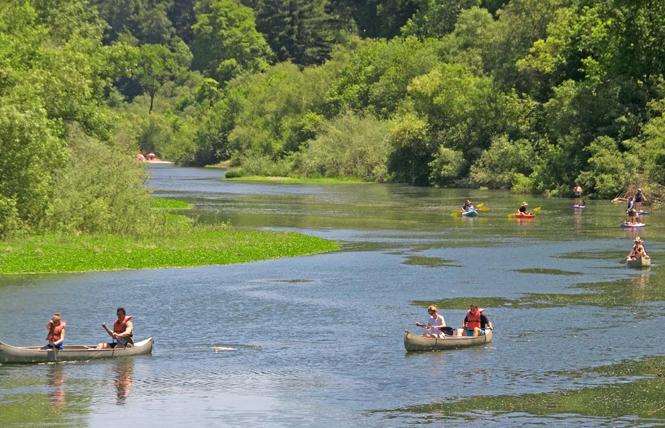 The Russian River area is known for being gay-friendly and has outdoor recreational activities such as kayaking and canoeing. Photo: Courtesy Sonomacounty.com

The summer season is slowly revving up in the gay-friendly Russian River resort area centered around the town of Guerneville, which is marking its 150th anniversary this year. But vacationers will find a drastically different environment from years past as businesses institute new procedures to keep guests safe.

Most of the local businesses that cater to tourists shuttered in mid-March when the shelter-in-place orders were instituted to help contain the spread of the novel coronavirus. Over recent weeks Sonoma County officials have been allowing more shops, wineries, and restaurants to open their doors while adhering to new safety protocols to keep both their customers and staff socially distant.

The ever-popular Johnson's Beach is preparing to welcome back beachgoers next Friday, June 19, for the first time this season ahead of the Father's Day holiday. But it will no longer be able to accommodate the upward of 1,000 people per day it normally sees in the summer and will be chalking out rows of beach spots available only by advance reservation. Those closest to the river will cost $30, middle row spots will run $20, and those farther back will cost $10; all come with an umbrella.

"We can't create a socially distant environment that can accommodate that many people," owner Dan Poirier told the Bay Area Reporter Tuesday. "I will know by Thursday how many people we will be able to let in."

This Friday, June 12, winery tasting rooms in Sonoma County will be allowed to open without the need to also be serving food. Next to open will be hotels, resorts, and private vacation rentals, which county leaders could give the go-ahead to do so as early as 5 p.m. Friday, June 19, according to an email sent late Tuesday night by Sonoma County Supervisor Lynda Hopkins, whose District 5 includes the Russian River area.

The opening date for tourist accommodations has been in flux and remains uncertain. Earlier Tuesday Hopkins had told the B.A.R. that county officials were looking at Monday, June 22, as the potential date. That was then moved up to 12:01 a.m. June 20, and the even earlier opening time next Friday evening is now being considered at the request of the county's hospitality industry, Hopkins told the B.A.R. Wednesday.

A decision will not be made until early next week. Getting the hotels and other lodging open again is contingent on the county seeing new cases of the coronavirus remain relatively flat.

"Assuming we don't have a spike before then," Hopkins had told the B.A.R. June 9.

As of Wednesday morning, the county had reported a total of 671 cases, seven of which were new within the last 24 hours, a drop from the 11 news cases seen during the prior 24-hour period. The county has seen just four deaths and has so far conducted 32,125 tests for the virus.

But Karin Moss, executive director of the Russian River Chamber of Commerce, stressed that nothing is yet set in stone. She said many hospitality industry leaders are waiting for a new update from Governor Gavin Newsom this Friday, June 12, to see if they will be allowed to open ahead of the busy Fourth of July weekend.

"All of this is still fluid. Nobody really knows yet," Moss said Tuesday. "Everyone is in the same wait-and-see mode."

Even if the lodging sector is allowed to come back on line later this month, many properties will be doing so at reduced capacity and keeping rooms vacant at least 24 hours before checking in new guests. Overseas visitors and those from outside California are unlikely to return this summer in sizable numbers, with most guests expected to live in the Bay Area and Northern California who are looking to "nearcation" this year.

"We are bracing for a very challenging summer economically, especially in our small rural towns like Guerneville that rely on tourism to support the local economies," Hopkins had told the B.A.R. during a phone interview in mid-May when it was clear many of the business operating restrictions would not be lifted in time for Memorial Day weekend, the unofficial start to the summer vacation season.

Hopkins acknowledged the uncertainty for business owners has made it difficult for them to plan in terms of summer staffing and what to tell those with reservations.

"It is kind of frustrating," said Hopkins, who has being sending out emails updating her constituents about the latest rules at least twice a week.

Poirier isn't waiting for the official word on reopening his resort's campsite, which he now hopes to be able to do Friday, June 26, though its 10 cabins will not be available until mid-July. He is trying to hire staff and change how the resort will handle the check-in process.

He is hopeful that this Friday will mark the first time in months he hasn't had to call people with upcoming reservations that they need to be canceled.

"Our availability in July is pretty low," said Poirier, as people booked camping spots back in February. "We are only about a month behind schedule in terms of opening. With July and August, I think we will have a decent season."

Michael Preaseau, who has owned The Woods Resort since 2004, has been renting out some of his 13 rooms to Caltrans employees working on a project out by the ocean in Bodega Bay. He is eager, though, to welcome back tourists and hopes to do so by early July.

"I anticipate it will be a booming summer," he said. "We are just getting a lot of calls. We are booking up solid."

Those looking to make reservations for later this summer may find themselves out of luck, as several resort owners told the B.A.R. this week that they remain booked for the Fourth of July and the period of late July into early August when the Lazy Bear weekend is normally held. Even though the event has been officially canceled this year, most people have maintained their room reservations for that week.

"We've been booked for the Fourth of July for a year," said Lynette McLean, who with her husband, Ken, has owned the Highlands Resort for 25 years. "We've been fielding a few calls from people who want to pre-book."

The uncertainty about knowing when they can reopen "is really confusing. That is the only way to really express it," added McLean. "Maybe I will open June 22, probably. I hope to be open for July 4."

Like most resort and hotel owners, the McLeans have added a special page on their website laying out the new rules, check-in process, and cleaning protocols they will be putting in place when they do reopen. They bought a desk to use for outside check-ins and are adding a cover to it to protect the staff and guests.

They cut in half the 10 campsites they will be renting out so there is enough space between the remaining five. For their 14 guest rooms, one fewer than in previous years, they will not be allowing single-night stays for the time being due to the extra cleaning involved, for which McLean said guests will not be charged extra.

"We will have a two-night minimum through the summer on both weekdays and weekends," she said.

Nonetheless, she hopes people in the surrounding area will come to visit.

"If you are tired of being at your place, come up and shelter at our place," said McLean. "It is going to be different than the sort of party town it is known for. You are not going to be able to do a lot of the types of things people came to depend on, like big drag shows or karaoke at a crowded bar. But there will be other stuff going on to do that will be cool and different. It is a great time to come up and get outdoors, go hiking in the hills." 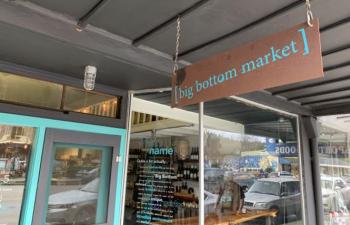 Having reopened Big Bottom Market on Main Street in Guerneville for takeout orders in May, co-owner Michael Volpatt told the B.A.R. he now expects to welcome customers back inside the business starting Thursday. The market has also started supplying picnic baskets and food-to-go items to several wineries that recently reopened their tasting rooms, such as Iron Horse and Lambert Bridge, and is in talks with several more.

"It is feeling like people are starting to go out again," Volpatt, a gay man, said this week.

To accommodate more outdoor seating, the market teamed with two local stores, King's Sport and Tackle and the Guerneville 5 & 10, to put tables on the sidewalk in from of their establishments.

"We have a lot more outdoor seating now. People love it," Volpatt said. "I am really energized by how open all the other business owners have been to make sure we can all open in a way that is safe for our community."

Having bounced back from the floods during the winter of 2019, Russian River leaders were expecting a strong summer season this year. They remain hopeful about the coming months and are already looking toward the fall harvest season to recoup some of the losses from the spring shutdown.

"I would say now, more than ever, we are poised to have a really successful summer," said the chamber's Moss, adding, "It is sincerely my hope in October we can do some celebratory event here for the 150th anniversary of Guerneville." 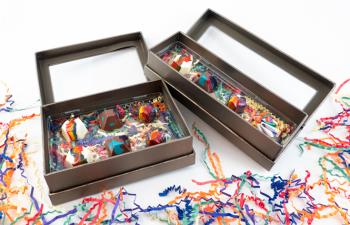 Noe Valley-based BearPhoenix Chocolates has a special Pride Month flight of white, milk, and dark chocolate bonbons that come in three ($10) or six ($20) per box. The trio of flavors are called "Fig and Fire," a dark chocolate with fig ganache and spicy Habanero caramel mix, "Not your Mother's Mimosa," a white chocolate with orange and Cointreau light caramel layered with a champagne ganache, and "Diversity," a milk chocolate with a vanilla mocha ganache mixed with hazelnut pieces and layered with a raspberry cream.

Proprietor Jeremy Allen, who operates the small batch confectionery out of the home he shares with his partner, will deliver orders throughout the city or arrange to have customers stop by for pickup. To order online, visit https://bearphoenix.com/pride.

For Father's Day Michael's Chocolates, launched by Michael Benner and his husband Curtis Wallis, is offering a specially priced Whiskey Lover's Collection featuring two unique bonbon flavors. One is a 61% dark chocolate made with San Francisco's own Old Potrero Rye Whiskey, and the other is a mix of bourbon, caramel, and pecan nut butter.

Boxes come sized six, 12, or 24 pieces ($14 to $58) and can be ordered online at https://www.michaelschocolates.com/store/p92/Whiskey_Lover%27s_Collection.html.