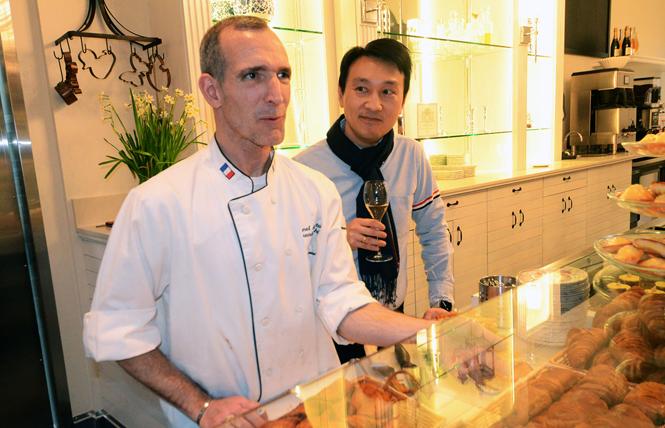 A new gay-owned French tea salon is bringing a touch of Parisian flair to San Francisco's Polk Gulch neighborhood just blocks from the museums and theaters situated in the city's Civic Center district. A highlight of Maison Danel, set to open its doors February 18 at 1030 Polk Street, will be its daily afternoon tea service.

Husbands David and Danel de Betelu, who also own the French-inspired Baker Street Bistro in Cow Hollow, have spent close to a decade trying to open their teahouse and French bakery. After a five-year search they signed the lease for three adjacent storefronts in 2017, but then faced delays in seeing the existing businesses vacate their spaces and navigating the city's permitting process in order to receive the signoffs they needed to open.

Showing off the renovated space, which sports an entwined D logo symbolizing their first names and marriage, the couple told the Bay Area Reporter they are excited to be opening a business in one of the city's historic LGBT neighborhoods. Few LGBT-owned businesses remain along Polk Street, as the center of the city's LGBT community shifted to the Castro district in the 1970s.

"The rent here is reasonable and we are excited to be in a revitalizing neighborhood," said David de Betelu, who formerly worked as a branding specialist for national chains like Target, Old Navy, and Sephora. "We also thought it was great that we are a local gay-owned business in Lower Polk. To be part of this revitalization of this historic neighborhood is a great thing."

Across town at Fearless Coffee on Second Street in the city's South of Market district, a gay proprietor has "chaga charged" the cafe's tea, coffee, and food offerings by adding chaga mushrooms to the menu. The Inonotus obliquus fungus, commonly known as chaga, grows on birch trees throughout the Northern Hemisphere and is hailed for its anti-inflammatory and immune-boosting properties. 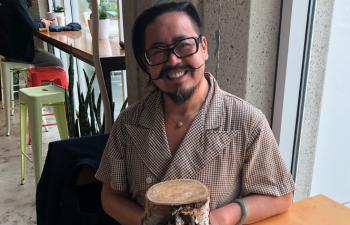 After discovering chaga through friends while living in Alaska four years ago, Gavin Escolar, 44, launched The Chaga Company upon returning to San Francisco in 2017 at that year's annual Fungus Fair. He sold out and soon started selling his chaga mushroom elixirs, tinctures, and infused chocolates at farmer's markets around the Bay Area, including the popular Saturday markets at San Francisco's Ferry Building.

"I don't forage myself. I work with people who have been doing this for millennia. Also, they do sustainable harvesting, which is really important to me," said Escolar. "I met with mushroom experts to make it more faster and efficient for the body to absorb. The Alaskans boil it down to a tea but it tastes like ass. We broke it down to get the antioxidants but without the taste."

Through a teammate on the gay Fog rugby team, Escolar met Jeff Handy, who opened Fearless Coffee eight years ago at 303 Second Street. The two hit it off, and in January, Escolar took over day-to-day management of the cafe.

In addition to using it as a place to showcase his chaga mushroom offerings, Escolar spruced up the decor by adding live plants and artwork from fellow farmers market vendors he had befriended. Due to its location on the edge of the business district, Fearless is only open weekdays from 7 a.m. to 4 p.m., so Escolar is hoping to partner with other independent-owned coffeehouses and cafes around the city also interested in "chaga charging" their menus.

A longtime jewelry maker, Escolar went to Alaska at the invitation of a friend who owned a gold mine there.

"I did pan for gold. It was cute the first eight months. But I realized I am a true San Franciscan," recalled Escolar, who spent time in Juneau, Anchorage, and Fairbanks.

It was there he first was introduced to chaga mushrooms. He had been taking pain pills to cope with injuries he had suffered from playing rugby, and friends in Fairbanks suggested he instead try chaga.

"After two weeks my pain went from unbearable to 75% manageable. I now take it everyday," Escolar told the B.A.R. over a cup of his turmeric spice with chaga tea ($4), which is a golden color and has a bit of an earthy taste and a hint of ginger.

To spread the word about his products in the Bay Area, Escolar hosted garden and mushroom tea parties as well as dinners at the Equinox sports club on Market Street that also featured local artists. At Fearless, customers can add a chaga shot for $1 to their coffee orders — taste-wise it is barely discernable and pairs well with the notes of the coffee beans.

Escolar also worked with the cooks at Handy's Red Dog Restaurant & Bar located in the same office complex on Second Street to infuse chaga into such things as empanadas ($3), biscotti ($2) and chocolate chip cookies ($3) that people can purchase at Fearless. Also on sale are his gold-dusted chocolate bars ($10 for a 2 oz. package) that Escolar makes with a chocolatier he hired. Each Friday they make a batch of 400 to 500 bars at the food nonprofit La Cocina's kitchen that Escolar then hand coats with edible gold.

"This is truly something I feel helps out people, whether it is their mind, body, or soul," said Escolar, who credits his chaga diet for his losing 42 pounds and feeling more energetic.

For more information about The Chaga Company and to order its products online, visit its website at https://www.thechagaco.com/ 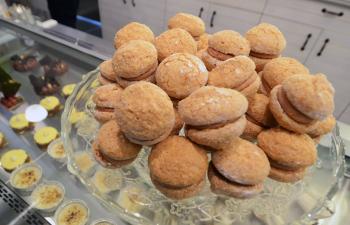 Macaroons and multiple creamy desserts are some of the offerings at Maison Danel. Photo: Rick Gerharter

Teatime via Europe
Inspired by the tea salons they visited in Paris and Vienna, David and Danel de Betelu had dreamed of one day providing a similar "elegant and elevated experience" in San Francisco since moving to town in 2008.

"We have good pastries and places to go for high tea but they are all in hotels. Combining French pastries with afternoon tea doesn't really exist here in San Francisco," noted David de Betelu.

They will be providing the British-style of afternoon tea Americans are most familiar with, but instead of scones there will be croissants, explained Danel de Betelu. They have hired Adrien Chabot, an acclaimed chef from Paris, as the head chef of the new tea salon and pastry shop.

"We want to be a destination for good French pastries and tea service," said David de Betelu.

The couple initially met in New York City on the eve of Bastille Day, July 14, 2007. Danel de Betelu had moved to the city in 2002 and was a chef at a French restaurant, which was slammed due to the French holiday, so their first dinner date was at midnight July 15.

"It was love at first sight," recalled David de Betelu, 41, who grew up in Taiwan and moved to the U.S. with his family when he was 10.

Danel de Betelu, 46, grew up in Biarritz, France and began his cooking career in his hometown where he opened his first restaurant in 1999. It is also where the couple married in 2015 and their wedding inspired the decor of their patisserie (which refers to sweet cakes that are refrigerated like eclairs and puff pastries), viennoiserie (for baked goods like croissants and apple turnovers) and salon de thé, or tea salon.

A crystal chandelier hangs over the barista station, while the seating area sports a tiled floor and exposed brick walls. The build out of the space took 12 months.

"We are really trying to build our dream place," said David de Betelu, "that combines my love of tea and Danel's French sensibilities."

The eatery's name translates to "House of Danel" and conveys not only the elegant experience they are aiming to provide patrons but also signals the business is "a brand and not just a bakery," explained David de Betelu, as they would like to have multiple locations of their tea salon.

"Our landlord has a building in the Castro he asked us about also leasing. But we said let's build this here first," said David de Betelu, adding that the couple's "goal is to be the best French patisserie in the city and be able to attract people from across the city and the Bay Area."

The afternoon tea service will start at 2:30 and run through closing. The Classique ($40) includes a selection of pastries, finger sandwiches, and a pot of tea. The Eugenie ($60) adds a half bottle of cremant champagne, while the Napoleon ($150) also includes a 1 oz. caviar service.

For more information about the menu and pricing, or to make a reservation, visit www.maisondanel.com