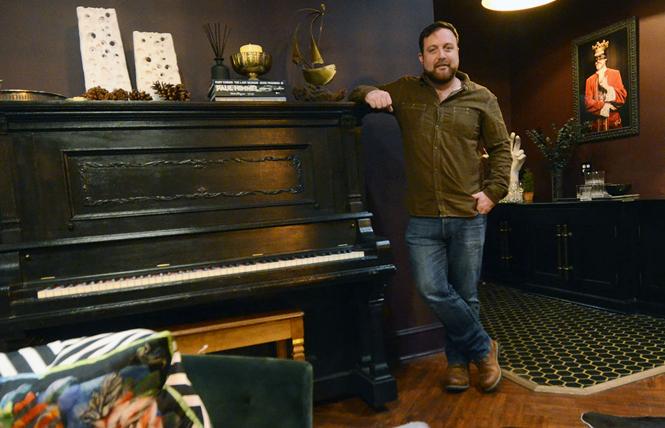 Paul Miller, co-owner of The Academy, shows off the new Club Room at the social club. Photo: Rick Gerharter

As it approaches its third anniversary, an LGBT social club in San Francisco's Castro district is expanding, opening the doors to an increase in membership and more offerings for non-club members.

Known as The Academy, gay co-owners and friends Nate Bourg and Paul Miller opened the social club May 31, 2017 in a portion of the building located at 2166 Market Street, a short walk from the Church Muni Metro Station. Their aim was to provide an outlet where LGBT people could form friendships outside a bar or nightclub environment.

Their concept proved successful, with paid memberships surpassing 350 people by the end of 2019. In late summer they took over the lease for the building's second floor after insurer State Farm vacated offices it had there. The Academy now occupies the entire property, and an official grand opening of the new space is being planned for early February.

Over the last several months they have worked with Miller's father-in-law contractor, Mathew Ringhofer, and local designer Scott McMahan of Scott Robert Design to remodel the roughly 1,000 square foot area to match the club's gothic Victorian aesthetic. It now sports chandeliers, settees, a "secret room" dubbed the Reflection Room, another called the Boardroom, and a purple paint color known as "Wicked."

"We've completely redone the upstairs," said Miller as he showed off the front parlor area — christened the Club Room with windows that look out onto Market Street — to the Bay Area Reporter this month. "We took some walls down to open the space up and redid the bathrooms."

The second floor has its own music theme — jazz — and will have a rotating art installation. For the grand opening photos of local community members used to create a card deck have been mounted on the walls throughout the various rooms.

In the Boardroom will be a headdress donated by Sister Roma, a member of the charitable drag nun group the Sisters of Perpetual Indulgence. In November, The Academy inducted Roma as its inaugural Legends member, an initiative born out of the club's desire to pass on the history of the local LGBT community.

"We want to have a Legends Archive and are asking notable San Franciscans to donate items to it. We will be inducting one person a year into our Legends Hall of Fame," said Miller. "Historians remember the people we tell them to remember. We hope to say this person is important; it is not just about Harvey Milk."

But Milk is still honored. A display of newspaper clippings about Milk, the city's first openly gay elected supervisor who was assassinated 11 months after taking office in 1978, will be installed on the second floor.

"We don't want it to feel like a museum but incorporate it into the décor," explained Miller.

With the added space The Academy plans to bring on upward of 70 new members by July. Next month, its annual tiered membership fees will increase by $25 and will range from $125 to $175, though it does offer financial assistance to those interested in becoming a member but who have limited means.

"I think people like having a community space where they can get together and interact," said Miller. "I think it serves a need in a time and a place where people are realizing the value of building a community for yourself."

In an emailed reply, Bourg told the B.A.R. there are myriad opportunities for how the club can utilize the additional floor in the building. With roughly 3,000 square feet of space at its disposal, the club can now host simultaneous events in the different spaces and match its various offerings, from book club gatherings and discussion groups to birthday parties and its "Academy Homeroom" classes open to the public, to the most appropriate room in the club.

"It has been very gratifying to see the growth of The Academy since we opened two years ago (three years in May!). When the opportunity came up to take over the top floor, we couldn't turn it down," wrote Bourg. "We never want the space to feel crowded, and having the whole building allows us to ensure that level of comfort and stay true to who we are."

Since it opened, the social club has instituted a number of changes, such as revamping the building's basement into a speakeasy-type environment and moving away from selling furnishings as was initially planned. Because they occupy a former retail space — Klotz Watches & Clocks had operated there but closed in 2015, while decades ago the site was home to the notorious gay bar The Balcony — Bourg and Miller lease out a sidewalk fronting glass-enclosed space as a barbershop.

Last April, in response to complaints about the lack of a fuller retail component, the co-owners obtained a change in their zoning to be classified as a general use establishment. They also were granted limited use of the property's rear yard space, but have yet to take full advantage of it as they work on getting final approvals from the city's various departments.

"Our hope is that the process gets fully wrapped up within the next two months," Bourg told the B.A.R. "It's less bureaucratic and more related to the quirks of old buildings, and making sure that all of the T's are crossed with the various departments who have to sign off."

Last year, The Academy launched its Academy Homeroom series of classes as a way to invite in the public to utilize the space and perhaps then become members. This Friday, January 10, it is presenting a health class and on January 23 is hosting a figure drawing class, each of which cost $15 for non-members of the club.

"One of our focuses is not to be the social club on the hill but a community resource," said Miller in explaining the idea behind opening up the classes to the public.

As for the possibility of buying the property someday now that they are the lone tenant, Miller told the B.A.R. that their landlord, a gay man he said lives in Europe but has never met, isn't interested in selling it at the moment.

One idea they are pursuing, said Miller, is creating their own version of the board game "Clue" using The Academy's various rooms.

"Maybe by Christmas this year,'" he said.

To learn more about the social club and how to become a member, or to rent out is various rooms for private events, visit its website at https://academy-sf.com/

CA utilities lag on LGBT contracts
Five years after California enacted a law calling on the state's public utilities to increase their contracting with LGBT-owned companies, the initiative has produced lackluster results, according to a new report.

The 2019 Supplier Diversity Report Card, produced by the Greenlining Institute and released Wednesday, January 8, concluded that the public utility companies' "spending on LGBT-owned suppliers saw some improvement, but still has a long way to go."

In an interview ahead of the report's release, co-author Paul Goodman told the B.A.R. that one reason might be the lack of LGBT employees at the utilities who can champion the issue of ensuring certified LGBT-owned businesses are included in their company's diversity contracting pool.

"Utilities are not hiring enough LGBT employees internally; that is a huge factor," said Goodman, Greenlining's technology equity director and board president of the Conference of California Public Utility Counsel. "If you have folks on your procurement team who are LGBT, they may be a little bit more aware we need to do more outreach to LGBT contractors."

One issue deflating the contracting statistics for LGBT businesses in the report, which are based on 2018 spending figures, is that utilities may have contracts with businesses that aren't certified as being LGBT-owned, said Goodman. Also, if a business falls under two diversity categories, such as African American and LGBT, it can only report the contract under one category, not both.

It is expected that there won't be significant improvements in the LGBT contracts category until after 2021, as that year the California Public Utilities Commission should be setting target goals for procurement from LGBT-owned businesses for the utility companies to meet.

"The lack of existing target goals may be responsible for the wide variance in LGBT spending from company to company; accordingly, Greenlining has applied a somewhat lenient grading metric in this category," explains the advocacy organization in its report. "However, the outstanding performance of a few companies shows the potential of a strong commitment to LGBT contracting and should guide the CPUC in setting target goals."

LGBT contracting was weak across the board for the various utility categories, according to the report. It noted that the energy utilities' spending percentage on LGBT businesses "was the low point in an otherwise strong performance on supplier diversity."

The report concluded that the phone and cable industry's LGBT spending "was extremely disappointing, with only two companies reporting more than zero spending on contracts with LGBT businesses." They were Cox ($0.7 million) and AT&T California ($0.06 million).

"The cable companies really need to step up their game," said Goodman.

AT&T Wireless and Verizon Wireless both earned C grades, while Sprint received an F. The three companies' LGBT spending was among the lowest across all industries, the report found, while T-Mobile was one of the best, earning the company an A grade on LGBT contracting despite its modest percentage of spending 0.51% with such companies.

The cellphone provider, according to the report, "has historically built ties with the LGBT community, spent almost $18 million with LGBT companies, more than any other company, almost twice the spending of the energy industry ($9.2 million) and water industry ($10.4 million), and over 25 times the spending of the phone and cable industry..."

Suburban Water Systems reported the second highest dollar spending among all the companies and the highest spending percentage of any company, found the report. Meanwhile, noted the report, Liberty Utilities' LGBT spending dropped precipitously from 9.28% in 2017 to zero percent in 2018.

The report is seen as a way to urge the companies to increase their diversity contracts across the board. It was not shared with any of the utility companies ahead of its release.

"We are not asking all of these groups to share the same pie; we want more pie for everybody," explained Goodman. "We want utilities to be really serious about these programs."

New laws enacted January 1, which the Greenlining Institute helped pass in 2019, call for the state's insurance providers and hospitals to increase their contracts with businesses owned by LGBT individuals, women, people with disabilities and other minorities.

To download a copy of the report about the state's utility companies, visit https://greenlining.org/publications/2020/2019-supplier-diversity-report-card/