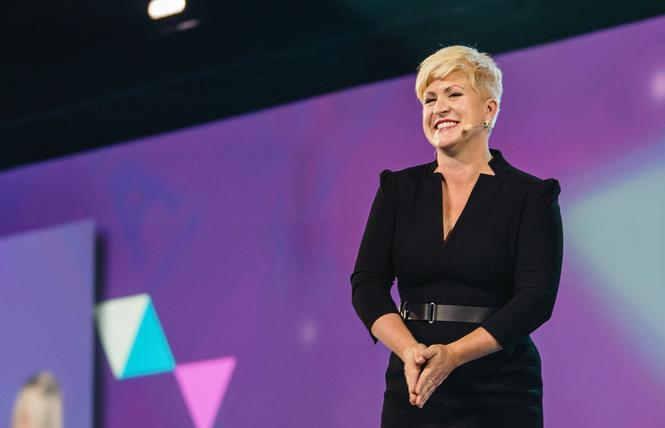 A year after Erin Uritus took over as CEO of Out & Equal Workplace Advocates, she is turning the nonprofit's attention toward the 13 states that comprise the southern United States and lack robust protections for LGBTQ workers, if they have any at all.

The agency is rolling out a Southern States Initiative this year and will be hosting two forums, one in Dallas and another in Atlanta, in July.

The agency, which advocates for LGBT-inclusive workplaces, is also strengthening its international focus. It has targeted three countries — India, China, and Brazil — to focus on, as each serves as a hub in their regions for multinational companies and has significant local LGBT communities.

"Everybody knows it is good for business to be inclusive," said Uritus in a recent phone interview with the Bay Area Reporter to discuss her first year on the job. "The companies we work with are extremely attuned to that and want to attract the best talent."

It is that tenet of business that Out & Equal wants to harness as it embarks on its work in the South. The initiative stemmed out of hearing directly from employees of companies, such as Cracker Barrel, Walmart Inc., and others with large footprints in the region, and the challenges they face in states like Alabama and Mississippi that lack workplace protections for LGBT people.

Both states are on the banned travel lists maintained by the state of California and the city of San Francisco restricting the use of taxpayer dollars to pay for unnecessary trips to either. In fact, of the 10 states that landed on the "no-fly lists" for adopting anti-LGBT laws, all but two — Kansas and South Dakota — are located in the South.

Nonetheless, Out & Equal is using its southern initiative to emphasize that the adoption of anti-LGBT laws by state leaders shouldn't preclude companies located in them from ensuring they are protecting their LGBTQ workforce.

"We want to provide specific content and conversations in these regions that are relevant to these companies," said Uritus. "What we know to be true is that companies have a very big footprint, not just in the U.S. domestically but around the world frankly. These companies are trying to make sure their inclusion policies are broad enough to include all employees."

Out & Equal started in San Francisco in 1996 and also has staff in Washington, D.C., where Uritus is based. Last January, she succeeded the group's founder and former CEO, Selisse Berry, who stepped down in August 2017. Uritus oversees a staff of close to 20 people and a budget set this year at $7 million.

Uritus, 45, who identifies as pansexual and queer, is a divorced mother of two daughters. She has worked in Africa and the Middle East during her professional career, and has been involved with Out & Equal in various capacities since 2002.

As she told the Business Briefs column shortly after becoming CEO last January, she devoted her first year on the job listening to the agency's various stakeholders and creating a new strategic plan for it. She credits her doing so with helping to ensure there was a smooth transition with the leadership change, something she recommends incoming executive directors or CEOs of other LGBT nonprofits also undertake when following in the footsteps of longtime leaders of their agencies.

One issue that came up in her talks with corporate leaders was their desire to understand the terminology being used by younger LGBTQ employees, who are more likely to eschew calling themselves gay or lesbian and instead use terms like queer or nonbinary. How best to address the needs of transgender employees also came up a lot in her discussions, said Uritus.

"Companies already have an appetite to take being LGBTQ inclusive further," she said. "We were walking the talk of our mission."

Another top priority for Uritus is expanding the agency's global focus.

Having already established a foothold in the country, Out & Equal used its relationships with Brazilian business leaders to confront head-on the homophobic views and anti-LGBT policies of the country's new president, Jair Messias Bolsonaro. Working with executives from JP Morgan Chase & Co. based in Brazil, the nonprofit was able to recruit a number of business leaders, who tend to be more conservative, to sign on to a letter that explained why equality was important for their companies.

"What we are excited about is seeing big, multinational companies leading the way to build these corporate alliances on LGBT issues in countries overseas," said Uritus.

Rather than retreat from the trio of countries because their leaders are pursuing anti-LGBT policies, Out & Equal plans to remain and further bolster the work it has already been doing in global business circles to fight for acceptance and equality.

"It is really important we do business the way we have been globally, by building up these relationships and not helicoptering in to do this work and then we leave," said Uritus.

To learn more about Out & Equal, visit its website at https://outandequal.org. 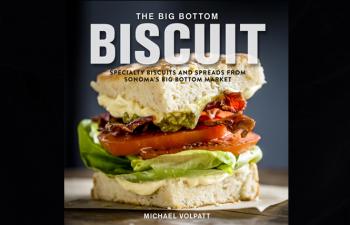 Biscuits are the stars of of "The Big Bottom Biscuit" cookbook.

Guerneville store releases cookbook
The owner of Big Bottom Market in the gay resort town of Guerneville has released a cookbook tied into the store's beloved biscuits.

Titled "The Big Bottom Biscuit: Specialty Biscuits and Spreads from Sonoma's Big Bottom Market," the 192-page hardcover tome costs $18 and is being published by Running Press, a division of Hachette. In addition to including the recipe for the biscuits, there also various ideas for dishes to serve with them, like Moroccan chicken and pulled pork.

"Big Bottom Market is known for our biscuits," said co-founder Michael Volpatt. "Oprah (Winfrey) in 2016 named our biscuits and honey one of her favorite things. We have been riding that wave ever since that announcement ... it really transformed the business."

Volpatt, a gay man and PR professional, partnered with several friends to open the specialty grocery in 2011. It was part of a wave of new LGBT-owned businesses that brought a hipper, more urban vibe to the Sonoma County town's commercial district.

Five years ago, Volpatt first pitched the idea of writing a cookbook. After deals with two other publishers fell through, he inked a contract with Running Press, which released it April 30. It features 53 recipes, including numerous ways to enjoy the biscuits.

Volpatt, who refers to the cookbook simply as "Biscuits," teamed with photographer Kelly Puleio, who lives in San Francisco's gay Castro district, and food stylist Matt Jernigan, a creative director who has worked with Pottery Barn and California Closets, to create the sumptuous imagery to illustrate the recipes.

"The nice thing about the book is that the biscuit recipe is easy to make," said Volpatt. "And there are so many other recipes beyond the biscuits that you can make without the biscuits."

As for the signature baked goods, the recipe is a hodgepodge of ingredients and techniques from various recipes that the market tested out to come up with its own.

"We make them from scratch, the biscuits," said Volpatt. "The recipe we came up with on our own. It is a combination of recipes cobbled together to be something we love and our customers love."

To learn more about the business, visit its website at https://www.bigbottommarket.com/.

Castro sidewalk sale returns
As is tradition, the Castro Merchants business association is hosting a sidewalk sale this weekend to coincide with the annual Small Business Week.

Stores throughout the gayborhood will be taking part by setting up outdoor tables of merchandise Saturday, May 11. While there is no set timetable, it usually runs between 10 a.m. and 5 p.m.

Honor Roll
As part of the city's observance of Small Business Week, Mayor London Breed honored nine local businesses, including the queer-owned El Rio. Designated a legacy business by the city, the Mission district bar received a Community Leadership Award from the mayor during a private City Hall ceremony Wednesday.

"El Rio has a long history of supporting the neighborhood and the community, and offering a welcoming place for everyone — regardless of who you are or who you love — to gather and enjoy themselves, especially on the dance floor," stated Breed.