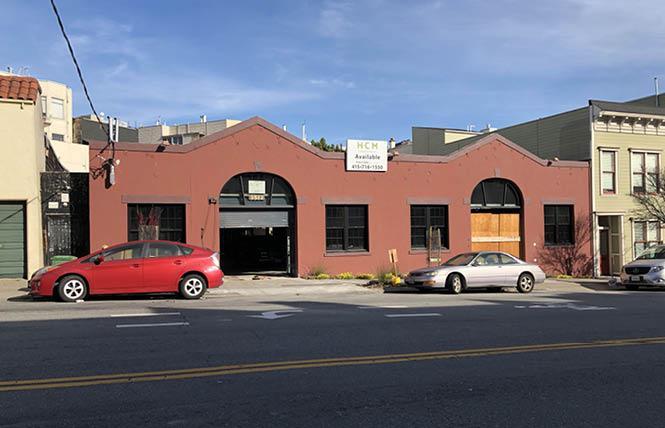 A real estate firm and an LGBT social club in the Castro both secured the permits they needed from the city's Planning Commission this week.

At its April 4 hearing, the oversight body unanimously voted to award a conditional use permit to The Agency, which was founded in Los Angeles, so it could relocate its San Francisco office into the former Volvo Centrum garage at 3512 16th Street. The large space has been empty since 2016 when the garage owner retired.

The planning commissioners also voted unanimously to allow the Academy, a social club with 300-plus members, to remain in the historic gay bar space at 2166 Market Street it has leased since 2017 and use the outdoor yard it remodeled into a patio. But the oversight panel asked planning staff to report back in six months if there were any issues from usage of the rear yard for residents of the adjacent Twin Peaks single-room-occupancy hotel.

Both businesses have gay owners and received widespread support from the Castro's merchant and residential groups as they are seen as contributing to the revitalization of the gayborhood's commercial corridor. As the Bay Area Reporter has noted in previous stories, upper Market Street has seen a glut of empty storefronts due to the closure of multiple restaurants, a grocery store, and other businesses while new developments have added thousands of square feet of additional retail space that has been hard to fill.

In the case of The Agency, it merged last year with the Noe Valley-based The Swann Group real estate firm owned by Rachel Swann, a lesbian who became the local managing partner of the combined company. It expects to move 75 to 100 employees now working at different sites in the city into the nearly 9,000 square foot headquarters it will build just off Market Street on 16th Street across from the Eureka Valley/Harvey Milk Memorial library branch.

"We are looking for a big space to kind of call home," Swann told the commissioners. "We have a small kiosk in Noe Valley but don't have enough space for everyone who works for us."

While the 16th Street office will be closed Sundays, it will be open Mondays through Saturdays. Not only will it draw The Agency's employees to the Castro but also the firm's numerous clients, noted Swann.

"I know the daytime foot traffic in the Castro suffers out of all the neighborhoods in the city," said Swann. "We are excited to revitalize that area."

Gay planning commissioner Dennis Richards, who has business ties to Swann, recused himself from voting due to living within 500 feet of the property. Because the site is somewhat off the beaten path, the remaining commissioners voiced no objections to the real estate firm's plans.

"I think it is a good use," said commissioner Rich Hillis. "I wouldn't want to see it on a main commercial corridor. But it is off the main drag; I move to approve."

Social club agrees to sound limits
As for the Academy, gay co-owners and friends Nate Bourg and Paul Miller opened it May 31, 2017 in a space that once held a clock store, which closed in 2015. Decades ago the site was home to the notorious gay bar The Balcony.

"We feel we are offering something unique to the neighborhood," Bourg said at the hearing.

Miller noted that if someone wants to go out and enjoy the Castro and its LGBT history, there is little to do at night outside of the gay bars and clubs. At the social club, which is open in the evening Tuesday through Saturday, members can join book clubs, hear from invited guests and nonprofit representatives, and make new friends and social connections, he pointed out.

"I am a San Francisco native and grew up coming to this area a lot," said Miller. "I always found it challenging because if I've already eaten and don't want to get a drink there are actually not that many opportunities to do something outside of your home."

When they first opened, Bourg and Miller had planned to have more of a retail component since they were moving into a storefront. They envisioned selling the home decor items they selected to decorate the space — it feels like stepping into a well-appointed baroque living room — and leased the sidewalk fronting glass-enclosed space to two barbers.

While the barbershop component remains, the Academy no longer sells furnishings. That led to someone filing a complaint against the business last year. In addition to seeking a permit to be designated as a general entertainment use, Bourg and Miller also sought permission to use the patio space.

Due to the windows of many of the adjacent hotel's rooms looking out onto the patio, Richards had suggested limiting use of the outdoor patio to 9 p.m. but relented at the request of the social club owners to keep it at 10 p.m. He did move to restrict the use of amplified sound out back to only a handful of days tied to gay street festivals and major holidays when the club could make use of the patio until midnight.

"They did a really good job on the space. I really absolutely support the business and the change of use," said Richards. "We did go outside, however, and outdoor areas tend to be problematic."

At the suggestion of fellow commissioner Kathryn Moore, Richards moved to have planning staff come back in six months to report if there were any issues for the hotel tenants with usage of the patio. The commissioners requested that the planning staff send all of the tenants a letter inquiring about the issue and informing them of how they could contact the social club directly should there be a problem.

"The activities would be quiet conversation, a place to read and work on laptops, and the occasional reception. We rent out the space to nonprofit organizations for free," said Bourg. "We are totally fine with the limitations on amplified music."

Memberships for the Academy begin at $99 a month, with yearly dues of $100, and provide unlimited access to the space. To learn more about the social club and how to become a member, visit its website at https://academy-sf.com/.