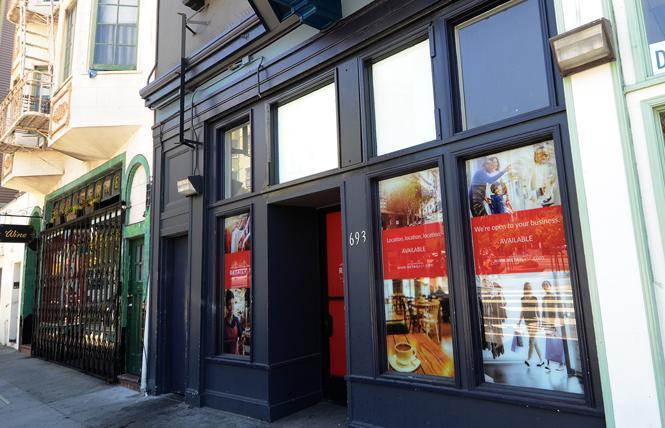 An improvement association for the gay Castro district has won approval to move its offices into a vacant storefront, giving it a prominent location in the neighborhood for the first time as it seeks to be renewed.

The Castro/Upper Market Community Benefit District will relocate into 693 14th Street. Snowbright Launderette, the former longtime occupant of the retail space just off Market Street, closed at the end of January.

At its meeting this afternoon the San Francisco Planning Commission voted 6-0 to convert the zoning for the 1,031 square foot ground-floor retail space from a general retail sales and service use into a public facility use. The oversight body did not discuss the permit request and approved it as part of its consent calendar.

CBD Executive Director Andrea Aiello could not be immediately reached for comment. In May, she had told the Bay Area Reporter that having a more visible office location would allow the CBD to hang up "a sign and people could see where we are. We will become so much more visible to the community and accessible, which would be so, so good."

It plans to hold its various board and committee meetings, which are open to the public, at the location as it will be ADA accessible. Once its permits are finalized, the CBD should be able to move into the space within the next month or two.

It is currently in the process of seeking its renewal by the property owners within its district boundaries. As part of the renewal process, it is examining if its borders should be expanded.

As for relocating its office, the CBD had unanimous support from Castro neighborhood groups for taking over the former laundry space.

"Although we generally take a dim view of projects which seek to convert retail space to an office use, because such conversions are detrimental to a vibrant retail environment, this project is the exception," Duboce Triangle Neighborhood Association Land Use Committee Chair David Troup wrote in a letter to planning officials. "The location in question is around the corner from Market St. on a largely residential side street, and thus is not likely to be a successful space for retail."

Troup added that the CBD "is a neighborhood-serving entity that needs to have a central location in the neighborhood from which to coordinate its many activities, which directly benefit our greater neighborhood and especially all of its retail businesses."

Castro Merchants President Daniel Bergerac agreed, writing in his own letter to planners that the new "location will better allow the Castro CBD to consolidate its varied operations and services. It also will provide a street-front location that will improve the Castro CBD's visibility in the community it serves so well."

"We have been serving seafood at this location to the local community for over 12 years. We have seen the neighborhood go through many changes over the years and have never seen as many vacancies near our address as there are now," wrote owner Dylan MacNiven. "We have been a long time supporter of the mission of the Castro Community Benefit District organization and are excited at the prospect of being their next door neighbor."

That section of the neighborhood, centered on the intersection of Church and Market streets, has seen a host of longtime businesses shutter over the last year as well as new ones open. One of the most visible corner spaces, 2101 Market Street, finally saw Santa Cruz-based Verve Coffee Roasters open its first location in the city in early 2017.

Kitty corner across the street at 2099 Market Street, which in the 1990s housed the headquarters for savings and loan association Continental Savings of America, Compass Real Estate recently opened in the prominent storefront. Nearby, Boombox Fitness, a private training studio, took over 2109 Market Street, which had housed the shoe retailer Good Feet.

All of the retail spaces, including the one the CBD has a lease for, are controlled by the property management firm Veritas Investments, Inc. It has been working to seismically upgrade some of its properties at that intersection, leading to several of the vacant storefronts, while a few of its commercial tenants have closed their doors, such as Sparky's Diner at 248 Church Street and Crepevine at 210 Church Street.

Seeing the area's retail environment be revived is a top priority for gay District 8 Supervisor Rafael Mandelman, who organized the meeting between Veritas and the community representatives. Mandelman, elected this week to a full four-year term, is expected to seek a variety of zoning changes and regulation updates in 2019 aimed at making it easier for new businesses to open along the upper Market Street corridor.