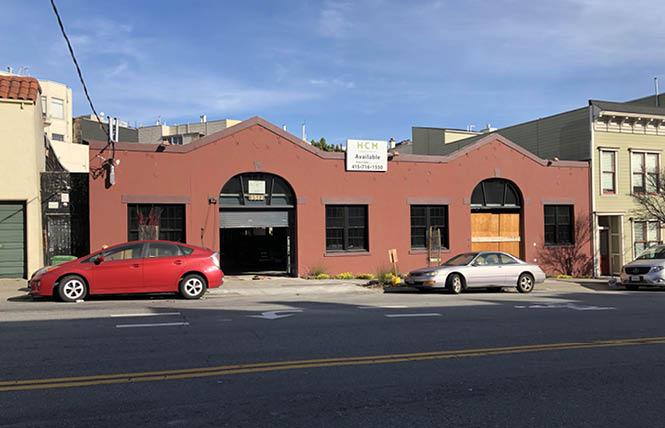 A real estate firm is seeking to move into a vacant Castro auto space where housing had been proposed.

The Agency, which was founded in Los Angeles, is looking to relocate its San Francisco office into the former Volvo Centrum garage at 3512 16th Street. Last year, it merged with the Noe Valley-based The Swann Group real estate firm owned by Rachel Swann, a lesbian who became the local managing partner of The Agency.

The firm would house up to 60 agents in the 16th Street building, a historic brick structure near Sanchez Street. While the firm would utilize the space seven days a week, it would allow local community groups to make use of its conference rooms to hold board or committee meetings at night.

"We like to work as a family, not just within the agency, but with the local merchants," said agent Zhane Dikes, who specializes in working with local sports teams in finding housing for their players and staff.

The Agency has a five-year lease for the 8,700 square foot space and an option to renew for another five years. The firm must seek a conditional use permit from the city's planning commission in order to rezone the building for use as a professional office as well as to remodel the interior.

"It has been vacant for some time for a variety of reasons," said consultant Boe Hayward, who worked as a legislative aide for former District 8 Supervisor Bevan Dufty and is now a principal co-owner of Lighthouse Public Affairs. "It is a historic building, which is probably why it has been vacant for so long."

As Socketsite reported in March 2017, Steel Arc Properties, a.k.a. the Martin Building Company, had bought the property for $4.6 million last year and planned to add two modern stories to it to house twelve apartments. The plans also reportedly called for a new 3,300-square-foot restaurant, 2,000 square feet of other commercial space and a 262 square foot "medical office" on the ground floor.

But the proposed design raised questions, and the plans were shelved. The property was put up for lease with an asking price of mid-$40s per square foot. According to HC&M Commercial Properties, the entire building was seismically upgraded and renovated with new power, sandblasted brick and ceiling trusses, a brand new polished concrete floor and new storefront entry systems.

Some new plantings were added in the sidewalk area fronting the building. It has been a magnet for the homeless, who have periodically camped there at night in tents over the last two years. Having the real estate firm move in would help to activate the entire block, argued Hayward in presenting The Agency's desire to relocate there to the Castro Merchants business association at its meeting this morning.

"We know along 16th Street, particularly due to the lack of activity with this building, there has been a lot of street behavior," said Hayward. "If you activate the space you decrease that behavior."

Gina Blancarte, an agent with The Agency who returned to the Bay Area last year in order to help open the Noe Valley office, said the firm welcomes suggestions on how to use the proposed Castro office at night and on weekends.

She added it is unclear if the firm will keep its Noe Valley location.

"Our home base will be at the Castro," she said.

The merchants group voted to support The Agency moving into the building.

"This is really behind the scenes. It is not on the footprint of what I consider to be the main retail corridor," said Daniel Bergerac, president of Castro Merchants who owns a dog grooming business on Castro Street. "That is why I think it is a good fit for the neighborhood."

The Agency has yet to submit its permit application with the planning department. It is hoping to first garner neighborhood support, said Hayward, in order to request an expedited approval timeline.