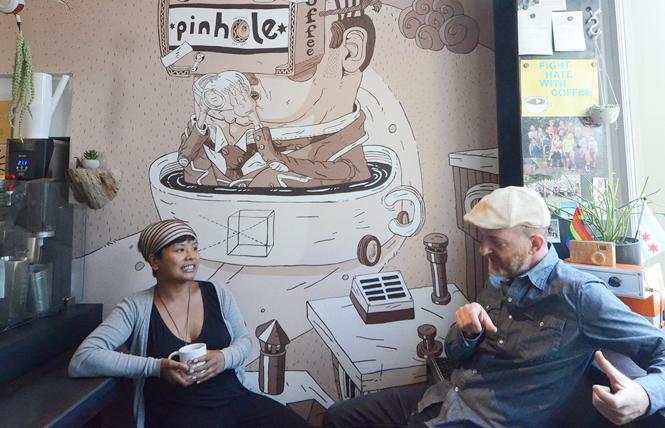 Working as a manager of Blue Bottle Coffee's Hayes Valley location, JoEllen Depakakibo learned what it takes to run a successful coffee business. She decided to use that knowledge to open her own coffeehouse.

Having spent five years searching for the right location, Depakakibo signed a lease for a storefront in Bernal Heights after making an opportune phone call to a local plumber who happened to own the building and was looking for a tenant.

"I actually didn't know Bernal Heights that much. I thought it was in Daly City, I was so detached from this part of town," recalled Depakakibo, who grew up in Chicago and moved to the Bay Area in 2006.

This September 12, Depakakibo will mark the fourth anniversary of opening Pinhole Coffee at 231 Cortland Avenue. It is named after the cameras that produce images without the use of a lens, an image capture technique that Depakakibo not only loves but also does herself.

"It is symbolic of taking something small and making it big," said Depakakibo, 35, who now lives in Oakland with her wife, Robin Quinn, a nurse who also formerly worked for Blue Bottle.

Despite being unfamiliar with the neighborhood, Depakakibo found it to be "a magical pocket" worth taking a risk on to launch her business.

"A lot of people do live in this neighborhood, so it wasn't a concern for me. I believe in that motto of, 'if you build it, they will come,'" she said.

Steve Anker, who has owned a home in the area since the 1990s and also lives in Los Angeles, has become a regular when he is in town.

"It is a nice place to hang out," he said. "Most important, they make great coffee."
Since opening her doors, Depakakibo has been embraced by the neighborhood, she said. The business, whose staff is majority queer and female, raised $14,000 during this year's Pride Week for two LGBT nonprofits.

"This neighborhood is very special. It is very much run by small businesses and the community," said Depakakibo.

It is also home to nearly a dozen LGBTQ-owned businesses, according to a list Depakakibo compiled this summer. It is a little known fact that she is trying to promote in order to attract more LGBT customers, locals and tourists alike, to the commercial corridor.

"I don't think it is a secret, but we are not the Castro," said Depakakibo, pointing out how Bernal Heights is not as well known outside of the Bay Area as the city's more famous gay district.

And while not as centrally located as the Castro, which is home to two Muni subway stations, Bernal Heights is easily accessible via Muni's 24-Divisadero bus line that also runs through the heart of the Castro. From the bus stop fronting Castro Street at Harvey Milk Plaza, above the Castro Muni Station, board a bus headed outbound to the Bayview and within 20 minutes it will arrive on Cortland Avenue, the main commercial corridor for Bernal Heights. 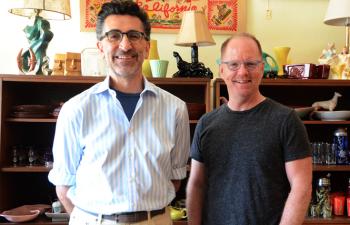 The neighborhood being a somewhat hidden gem was a draw for Stacie Pierce, who opened Little Bee Bakery at 521 Cortland Avenue in October 2013. The former pastry chef at celebrated restaurants Chez Panisse in Berkeley and Foreign Cinema in San Francisco decided to go into business for herself in order to spend more time with her daughter, who turns 8 years old this month.

"I really like the intimacy of Cortland Avenue. I like being off the beaten track," said Pierce, 46, who makes the most of her 600 square foot space, which has enough room for a table at the front window that seats six.

There is an influx of people on Saturdays, said Pierce, due to the weekly Alemany Farmers Market held that morning.

"On weekends we are definitely a destination for people," she said.

Pierce and her wife, Adria Nelson, have lived in Bernal Heights since 2004. When they had their daughter, Charlotte, she took a six-month leave of absence from Chez Panisse but started selling homemade pastries and dough as a side gig. After going back to work, Pierce grew tired of the commute and opted to take a chance on opening her own bakery.

It is named after the nickname the couple gave their daughter as a baby. In addition to selling pastries and cakes, Pierce conducts baking classes for up to seven people at a time. She doesn't do many wedding cakes, as the trend now is for dessert buffets featuring small bites of different sweets for guests and a small cake for the couple to cut.

"I will do gay wedding cakes, obviously, you don't have to sue me," she joked.

While she doesn't think of her bakery as a gay business, just one that happens to be owned by a gay person, Pierce nonetheless enjoys being located in a neighborhood that embraces LGBT merchants.

"This neighborhood is so chill about it. I feel fortunate it isn't an issue," she said. "I like that we can point it out and celebrate it."

One of the oldest of the LGBT-owned businesses is Bernal Beast, the pet store at 509 Cortland Avenue that Tony Chrisanthis, 63, opened 24 years ago this September. The San Francisco native, who is gay, had moved into the neighborhood 12 months prior and saw a need for a local pet shop.

"All the merchants here are great, whether gay or straight. We have a nice camaraderie," said Chrisanthis, who recalled decades ago a number of the stores would have floats in the annual Pride parade.

The biggest change impacting the local retail scene has been the advent of online shopping, said Chrisanthis. He dropped plans to open a second location and started his own website - http://www.bernalbeast.com - four years ago in order to compete.
He now has customers from across the country who regularly order from him. And 10 percent of his online sales are donated to pet rescue groups.

"Online has really taken a toll on every merchant. It doesn't matter if you are gay or not. It has been the biggest drawback," said Chrisanthis.

Employing a staff of eight, Chrisanthis has no plans to close his physical location. He and his employees provide a valuable service for their customers, who often come in with questions on how best to care and feed their pets.

"I want to keep the store as viable as possible," he said.

The newest LGBT-owned business to open is the home décor store Bernalese at 307 Cortland Avenue, which welcomed its first customers July 14. Married couple Sean Minnig and Matthew Evans, who live three blocks from the store, launched the business as a way to share their love for antiques and contemporary housewares.

"We always fantasized about having a little shop," said Minnig.

It is also the only place in the U.S. to sell the handmade whimsical wooden items made by the Italian company Bartolucci. They carry cartoon animal magnets and children's items like holders for toothbrushes with hourglass timers or teeth to be given to the tooth fairy.

Minnig, 59, who recently retired after a 25-year career in the tech industry, joked they decided to open the store "so we could work harder in retirement."

Evans, 54, will be retiring in October after working for 33 years as a budget analyst at Cal State East Bay in Hayward. Bernal Heights residents for 10 years, they have felt embraced by the neighborhood since opening the store.

"So far it is going very well. We had more sales in our first 10 days than we expected," said Minnig.

Across the street at 328 Cortland Avenue, Barberella owner Cid Peaters has also felt welcomed since she started working at the hair salon 11 years ago. Within six months she had bought the business from the former owner.

"It's been a great ride," said Peaters, a second-generation San Francisco native who grew up in Noe Valley.

The lesbian cosmetologist, who said she always keeps her age "hush, hush," explained that the name of her salon is not an homage to the movie starring Jane Fonda. Rather, it came from her late father always introducing her as a barber instead of as a hair stylist.

Having only known of two other LGBT-owned businesses on the street, Peaters was surprised to learn how many there are now. Her clientele, and that of the two other cosmetologists that work out of her salon, come from all over the Bay Area.

"We have been very fortunate," she said. "It is a lot of work, but fun too, and you get to do what you love."