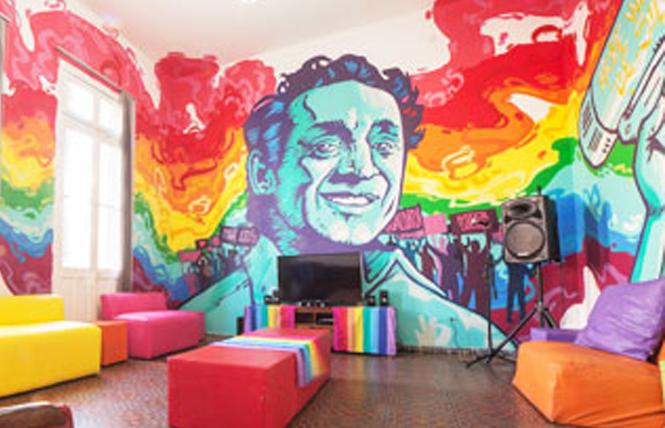 Paraguayan artist Oz Montania's mural of Harvey Milk is painted inside the Paraguayan LGBT Community Center, in Asunción. He will recreate it in the Castro.

A new mural honoring the late gay Supervisor Harvey Milk will be unveiled in San Francisco's Castro district May 22 as part of the local festivities taking place this year to mark Harvey Milk Day, an annual day of special recognition in the state of California.

Paraguayan artist Oz Montania will recreate the mural he painted inside the Paraguayan LGBT Community Center, known as SOMOSGAY, located in the South American country's capital city Asunción. It features Milk holding his now famous bullhorn stamped with his promise "Hope will never be silent."

The mural will be painted on the exterior of the building housing gay nightclub The Cafe at the corner of Market and Castro streets and be visible from Harvey Milk Plaza across the street. It will be in a rectangular space below and to the left of the dance club's covered balcony that fronts the intersection.

The artwork is also the inspiration for the label on the commemorative bottles Stolichnaya vodka is releasing this year to honor Milk. The company is flying Montania to town the weekend prior to Milk day so he has enough time to paint the mural prior to its public unveiling the evening of May 22, tentatively scheduled for 7 p.m.

Following the event, Stoli will officially debut to the public the Milk vodka bottles at 9 p.m. inside The Cafe. Singer Debby Holiday is scheduled to perform at both unveilings.

As the Business Briefs column first reported in January, Stoli's special Milk bottle marks the first time it has honored an LGBT individual with such a tribute. A limited release of 50,000 bottles - half sized 1 liter and the others sized 750 ml - will be produced so that they are seen as a collector's item.

The prices will range $21-30 for the larger bottles and $18-25 for the smaller ones depending on where they are sold. According to Stoli, 2,112 will be available for purchase in San Francisco and 1,056 will be released in Oakland. The company is not adding a surcharge for the Milk bottles.

"I wish we had more to meet the demand I am already seeing," said gay San Francisco resident Patrik Gallineaux, who is the national LGBT ambassador for Stoli USA.

Milk's election to his board seat in 1977 made history for being the first time an LGBT person won elective office in the city as well as the Golden State. He and then-mayor George Moscone were assassinated inside City Hall the morning of November 27, 1978 by disgruntled former supervisor Dan White.

Over the last four decades Milk has become a global icon for the LGBT community. Since 2010 California has annually celebrated Harvey Milk Day on May 22, as that was the day Milk was born in 1930.

Stoli made "a significant donation" to the Harvey Milk Foundation for its permission to release the special Milk bottles this year, Gallineaux told the B.A.R., and continues to fundraise for the nonprofit. The auctioning off of bottles at recent East Coast fundraisers netted more than $10,000.

During a recent visit to see Mayor Mark Farrell sign legislation naming Terminal 1 at San Francisco International Airport in honor of his uncle, Stuart Milk told the B.A.R. that the foundation had suggested to Stoli that it use the Paraguayan center's mural as inspiration for the label on the special vodka bottles since Milk is now a global figure.

"He is providing inspiration to LGBT people. In certain parts of the world it is still very dark for LGBT people, like in Paraguay," noted Stuart Milk, who is scheduled to attend the bottle and mural unveiling events.

While he is "not a big drinker," Stuart Milk said he does like Stoli. The company has had ties with the Milk foundation since Stoli became a target of boycott calls during the 2014 Winter Olympics in Sochi, Russia due to the country's anti-gay laws.

While it is marketed as Russian vodka, the company is headquartered in Latvia, one of the Baltic states. Due to Milk being of Lithuanian descent, the Milk foundation has focused on the region in northern Europe, which also includes Estonia. The nonprofit has partnered with Stoli to host an event during Baltic Pride 2018, which takes place the first week of June in Latvia's capital Riga.

"In all three nations there, it is hard for LGBTs," said Milk, adding that when Stoli was being attacked ahead of the Olympics, he received calls from LGBT leaders in Latvia concerned the local community would be blamed.

Host of Harvey Milk Day events in SF
Several other events are taking place in the city to celebrate Milk day this year.

On May 22 the Harvey Milk LGBT Democratic Club will present, for the 4th year in a row, the documentary "The Times of Harvey Milk," at 6 p.m. at the Castro Street Theater. Tickets begin at $10 and can be purchased online at https://www.eventbrite.com/e/the-times-of-harvey-milk-screening-for-harveys-88th-birthday-tickets-45261416114.

The Castro Merchants business association is bringing back its Windows for Harvey, which partners local artists with stores in the gayborhood to present artwork inspired by or honoring Milk. It will run from May 18-27; for a list of participating locations and artists, visit the website https://www.windowsforharvey.com/.

A neighborhood celebration of Milk will be held at 11 a.m. Saturday, May 19, in the lower level of Harvey Milk Plaza above the Castro Muni Station. After brief remarks by community and elected leaders, attendees will be invited to march to 575 Castro Street, where Milk had his camera store.

This is the third "Shop OUT Day" event the Noe Valley Merchants and Professionals Association has hosted. It began in 2016 as a nighttime event held during Pride. This year it has been moved up and expanded to be a daylong event.

It includes a party dubbed "Out in the Park!" that will take place from 3:30 to 7 p.m. in the Noe Valley Town Square, the public plaza at 3861 24th Street. The Sisters of Perpetual Indulgence will be overseeing bingo games, while DJ Lovetap will provide disco music for dancing from 5 to 7 p.m. Rainbow sherbet will be handed out to attendees.

For a full list of merchants taking part and further details about the day's goings-on, visit the event's Facebook page at https://www.facebook.com/events/230516867513079/.