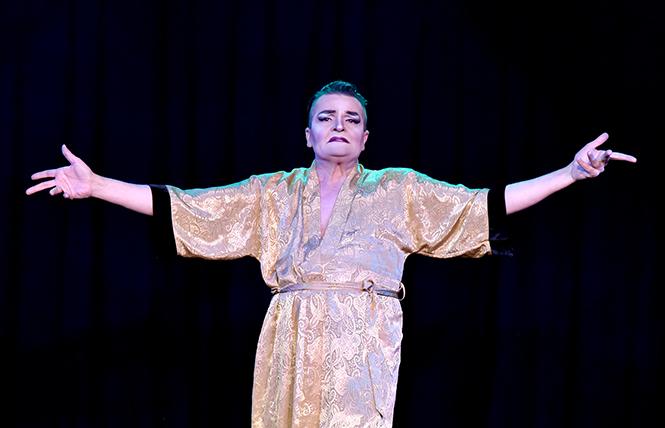 What would queer San Francisco be without our nocturnal animals—the revelers and entertainers and service stars? No post-dusk predation. No moonlit romance. No sweat-soaked dancefloors. No piano bar crooning or dragalicious dress-up. Alas, we're living that nightlife nightmare scenario right now. So let's raise a glass (make it a double), to this year's Nightlife People Bestie winners and all of their colleagues who, in usual times, are there to light up our lives after dark. We asked some of this year's winners to reflect on their awards and this strange moment we're living through.

Best Comic: Jesus U Betta Work
Runners up: Lisa Geduldig, Natasha Muse
Our readers' top choice for the second time in three years, Jesus U. Betta Work, says his performance style was largely inspired by female comics, especially Phyllis Diller. While the flamboyant jokester continues to host his monthly Comedy Fiesta at the San Mateo County Pride Center, he's lately been making his way up and down the coast, from L.A. to Portland. When asked if his material has expanded beyond gay topics, he replied, "Well, gay bottom-ics, too!" Rim shot. Pun intended. We could all use some more laughs right now.

Best DJ: Bus Station John
Runners up: Sergio Fedasz, Lady Ryan
Whether it's intimate nights at Aunt Charlie's, monthly T-dances at The SF Eagle, or guest gigs at other events, DJ Bus Station John turns nostalgia into '70s and '80s R&B and disco grooves that take us back earlier than our quarantine, but before the previous plague, when souls and bodies were close, sweaty and free.

Asked why his mixes bring such joy, he said,"The old-school dance music I shine a light on at The Tubesteak Connection and Disco Daddy was crafted by talented, imaginative humans who could actually sing, play instruments, and write hooks that stand the test of time 40 years later. These tracks have soul, even when created with synthesizers, and soul is what genuinely transports a dance floor."

Asked about our current situation, John said, "By not being able to do what I love, I'm gaining a renewed appreciation for it. Sharing the music I have a passion for with groups of kindred spirits, large or small, truly is a gift. I also have time to tackle the huge task of reorganizing my record collection, and I'm finding lots of gems I'd forgotten about or haven't played in years. I'm excited about breaking them out for future dance floors."

While we wait, enjoy his SoundCloud mix from a recent night at The Stud with Go Bang.
www.mixcloud.com/gobangsf/bus-station-john-at-go-bang/ 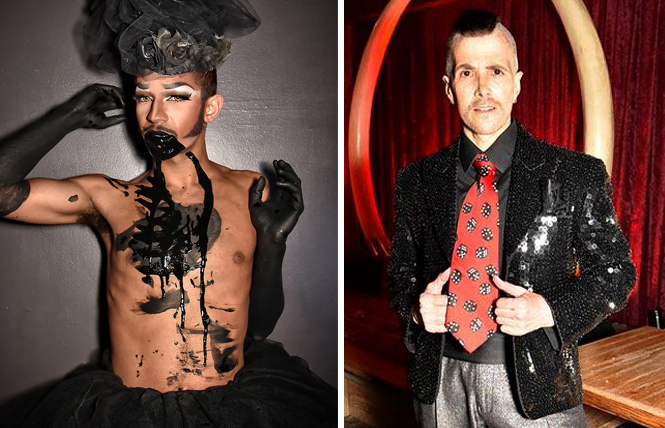 But Betty, who gleefully swings from shaved-head-and-hairy-chest looks to "total glam mode with a huge bouffant weave and a mustache," also notes that "I'm trying to remember that I've been gifted this time to nurture my creativity" and is working on sewing and leatherwork projects. "It's also a trip to be able to sit down and not stress about everyday baloney."

Still, Betty's keeping an eye on the horizon, anticipating a return to the stage at Oasis' Butch Queen cabaret during pride month. Fingers, and dress, crossed!

Best Drag King: Fudgie Frottage
Runners up: Alex U. Inn, Madd Dogg 20/20
Not only the producer of the long-running annual Drag King Contest, Fudgie has changed the landscape of drag and nightlife performance by up-ending gender roles and providing a showcase for women and trans performers to poke fun at masculinity in a variety of ways.

Said Frottage, "Thank you for the Love! I'm so honored to receive this Bestie on the 25th anniversary year of the SF Drag King Contest."

Frottage also has a message of hope.

"Stay strong, friends. Our Community has been through worse. Nightlife waned from AIDS deaths in the early '80s, but it snapped back because of dedicated artists. Ironically nitelife was already waning from chosen social distancing. Hopefully this tough love quarantine will lift soon and make people really appreciate the beauty of live performance and human contact."

Best Nightlife Photographer: Marques Daniels
Runners up: Gooch, Steven Underhill
Highlights of Daniels' past year have included working with several Drag Race contestants at appearances in Sacramento and San Jose, and a regular gig with Ky Martinez' circuit party events—"They lean toward the shirtless, almost naked side, which is always fun!" jokes Daniels. After being a runner up several years, Daniels finally wins the Bestie only to see nightlife grind to a temporary halt.

"I'm so fortunate to have a full time job," says Daniels, who works in IT at a local university. "But I'm worried about so many of my friends who are drag queens and bartenders and performers, because that's their main source of income. My favorite bar is The Lookout and they're selling gift cards with half the money going to the staff, I'm supporting things like that, and I hope everyone else who loves nightlife does too."

Best Live Nightlife/Cabaret Performer: Russell Deason
Runners up: Katya Smirnoff-Skyy, Suzanne "Kitten on the Keys" Ramsey
Best recognized for tickling the ivories at Martuni's Monday night sing-along happy hours, pianist/producer Deason found the silver lining in a layoff from the corporate world and decided to focus on music full-time. He's put together a number of cabaret acts and variety shows, accompanied Katya Smirnoff-Skyy and Donna Sachet, and put together a stirring one-man show, Tough As Nails, which focused on his over three decades living with AIDS.

A week into the Covid shutdown, Deason said "I've been recording backing tracks for a lot of other singers who have been streaming their acts online. And I'll probably do something on Facebook Live, too. This is all starting to feel stifling." 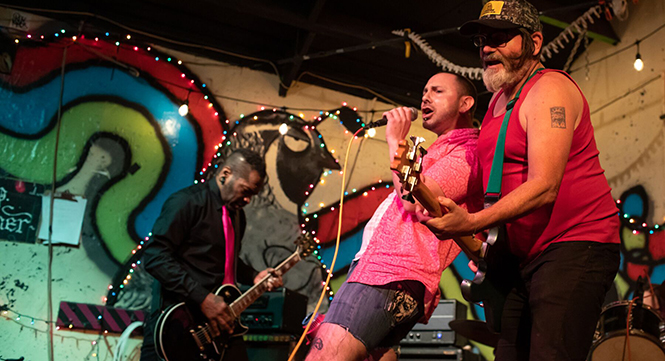 Best Live Band: Middle-Aged Queers
Runners up: Lolly Gaggers, Homobiles
"Given our name, I'm super young," confesses vocalist Shaun Osburn, 40, of the queer core foursome whose two eldest members are in their fifties. The band, which includes former members of punk legends Flipper and Fang, played their first gig just over a year ago and have been embraced in the queer community and beyond. "After we opened a punk show at Slim's, I've had straight couples come up to me when we've played specifically gay venues and say, 'Hey, we saw you at Slim's.' When I realized we got straight people to show up at a leather bar, I was like, hmm...we may be onto something here."
middleagedqueers.bandcamp.com 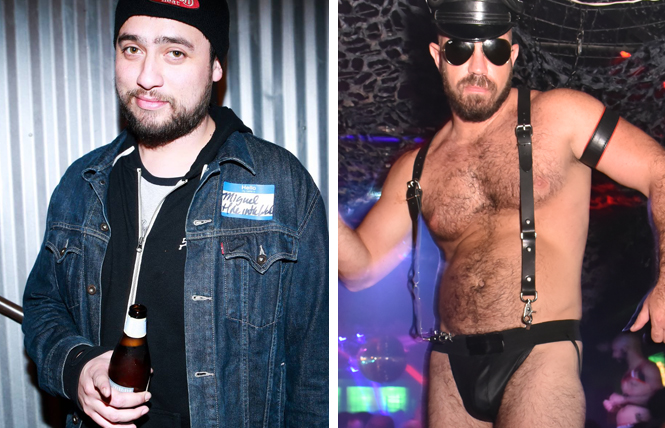 Best Bartender: Miguel Chavez (Hole in the Wall)
Runners up: David Delgado (The Cinch), Mica Sigourney (The Stud)
For the second year in a row, there's been a complete turnover in mixology honorees. Chavez surely speaks for all of them when he says, "Its awesome I won, but this is completely overshadowed now by the Covid-19 shut-down. The bar is going to celebrate its 26th Anniversary on April 15th, but I don't think we're going to be open. I'll have been here for ten years in July and I've loved every minute of it. I live down the street from work, so when I'm not on, I'm often there anyway. It's a big part of my life that I'm really missing right now."

Best Gogo Dancer: Eric Osborn
Runners up: Emerson Silva, Dirt Wolf
Acknowledging the bitter moment we're in even more than his sweet victory, gregarious rump-shaker Osborn texted in a somber assessment of his feelings: "I just have to say that this crisis has put a damper on my ego, let alone my livelihood. But a sense of humility is key with every passing day."