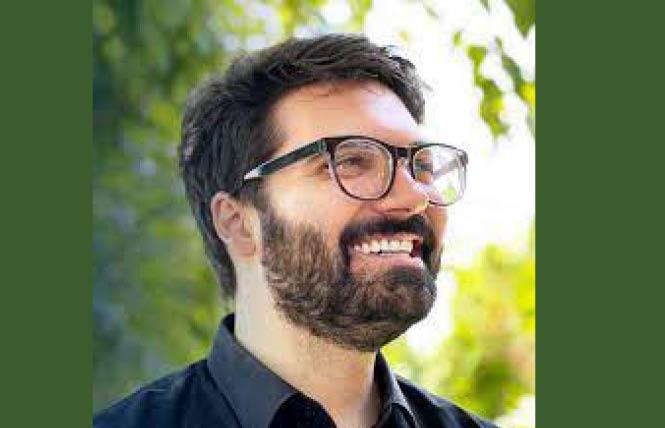 In the California Legislature there have long been lawmakers succeeded by their spouses or their siblings. Last year a daughter, Dr. Akilah Weber, won the special election for a San Diego-area Assembly seat vacated by her mother, California Secretary of State Shirley Weber.

Now Daniel Hertzberg, 30, is running to succeed his father, Senator Bob Hertzberg (D-Van Nuys), who is termed out this year from his 18th Senate District seat. Should he win the race for the state's newly drawn 20th Senate District seat in Los Angeles County, it would mark the first time a LGBTQ child succeeds their state lawmaker parent.

Hertzberg, who is gay, would also be the first out state legislator from the San Fernando Valley. He has racked up considerable support from his father's colleagues in Sacramento and has the endorsement of the Legislative LGBTQ Caucus.

It has led his opponent, lesbian social worker Caroline Menjivar, to accuse the caucus members of "rewarding a culture of nepotism in the State Capitol." She also faulted the caucus for not conducting a formal interview process or considering a dual endorsement of the two out candidates in the race.

"No one in the caucus has individually endorsed me and it doesn't look like anyone will," Menjivar told the Bay Area Reporter in a phone interview. "I question why Daniel got the endorsement. Was it based on his merit or was it based on his father's position of power?"

Hertzberg told the B.A.R. he has earned the support of all of his endorsers not because of his familial ties but because of his having been raised in the district and his own life experiences, particularly his working in the local hospitality industry as it has struggled throughout the COVID-19 pandemic.

"I am not just getting support from electeds from Sacramento. I am getting a lot of local support for a reason," said Hertzberg. "Activists here in the valley, I sat down with them many times and listened to them. They support me for a reason; I am going to be an effective voice in Sacramento."

He added that he "is fighting to win" the race and is reaching out directly to voters in the district for their support.

"Every single vote counts," he said. "I am taking absolutely nothing for granted."

Gay Assemblymember Evan Low (D-Campbell), who chairs the LGBTQ caucus, and his office have not responded to the B.A.R.'s interview requests about its endorsement decision in the race. The caucus historically doesn't send questionnaires to candidates in races seeking its endorsement, and its members are free to individually endorse the opponents of the candidates endorsed by the caucus.

Low did meet individually with Menjivar, as did lesbian Assemblymember Sabrina Cervantes (D-Corona) and gay state Senator Scott Wiener (D-San Francisco) after launching her campaign last August. Wiener told the B.A.R. he liked both Menjivar and Hertzberg "a lot" and that it "is good for democracy" for the voters in the district to have a choice to make in the race.

"It is a campaign; she will raise whatever issues she thinks are relevant, that is totally appropriate," said Wiener. "I got to know Danny and talked to him about the issues that are most important to me. I am convinced he is a smart, thoughtful, progressive person who will do a good job in the Senate. It is why I endorsed him; Caroline is also terrific."

Either of the two would return LGBTQ representation from Los Angeles County to the state Senate, as the area's last out senator, Ricardo Lara, left in 2018 after being elected the state's insurance commissioner. A gay man, Lara became the first LGBTQ elected statewide officeholder and is seeking reelection this year.

Menjivar, 32, is married to Jocelyn Tapia, a marriage and family therapist. Her parents fled El Salvador's civil war for the U.S. and raised her and her younger sister in the San Fernando Valley.

She came out in her youth and attended her first Pride in San Francisco at age 18. When she disclosed being a lesbian to her family, it strained their relationship.

"I continue to have issues," she told the B.A.R.

After she was rejected for a firefighter position with the city of Los Angeles, Menjivar enlisted with the Marine Corps and served under the homophobic "Don't Ask, Don't Tell" policy.

"They came under fire, no pun intended, for hiring family members of firefighters or giving special privilege to them over other candidates. So my name was never chosen," she said, "even though every billboard you would see was calling for more women to join the fire service."

While working as an EMT she earned her bachelor's degree from California State University, Northridge then a Master of Social Welfare from UCLA while working in the Los Angeles Mayor's Gender Equity Office as a David Bohnett Fellow.

Menjivar served as a field deputy with Councilwoman Nury Martinez's office and then as East Valley representative for Mayor Eric Garcetti, where she organized the San Fernando Valley's first ever LGBTQ+ Pride Car Parade. She mapped out a plan to seek elective office six years ago.

"I will bring to Sacramento unique experiences and perspective on what needs to change being on the front lines so long," she said.

In recent days the California Democratic Legislative Women's Caucus joined state Senator Connie Leyva (D-Chino), who is retiring this year, in endorsing Menjivar. Los Angeles County Supervisor Sheila Kuehl, a lesbian who formerly served in the Legislature and represents the San Fernando Valley on the county board, last week also backed Menjivar in the race.

"As a former state senator, I know that her experience as a community leader who has demonstrated a commitment to solving our mental health, homelessness, and climate crises is what is needed in our Senate now," stated Kuehl, who is retiring this year from her supervisor seat. "I strongly support her to work for all our families and to effectively represent the San Fernando Valley and Burbank in the state Senate."

The elder Hertzberg, now majority leader emeritus in the state Senate, this week announced he would seek the newly drawn county supervisor seat covering the Valley, leading to the prospect of seeing the two Hertzbergs campaigning together. Rather than shy away from his father's political legacy, Daniel Hertzberg has fully embraced it as partly inspiring his own candidacy.

"I know I've got big shoes to fill, but I know that together, we can continue the Hertzberg tradition of fighting for the Valley's fair share — and we can also fight for change in Sacramento," he noted on his campaign site.

He told the B.A.R. he came out to his family within the last two years with "no drama." His mother, Karen Moskowitz, is a Los Angeles County superior court judge now married to her wife, Kay Johnson.

"My entire family was wildly supportive," he said. "It was an open secret in my family for a long time."

After high school he moved to Baltimore and graduated from Goucher College in 2014 with a degree in political science. He joked that his wearing glasses "is not for show," as he was always a policy wonk and interested in public service.

He interned for a number of local, state and federal politicians and campaigned for President Barack Obama. But disillusioned with politics Hertzberg ended up getting a job at a small hotel by the Baltimore Harbor. He earned $8 an hour scrubbing toilets and changing bed sheets.

"I loved that job, that hotel, that city," he recalled. "I grew a lot there."

It led to him being reassigned to a hotel the company owned on Long Island in New York. When COVID struck in March 2020, Hertzberg lost his job. He returned home to California, landed a job with a hotel in Carson, and began seriously thinking about a career in politics.

"My mind set was never running for office to be honest, I saw myself as the guy who writes a policy brief or policy memo," said Hertzberg, adding that watching what the country has gone through because of COVID and the previous presidential administration made him conclude "if you really want to make a substantial change or to move the needle, you have got to put your hat in the ring."

It is believed he would be the youngest male senator ever elected in California. Hertzberg told the B.A.R. more people his age should be running for public office.

"Why are there not more young people involved in this is my thought process. Not to throw shade on people not considered young," he said. "I don't feel young. It feels weird to be considered a young gun."

His campaign did a poll to gauge what voter reaction would be to both his age and his sexuality. The results showed neither would be a negative.

"People are excited for new ideas and that level of diversity," he said. "I have not seen even a little bit of pushback on it. It has given me a lot of hope."

As a third-generation resident of the San Fernando Valley, Hertzberg said he cares "greatly" about the community and looks forward to representing its residents in the Legislature.
"I will fight for them to bring home resources for them from the state," he said. "The current senator has done an excellent job showing that kind of values."

Web Extra: For more queer political news, be sure to check http://www.ebar.com Monday mornings for Political Notes, the notebook's online companion. This week's column reported on universal health care being a flashpoint in the special election for a San Francisco Assembly seat.