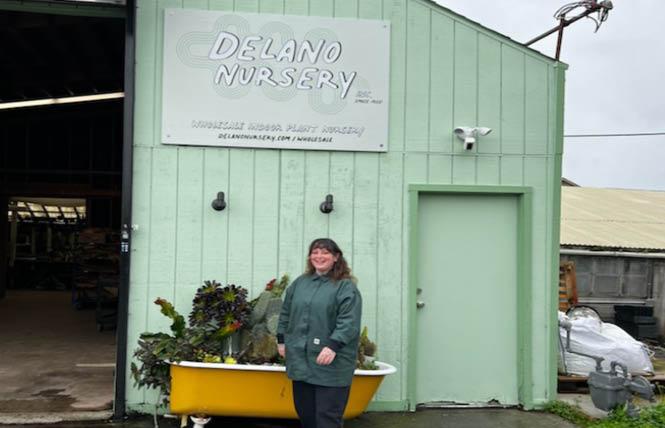 In the coastal community of Pescadero a roughly seven-acre parcel recently was acquired by Delano Nursery where it plans to expand its business and grow more of the plants it sells rather than importing them from overseas. It is just one of the ways the queer co-owned wholesale nursery is planting new roots as it marks its 100th anniversary this month.

"We just got the keys on Thursday last week," co-owner Lauren Borden told the Bay Area Reporter during an interview January 7 at the nursery's Peninsula location. "We plan to start off with a service for other plant shop owners to rent space from us where they can have their plants there, and we will take care of them for them and provide repotting services. They can either keep their more delicate, more expensive plants there or have some extra space for their plants if they don't have space in their shop."

Borden, 29, envisions adding additional greenhouse space and maybe more dwelling units at the new property since agricultural sector workers find themselves priced out of the Bay Area's sky-high housing and rental markets. It also provides security for her business should the day come when the Daly City parcel it rents is put on the market if its zoning is changed to allow for housing.

"This is a really old greenhouse and the value is in the land. It is not zoned for housing, it is zoned for agriculture, but that could change someday," noted Borden, who lives in Oakland.

The Long Beach native initially moved to San Francisco in pursuit of a career in the fashion industry. But she dropped out of fashion school in 2011, realizing it wasn't a good fit, and gravitated toward the floristry and floral design sectors, earning an associate degree in retail floristry at City College of San Francisco.

Seven years ago she started working late-night shifts at the San Francisco Flower Market for John Nicolini. His grandfather started the family's floral business on Delano Avenue in San Francisco, co-opting the street name for that of the nursery.

His relative also helped to found the city's flower mart in 1924, where Delano's continues to operate a wholesale stand. Borden had been working for another florist across from Delano when she approached Nicolini to see if he could use some extra help.

"It was super antiquated. Their record-keeping was all done on paper," recalled Borden, who helped transition the business into using computers. "I asked him if he had ever heard of Square. We had to train a 60-year-old man to digitize his life."

To Nicolini, 67, whose own five adult children sought careers in different fields, meeting Borden was "a godsend," he told the B.A.R. in a phone interview. "She has been an unbelievable thing that happened in my life."

Her green thumb translated into a doubling of the business year-to-year, increasing from $580,000 in sales from when she started to $2.85 million in 2021. Delano also went from having three employees to 18 today.

"John is slowly retiring, and seeing how much trust he had in me and seeing what this company could be, inspired me to stay with it," said Borden.

Nicolini is now in the process to turning over majority ownership in the nursery to Borden as he eyes fully retiring in several years. Seeing how "extremely hard working and extremely honest" Borden was, as well as her adeptness at running a nursery, convinced Nicolini she was the right person to continue on his family's business.

"As we grew together in friendship, my trust just got going with her," he said. "She is like having another daughter."

Were it not for his meeting Borden, the nursery would probably have shuttered for good when his retirement came, said Nicolini.

"This keeps our family tradition going on for many more years, otherwise it probably would have ended with me," he said. "It takes a lot of work and a lot of dedication, and Lauren has that in her naturally. It is a great thing for me to do for her, and a great thing for our family to see the company go into the future."

Borden is part of the steering committee working on the design of the flower mart's new location it will be moving to in lower Potrero Hill, likely in late 2023 or early 2024. The property is owned by the Kilroy Realty Corporation, which is redeveloping the mart's longtime home South of Market into a mixed-use development.

Nicolini had supported the relocation since the current facilities are outdated and the "new facility is going to be beautiful," he told the B.A.R.

Borden added that it "is definitely going to be a San Francisco institution when it gets up and running." She plans to again sell to the public at the new facility.

In November 2019 Delano added a retail component to sell directly to the public from its flower mart location. It was beginning to take off just as the COVID-19 pandemic upended life in March 2020, resulting in the retail shop being allowed to be open only eight hours a week.

On Halloween of that year Borden relocated the Delano Shop to 3289 Mission Street at 29th Street. Last September, it closed down and was later relaunched as Bunk Ass Plants.

"It just wasn't going in the direction I wanted it to be," explained Borden, who is now happier with the new "visually assaulting" design of the store.